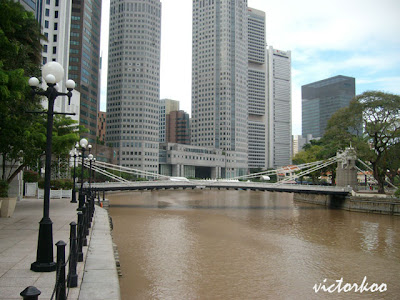 Looks like Old Singapore Quiz (15) was too easy for the oldies old timers. I should have provided a false clue like "mammary organ of a female transformer robot" to mislead you. :p 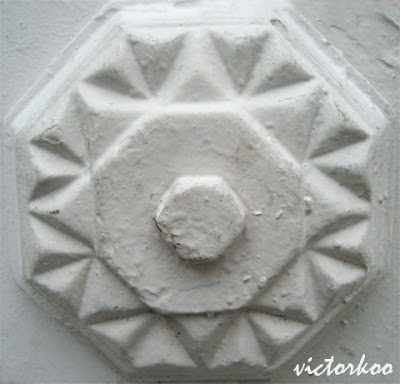 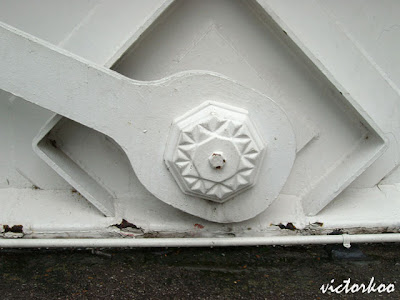 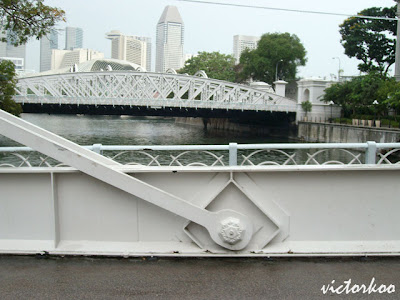 I got a feeling that Icemoon knew the second answer but only gave the first one, i.e. "bolt from a bridge". So gentlemanly of him. Stanley got "One Fullerton" mixed up with "Fullerton Hotel" but I am certain that he knew which bridge it was. YG's guess of Anderson Bridge was close in terms of proximity but far away in correctness. (You can see Anderson Bridge in the background of the last photo.) Ironically, it was someone without a name, i.e Anonymous, who came up with the correct name - Cavenagh Bridge.

The passage below is reproduced from the NHB heritage marker at the bridge: 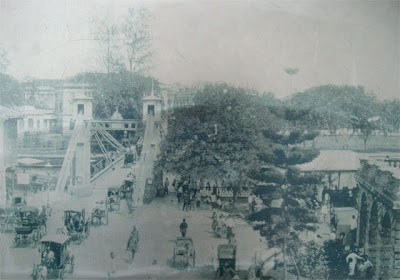 Built in 1869 to link the Civic District on the North Bank with the Commercial District on the South Bank, this is the oldest bridge along the Singapore River in its original design. It is also the first steel suspension bridge in Singapore. Before its construction, access between the two districts was only possible by a detour over Elgin Bridge or by paying one cent for a boat ride. 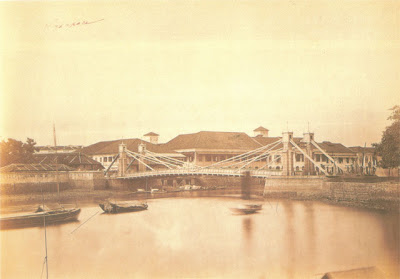 Named after Colonel (later Major-General) Orfeur Cavenagh, the Governor of the Straits Settlements (1859-1867), the bridge was designed by the Public Works Department. 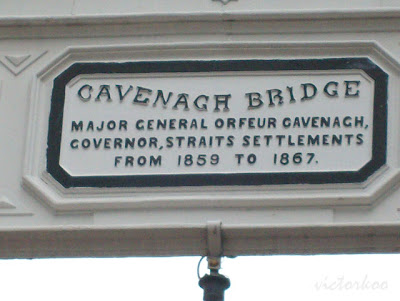 It was manufactured by P & W MacLellan in Scotland and the parts were shipped here and assembled by Indian convict labour. 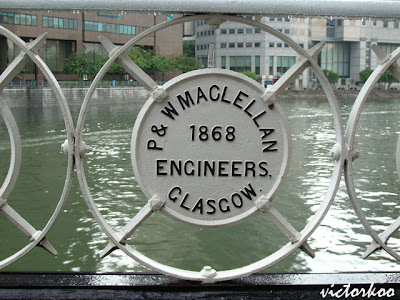 According to the original design, the bridge was to be raised during high tide to facilitate the passage of barges. However, this proved to be technically impossible and it became a fixed suspension bridge. By the late 1800s, the bridge could not withstand the growing volume of vehicular traffic and Anderson Bridge was opened in 1910 to ease the flow. Cavenagh Bridge thus became a pedestrian bridge. 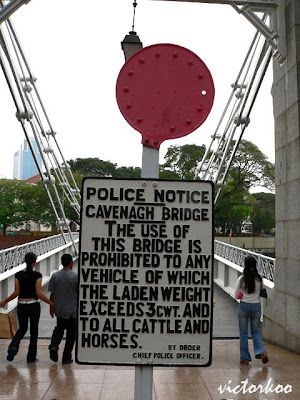 A police notice put up to regulate the use of the bridge, banning heavy vehicular traffic exceeding 3 cwt (hundred weight) or 152 kilogrammes, still stands today at either end of the bridge.

Cavenagh Bridge has been depicted in Singapore stamps at least twice: 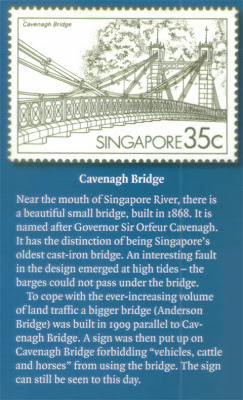 And especially for Icemoon, below is a second shot of the bridge taken from a similar angle as the above stamp. 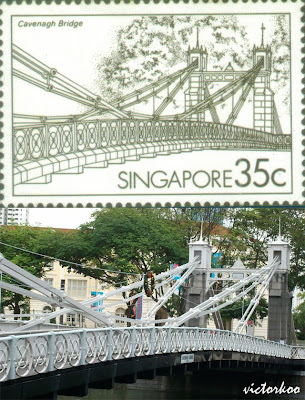 Below is the transcript of the above article which is extracted from the book "Singapore's Monuments & Landmarks: A Philatelic Ramble" by Dr Tan Wee Kiat, Mr Edmund Lim W K and Mr Kevin Tan Y L. (You can read this book for free at Dr Tan's Retrievia blog. Several other philatelic books written by Dr Tan and other co-authors are also available at the blog.)

Cavenagh Bridge - Near the mouth of Singapore River, there is a beautiful small bridge, built in 1868. It is named after Governor Sir Orfeur Cavenagh. It has the distinction of being Singapore's oldest cast-iron bridge. An interesting fault in the design emerged at high tides - the barges could not pass under the bridge. To cope with the ever-increasing volume of land traffic a bigger bridge (Anderson Bridge) was built in 1909 parallel to Cavenagh Bridge. A sign was then put up on Cavenagh Bridge forbidding "vehicles, cattle and horses" from using the bridge. The sign can still be seen to this day.

b. In August this year, Singapore and Philippines jointly issued 4 stamps of bridges to commemorate 40 years of diplomatic relations between the 2 countries. Cavenagh Bridge was depicted in one of the stamps: 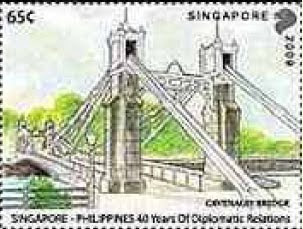 Have you noticed that the values of the 2 stamps, i.e 35-cent and 65-cent, add up to exactly 1 dollar? Well, I believe that this is purely coincidental.

Below are more photos of Cavenagh Bridge: 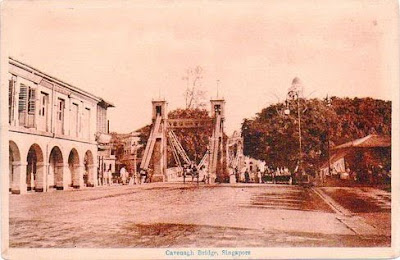 An old postcard of Cavenagh Bridge circa 1920s. This photo was taken from Fullerton Square. You can see the clock tower of Victoria Theatre and Concert Hall in the background of the photo. 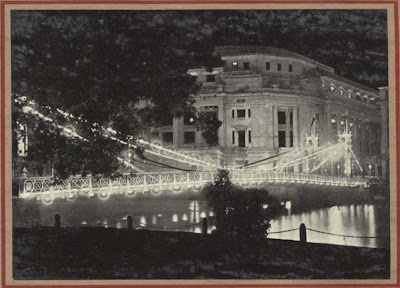 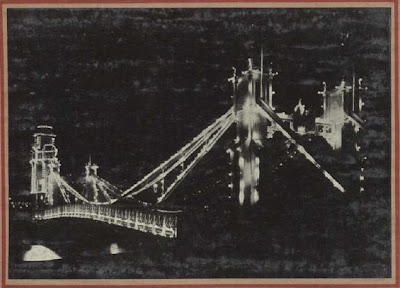 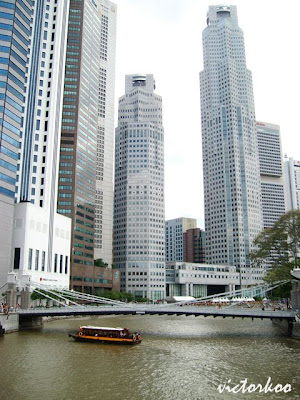 Meticulous in the positive sense. Great, you seem to know all the parts of the bridge. Where did you get all these pictures? I have always wondered where bloggers get their images.
Keep it going Victor. Perhaps you should change your blogsite title to, "A Positive Exposure Of Singapore - Yesterday & Today."

I once (over)heard that the 3 CWT actually refers to some Greek Numerals which is equivalent to 152KG. Can anyone verify? Thanks.

Andy, for those photos watermarked with my name, they were taken by me on location. As for photos without the watermark, they were taken from various sources - books, internet searches, NHB's PICAS website, etc.

Anonymous, according to Wikipedia, cwt stands for centum weight or hundredweight.

And according to this link, 1 cwt = 112 pounds for very good reason:

"Since at least 1400 a standard weight unit in Britain has been the hundredweight, which is equal to 112 avoirdupois pounds rather than 100. There were very good reasons for the odd size of this "hundred": 112 pounds made the hundredweight equivalent for most purposes with competing units of other countries, especially the German zentner and the French quintal. Furthermore, 112 is a multiple of 16, so the British hundredweight can be divided conveniently into 4 quarters of 28 pounds, 8 stone of 14 pounds, or 16 cloves of 7 pounds each. The ton, originally a unit of wine measure, was defined to equal 20 hundredweight or 2240 pounds."

Victor, looking at the second shot, we'd think you created the first shot digitally to match it. :)

I wonder whether it is a crime to ride a horse across the bridge today.