An Unusual Blog And An Appeal 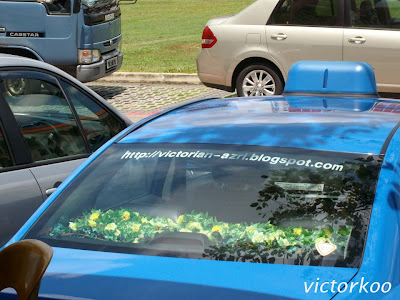 I took this photo on 8 October last year near the famous Sungei Road Laksa stall at Blk 27 Townshend Road. Yes, I was there to defy the PM's order eat the very good $2 laksa with lots of harm (cockles).

Of course, I was not only there just to satisfy my hunger pangs. As usual, I was on a constant lookout for interesting sights for this blog. I spotted this blogsite address displayed on the rear windscreen of a Comfort taxi: "http://victorian-azri.blogspot.com/"

I thought it was interesting for 2 reasons:

2. It was the first time that I saw a blogsite being advertised on a taxi this way. Could it be a taxi driver who blogs?

Afraid that I might not be able to remember the blog address, I took a photo of it. I have forgotten all about this photo until I chanced upon it just now while searching for another photo. I visited the blogsite and was surprised to find that the blog belonged to Muhd Noor Azri Abdul Rahman, a 17-year-old who suffered a cable-ski accident in March 2007 and had a stroke. Azri was then a Sec 4 student of Victoria School and was participating in cable skiing at East Coast Park as part of his PE lesson. He now has a severe dent on his head as part of his skull had to be removed to alleviate swelling in his brain.

I remember reading the article in the New Paper some time last year but didn't pay much attention to it then. The Comfort taxi which I took a photo of that day must have belonged to his dad, Abdul Rahman Abdul Hamid, 45, who is a taxi driver.

Azri's blog is titled "Help For Victorian Azri". However, there are no details on how we could help. I have left a comment there to ask in what way I could help. I could certainly contribute a little money and hope you could too.

On another note, I personally feel that the school should stop having cable skiing as part of the PE curriculum, especially after this accident. I for one would be very reluctant to allow my son to participate in such a dangerous activity.
Posted by Victor at Monday, February 16, 2009

Hi victor, have u heard from them? May i suggest referring them to medical social workers for their medical/ nursing needs, and to any family service centres for other social needs. these people can perform evaluation, confirm their eligibility for financial help, assess their requirements and arrange to get more help for them.

STST, I sent Azri an email on 16 Feb 09 but have not received a reply from him. This could either be good news or bad. I hope it is good news, i.e. he and his family have had enough support and do not need any more additional funds.

If readers have any news of Azri, I would be glad to hear from them.

Hi! Victor,
I happened to read your blog-mention of the cable-ski accident at East Coast Lagoon in 2007 March.
I can't recall how the accident took place, resulting in an injury to the head.

Anyway, what I wanted to say was that last Sunday (just two days ago) I was there at the lagoon with one of my grandchildren to watch the cable-ski participants do their stuff. All the participants wore protective head-gear and life-vests.

Every now and then, one of them would fall into the water. In attempting to swim to the bank, he/she had to wait for a clear passage between the cable-skiiers whizzing by.
What struck me (no pun intended) was that several of these "swimmers" used head-gear that were not brightly-coloured.
There is a reason why life-vests are orange/yellow coloured.

To improve safety, head-gear should similarly be brightly orange-yellow for greater visibility. Along with that, the ski boards that are used should be brightly-coloured orange/yellow too as the "swimmers" push their ski-boards in front of them when they "swim".

Hi Wee Kiat, thanks for your comment. Yes, I think that operator requires cable-skiers to wear protective headgear and lifevests. But even so, people may still get hurt if they are not careful.

If the headgear is brightly-coloured, it would certainly help cable-skiers avoid hitting people who fell into the water. However, the unoccupied grab bars being towed by the cable may still hit the unwary people in the water.

I wrote an email to the school principal to ask about Azri and received the following good news from the principal:

"Thank you for your concern for Azri. Since Jan this year, Azri has
resumed school and is presently coping fine. School has made adjustment to the curriculum to meet his learning needs.

I will convey your concerns and well wishes to him and alert him to your posting on the blog."

Evening Senior Victorian,
Was surfing the web for pics of Tyrwhitt Campus, as it was before and came across your blog...
and after clicking here and there, came to this blog...
myself am totally ignorant of the incident to our fellow Victorian Azri.. however, i do salute you for your Victorian spirit of always wanting to help...
anyway fyi, am at VS from 75 to 78...
and i guess, you should know Abang Ivan Loo Teck Thiam, who's from your cohort...
take care Bang,
stay blessed and blissed...

Hi Zan, sorry that I don't remember Ivan Loo. I don't think he was from the same class as me.

Nice post. You can never really tell where your curiosity can bring you. It is sad to hear that the kid ended up hurting himself in the sport but it's good that he's back at school now. It's also nice that the school is reconsidering about changing their sports curriculum for students. At least we know that they are listening.