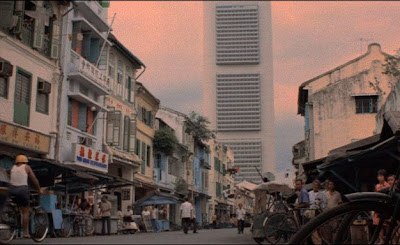 This photo is a video grab of a scene from Saint Jack, a 1979 film that tells the life of Jack Flowers who was a pimp in Singapore. The film was shot entirely on location in various places in Singapore in 1978. This controversial film was banned in Singapore. The ban was lifted only in Mar 2006 and the film is now M18-rated.

However, the quiz is not about the film. That would have been too easy, wouldn't it? It is also not about the name of the skyscraper in the background. Any true blue Singaporean would instantly recognise it as the 52-floor/201-metre OCBC Centre which was built in 1976. It means that the building was only 2-year old in the photo. At that time, it was the tallest building in Singapore as well as in South East Asia.

Instead, I would like to know the answers to the following questions:

2. Is this portion of the road still in existence today?

3. Who was the OCBC chairman at that time?

4. What was the tagline of the bank?

If there are no correct answers, please check out this post again in a week's time.
Posted by Victor at Thursday, February 12, 2009

I guess I can only find the answer the old-fashioned way. Do you think my chance of a second shot is slim? Haha.

I wonder about the 1976 Singapore skyline. Look at your photo - OCBC Centre sticks out like a sore thumb. Isn't this funny, even scary?

icemoon, the tall building in the background looks big, strong and friendly. how can it seem scary?

ok, let me try and asnwer the 4 questions.

Hope yg is right, if I go Upper Nankin Street cannot find the second shot angle will be very disappointed one. Maybe go there when I go China Square.

yg, 'big, strong, friendly' sounds familiar to me but somehow i link it to The Chartered Bank.

Anyway I don't know any of the answers.

I chanced upon your blog yesterday while trying to google some old places in singapore.

Maybe you can help me and my colleague in our lil project.

Can you identify these 2 buildings in the pictures. They are supposedly in the west area.

Also, where in singapore is this place found: Golden Palace Holiday Resort, Singapore, around the 1970s.

Would really appreciate it if anyone knows. I have a feeling the golden palace in somewhere near the marina as i can see a flyover in one of the background pictures.

Hope to hear from you soon =)

where are my manners!

Hi Nadya, my friend Peter said that the Golden Palace Holiday Resort was located in an old road called Jalan Ang Sian Kong which no longer exists today. This road was off a part of Tampines Road which had also been expunged. Today, the site is part of Pasir Ris New Town near the MRT station and White Sands Shopping Centre.

As for the other 2 old photos in your blog, Peter thought that the one with motorcycle could be Bukit Timah 7 ms (milestone) hawker centre taken from the carpark while the other one might be the Tentera Diraja Mosque on Clementi Road, opposite NUS Faculty of Engineering.

However, Peter was not very sure about his answers for the 2 old photos. As for me, so sorry that I don't have the faintest idea where the photos were taken.

Thank you once again to you and your friend for the information.

My colleague and i, truly appreciate the help.

And before i forget, great blog!

Hi Victor! I am very interested to know where this scene was shot. Do you have the answer? I tried to check your blog but seems like there's no mention of the answer as promised. Haha.