Does This Rock Look Familiar? 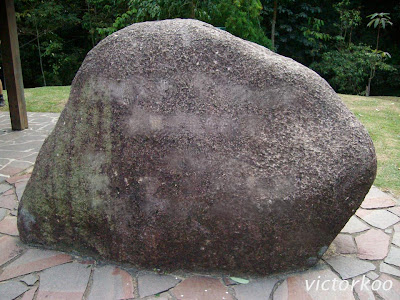 This quiz should be an easy one for YG. At different times, he came across to me as an entomologist (insect expert), an ornithologist (bird expert) or a botanist (plant expert). I believe YG's former profession as a teacher has something to do with his wide knowledge of diversified topics, except perhaps only in investment. :p Obviously, YG made a very good teacher.

So far, YG has never shown himself to be a petrologist. That is a rock expert, not of the music kind, according to this Wikipedia link. (Hmm... I wonder what do they call someone who studies petrol?) However, as YG seems to have been all over our little island of late, he must have seen this rock before. So YG, what's your answer?

As for me, I am no rock expert myself. I only know how to talk rocks. :p

YG, Chun See and Icemoon obviously knew the answer to the quiz right away but they didn't want to spoil the game for the rest. Yes, the answer is Bukit Timah Summit.

The climb to the summit is about half an hour to one hour, depending on how fast you climb. If you do it slowly, the walk can be quite romantic. 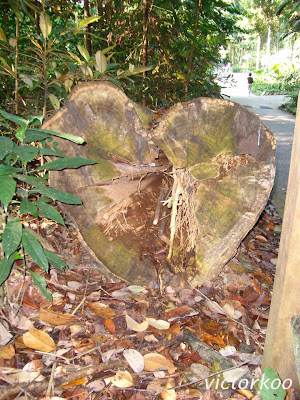 A tree trunk with a heart-shaped cross section. Ain't it lovely? 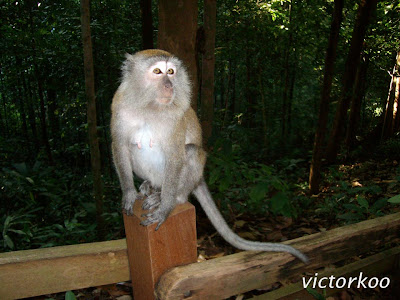 Take your time to see nature at its best. You can admire the long-tailed macaques but don't feed them. Your act may hurt your pocket more than their hunger may hurt them. ;) But more importantly, feeding the macaques will alter their feeding habits and make them associate human beings with food. They become reliant on us for food and may even turn aggressive if they don't get what they want. In fact, I witnessed a macaque snatching a plastic bag containing a water bottle from an unwary woman. It was quite scary. 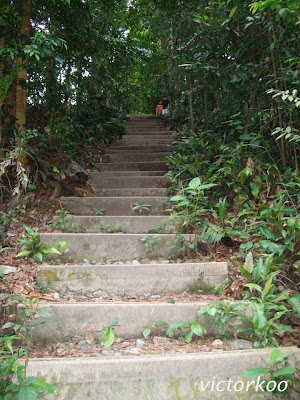 The last part of the climb is a flight of stairs. This is a shortcut. If you take the road, the climb is less steep but it is further, naturally (pun intended).

After an arduous climb (for people of my age), I finally reached the summit. 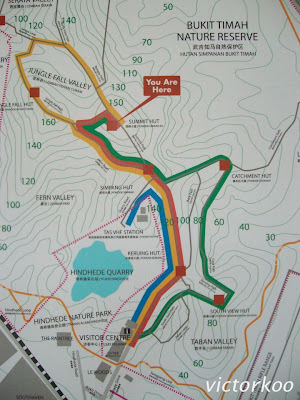 If you are lucky, you might even see some unusual sights. On the day I was there, Mediacorp was filming on location. 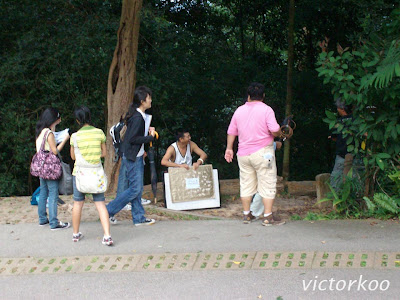 The man in pink shirt was Director Michael Woo.

Come on. If Michael Woo I can make it to the summit, surely you can too. Make an attempt, if you haven't. I'm sure you will not regret it. 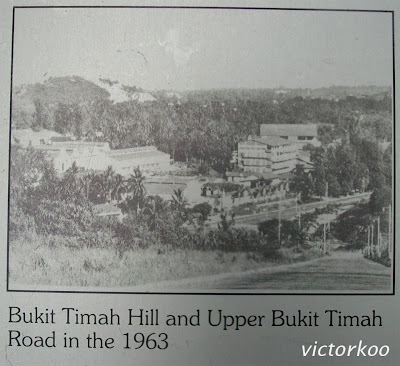 At the Bukit Timah Summit, there is a sign that reads:

"You have reached the top of Singapore's highest natural point at 163.8 metres. The first men to reach the summit was Singapore's Resident Councillor John Prince and his contractors in June 1827.

It took them five hours to cover a distance of 22.5 kilometres of plantations, hills and swamps from the south. A white flag was hoisted up the tallest tree, which could be seen from as far as Fort Canning Hill. The access road to the summit was built in 1843.

Believe it or not! Once upon a time .... where the tigers roamed. 'Bukit Timah was known to be horrid tiger-infested, forested blob to the early Colonials where tiger roars can be heard at twilight.' - A View From The Summit"

The inscription on the plaque near the Visitor Centre reads as follows:

"Bukit Timah, which dominates the arterial Bukit Timah and Dunearn Roads leading to the city, was a strategically important point for both the Allied troops and the Japanese.

On the night of 10th February 1942, the Japanese troops from the 5th and 18th Divisions, supported by armour, attacked troops of the 12th and 15th Indian Brigades, the 22nd Australian Brigade, The Special Reserve Battalion, Tomforce, Merrett's Force, the Argylls, Jind State Infantry and 'X' Battalion. The Allied forces had re-grouped to defend the critical junctions at Choa Chu Kang, Jurong and Clementi Roads leading to Bukit Timah Road.

By dawn of 11th February 1942, the Japanese troops reported to their commander Lieutenant General Tomoyuki Yamashita that they had seized Bukit Timah. The road to the city was open."

victor, i think you are trying to make a mountain out of a molehill as regards my expertise; i was an ordinary teacher, all the 'ist' comes from surfing the internet.
i have seen this rock but not in this state, not with all the 'etchings' removed.

Ha! I think I know the answer to this one. Near my house right? I shall be a sport and not let the rock out of the bag. But I suspect many of your readers will recognise it becos it makes a good photo shoot subject.

I was thinking about the etching until I realized it could be Victor's doing.

i have been waiting for someone else to provide the answer. all you have to do is type 'bukit timah summit' to see pictures of the same rock, with the markings intact.

Honesty is a virtue. I admit not knowing the answer. In fact my guess was Bukit Batok, maybe at Little Guilin. Opps!

I'm interesting in the old photo. What are the buildings and hill in the background? Maybe Peter who was there in 1960s can fill us in.

Oh Icemoon, you actually didn't know? You had me there, haha.

About that old photo, I don't know if it was taken from the top of Bt Timah Hill or was the hill in the background Bt Timah Hill itself. Maybe Peter or YG can throw some light? Any knowledge about the buildings?

The 1st and only time I went up Bt Timah Hill was 01/01/03. Maybe it's time to go again and do a 2nd Shot with this stone and see how my my children have grown. On second thots that may not be a good idea as I would have to see how much I have grown :(

victor & icemoon, i am sorry i cannot throw any light on the old photo of bt timah & upper bukit timah rd. i went to the car park at hindhede rd and to rifle range rd but could not figure out where the shot had been taken.

chun see, avoid going there on weekends as there is always a problem finding a parking space. weekdays are also quite crowded, very different from the situation in 2003.

the "newspaper" photo was taken from Bukit Batok; you see the road that leads up to Bukit Batok there. Running across the photo is Upper Bukit Timah Road. In the top portion of photo is Bukit Timah, with the exposed slope which is still there today.

I just met my classmate, Jesu, whom I had not seen for 38 years. He was the Indian lad who lived at the foot of Bukit Batok I mentioned in one of the blog articles who reared goats as a "side income". He tells me that after the multi-storey bdlg and next to Hindhede Road was a former WW2 Japanese barracks called Yuasa Barracks. I think I did see them but forgotten what was it used for. Thanks Jesu for the information!

There was a massacre of Scottish soldiers from the 2 Bn Argylls & Sutherland which put up road blocks from Bukit Panjang Village to Ford Motor factory. The massacre site is now Dairy Farm Condo.

The road blocks were at the junction of present-day Gombak Drive/Upper Bukit Timah Road (near former Nanayng Shoe factory) and the Hndu temple between the railway bridge at Fuyong Estate and Ford Motor fatcory.

The Japanese swept through the space between Upper Bukit Timah Road and the water pipe-line and entered St Joseph Church to look for British soldiers.

Sori not Hindu temple but a kramat.

Chun See - Believe it or not, this was also my first visit to the summit.

YG - Thanks. Peter has filled us in with a lot of information.

Peter - Wah, you really have a photographic elephant memory. Thanks for the very interesting detailed inputs.