A Crooked Product Or A Crooked System? 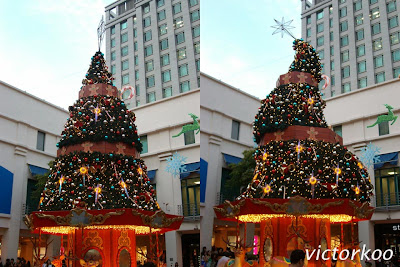 There was an article about the debacle in the Sunday Times of 7 Dec 2008 titled "Structured Products, Anyone?". It appears that many people have lost confidence in such products, if not in the banks that marketed them. I for one have lost all trust and confidence in my banks and relationship managers (RM) to invest my money for me. DBS recently retrenched 450 employees in Singapore but it claimed that the retrenchment had nothing to do with the High Notes debacle. I personally don't believe that claim. A relationship between and a bank and its customers is based very much on trust. If you lose that, you have lost everything, not just people's money. And it is going to take a long, long time to build up that trust again.

It turned out that banks in Singapore started marketing such high-risk products to retail investors (aka ordinary folks like me) from as early as 1999. How they managed to do so for so long is a wonder. It was a disaster waiting to happen.

Many other questions remained unanswered:

1. How many similar products were sold?

2. What is the total sum of money involved?

3. How many people have bought such products?

4. How many of these products are still in-force, i.e. have yet to reach maturity date?

5. What are the current values of these products?

I am a risk-averse investor myself. When you are barely 2 years away from collecting your CPF money, you should not be taking high risks. Moreover, I have been burnt badly before in 2001 when the technology bubble burst so I know how it feels like to lose your hard-earned money.

In June this year, I visited a well-known foreign bank in Singapore together with a good friend. I was there to look at their investment products. I told the RM that I was a risk-averse investor because of my previous bad experience investing in technology unit trusts. She showed me pamphlets of 3 products - the first was an agricultural commodity fund, the second was a structured product called JPMorgan AsiaConfidence Notes while the third was something called a "retail note" which I believe is also a structured product.

The expected return for the first product was not stated in the brochure. At that time, prices of commodities like wheat and rice were already quite high. So was the price of crude oil, at above US$120 a barrel. I thought the high prices were unsustainable, so I decided against this product. As for the second product, it paid an attractive coupon of 7.5% p.a. The principal was safe unless any of the 4 indices fell below 50% of the initial levels of the indices. (I do not know if any of them has already reached this so-called "unlikely" scenario by now.) I thought that the second product was too complicated and also likely to be of higher risk because of the high coupon payout. In the end, I invested a 5-figure sum in the third product which paid what I considered as a very modest 3.3% p.a. fixed coupon payout on a 5-year investment. The RM also reassured me that the third product was very safe. After all, she asked, "What is the probability of a country going bankrupt? Practically zero, right?" 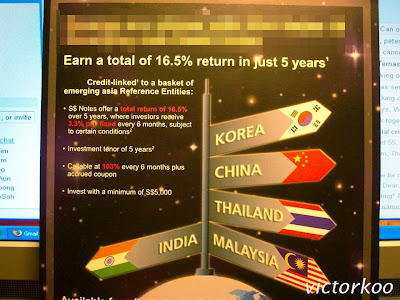 Well, after what had happened in the global financial markets in recent months, I am not so sure if I could agree with her now. In any case, I now know that with structured products, you could lose your entire investment even if the reference entities did not fail. This was the case with the Lehman Brothers Minibonds and other such products. It looks like I have also been misled into investing in a vulnerable product. The irony is that in the eyes of the financial regulator, I am not considered as a vulnerable investor. I understand that the unofficial (or should it be official?) definition of a "vulnerable investor" is "someone who is above 62-year-old and has no more than primary education", arbitrary though the definition may seem.

After I had indicated my interest in the product, the RM quickly filled in a survey form for me, saying that it was an MAS requirement. I remember that I specifically told her that I was not willing to take any risk at all. It took less than half an hour to close the deal. Such easy money (for the RM and the bank)! I did not receive a copy of the prospectus nor the survey form that I signed. It didn't occur to me to ask for them. Now I know that I should have. All I received was a brochure with a lot of fine print: 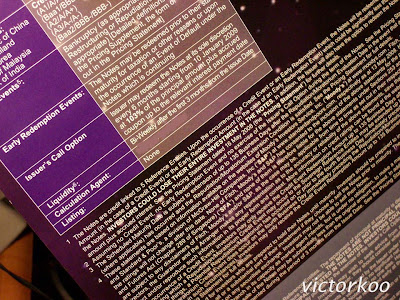 A few weeks later I received my bank statement and was very surprised to see the product that I bought being classified under "non-capital protected investments". I quickly looked for the brochure and scanned the small print. And I found this statement:

I got to be crazy to risk my entire principle for just a miserly 3.3% p.a. yearly return. You bet I will never trust a bank or an RM ever again. The next 4-1/2 years is going to be a very long and nervous wait for me. Meanwhile, nobody could say how likely my note-issuer might collapse like the Lehman Brothers or how much money I would get back in the end, if at all. To make matters worse, there are people who would say that I am greedy or I "went in with my eyes open". For some people, the situation is so bad that they are even contemplating suicide. Don't worry, I am not thinking of that yet.
Posted by Victor at Monday, December 15, 2008

How come the christmas tree is crooked?

Dear GNE, oh you no longer receive email notification of my new posts? Ya, I think I meddled with the settings recently. I am sorry that I may have inadvertently removed the notification. I'll go and see what I did wrong and rectify the situation.

BTW, I thought with the current feed technology, anyone could "watch a blog" for new posts? (Pl see my left sidebar for some blogs with latest posts. But somehow I can't seem to be able add your blog there.

Icemoon, alright I confess that I emailed Mr Tan K L about my blog post. Wah, my blog hits jumped at least 5-fold after that. If only my bank investments did as well. ;)

Ah the crooked Christmas tree - it is just like a structured product - when you first look at it, it is straight. But when you look again a while later, it is crooked. Haha. That's why I chose it as the picture for this post.

Just in case you are thinking that I photoshopped the photo; no, I didn't. Go down to Bugis Junction and you will see how the X'mas tree turns (literally) crooked right before your eyes.

Wa, a spike in readership. Quick, put some structured product advertisement in your blog! This is the sure risk-free way to earn money .. lol

Nice write up. I too have lost confidence in all banks, specifically at the competence of their employees.

Won't be investing in anything less than 1000% returns in the future -- starting a business.

victor seems bent on going after crooked things lately. first, it was crooked car and a crooked driver. now, it is crooked product and a crooked system. a crooked tool can still be of use, you know.

yg, the choice of words not a coincidence right? :P

I know Victor is a sharp and intelligent person. If even he can become 'vulnerable', we can safely say that many Sporeans are more 'vulnerable' including me.

I am sorry to learn of your sad predicament.

Long long ago when i first started working, i was "misled" by an insurance agent, who then failed to remit my premium to the company for several years. Trusting innocent lamb that i was.

Thereafter, i bought no insurance whatsoever unless and until they could produce a copy of the actual contract which i then proceed to vet with a fine tooth comb to confirm what the agents tell me verbally.

Same principle applied similarly to any investment products touted (yes, touted) by "investment advisers" who when grilled closely by me inevitably crumble. I have found that most of them dont even know their own product well. Those who cant answer and said would revert to me, well 100% thus far have never called me back.

And being called "kiasu" "kiasi" "so ngiau" "pah pai" [all reported back to me by the introducers] never bothered me in the least.

How can i trust someone who doesnt even really know what he is talking about and just reels off the marketing spiel? Cannot even answer one non-standard question.

I am astounded at the amount of trust ppl put in their bankers / insurance agents. Probably i deal a lot with the former and familiarity really breeds contempt.

Yesterday, insurance agents were not to be trusted. Today your private banker (a.k.a relationship manager depending how much the bank evaluates your financial standing). Tomorrow can be anybody. This financial crisis will certainly expose many more and old paradigms have to be cast out.

There is a golden rule which many people do not follow, including me. It is hard to believe that people will help you "double your money" or lead you to believe that there are "sure thing" about bigger rewards in after-life.