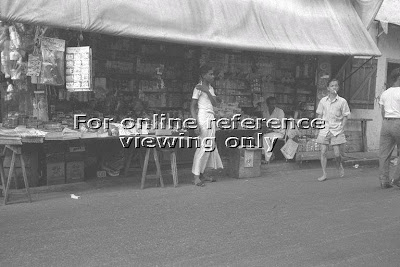 A 1962 Mama Shop - Photo Courtesy of the National Archives of Singapore
The Mama Shop story continues with items that the mama shop sold half a century ago which you could still get today. Believe it or not, some of the items are still sold under the same brand names!

1. Hacks sweets. (Known as "cough drops" then). There were 2 flavours - the regular type (those in the left bottle in the photo below) and the lemon type (you can see them partially in the third bottle on the right). Five cents could buy you 2 sweets - you could choose to have one of each flavour. As you can see, my neighbourhood provision shop is now selling 5 of them for 20 cents - not a very hefty price increase after more than 40 years, I must say. 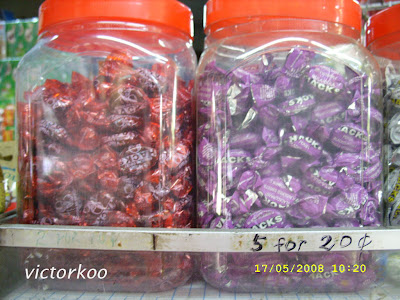 Hudsons cough drops were also available then at the same price. These mostly came in red wrappers and were strawberry-flavoured. Hacks and Hudsons were a bit too minty for my liking. Of course, there were also other mint sweets - those that looked like a miniature block of ice in shape and form. I also fondly remember the oval-shaped milky-mint sweets that were beige in colour. They came in transparent plastic wrappers and were one of my favourite sweets.

2. Pon-Pon cuttlefish. (Now you could only get Ken-Ken cuttlefish. However, the wrapping still looks similar to Pon-Pon.) The smallest packet cost only 5 cents. Bigger packets costing 10 cents and 20 cents each were also available. The recent Ken-Ken packet you see in the photos below costs me $1.20. However, the amount of cuttlefish inside is even less than to what I got in the 20-cent Pon-Pon packet in the 1960s. Inflation certainly makes the balloon bigger but the cuttlefish packet smaller. Haha. 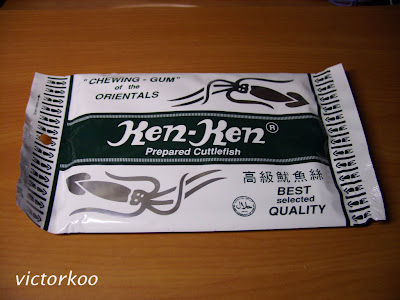 Notice that the 1960s tagline "chewing gum of the orient(als)" is still in use today. 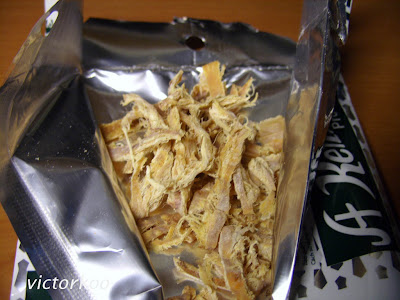 3. Prawn crackers. The small packets were priced at 15 cents each, if I remember correctly. We loved to eat this snack because it was very tasty. Of course, there was a lot of aji-no-moto (mono-sodium glutamate or MSG) in it and we felt very thirsty after polishing up a whole packet.

4. Treets chocolates. These were round and had nut centres. They came in plastic packets of about 10 chocolates each. The tagline was "melts in your mouth and not in your hands". Hmm... it's similar to that of today's M&M chocolates. Anyone knows whether they are products of the same company?

5. Bic ballpoint pens. Can't remember how much the mama charged for these pens which are still sold today. I recently bought 3 for $1 but not from a mama shop. Bic comes in 4 ink colours - blue, black, red and green. The old Bic had a nib that was made of brass. It was attached to a translucent ink tube hidden in the pen casing. We liked to pull it out every now and then to check how must ink was left. Some years later, the nib was replaced with brass-coloured plastic and now it is in same colour as the pen's ink colour, as you can see in the photo. The rest of the pen looks very similar to the 1960s version though. "Writes to the very last drop" was Bic's tagline, as if ink was so precious then. 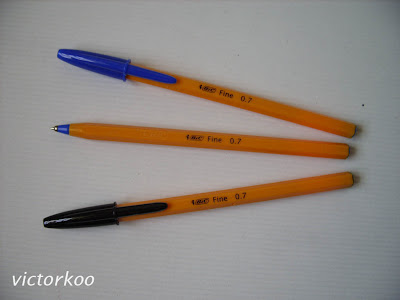 6. Paper balls. These were sold at 2 pieces for 5 cents. They are still being sold at some toy shops today but I don't know what is the current price for one ball. You blow through a tiny hole to inflate it and then kick it around or hit it with your hands. When it looks deflated, you simply blow it up again. When you are tired of playing with it, you deflate it and then wear it on your head like a hat, acting like a traditional Chinese kid. 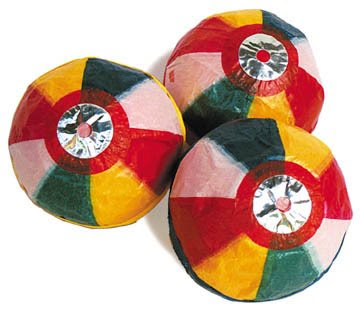 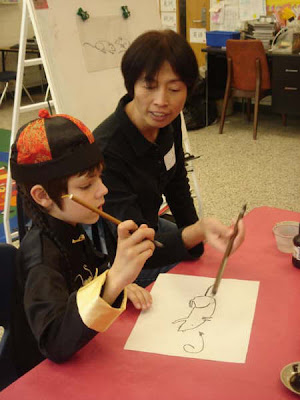 Effectively, you have two different toys for the price of one! Not bad at all, eh?

7. Blowing balloons. These were favourite toys of many fun-loving children in the 1960s and they are still available today, both the balloons and the children. (Laokokok blogged
about it before here so I needn't say more.) 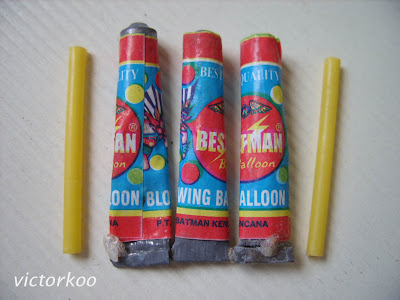 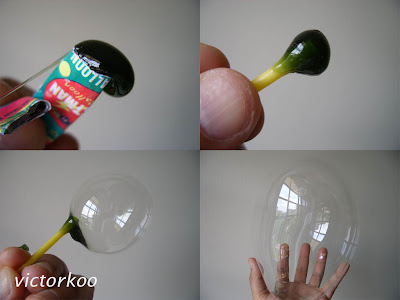 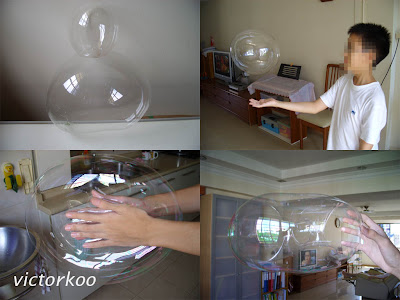 8. Cigarettes in cans of 50's. At today's cigarette prices, a 50-stick can will cost more than $20 each. No wonder they disappeared altogether - no one could afford them! Haha. Actually, the mama shop sold them by the stick. Maybe it was 5 cents for a stick or two. At those prices, you could afford to be a chain smoker. It certainly won't burn a hole in your pocket. Don't know about your lungs though. :p 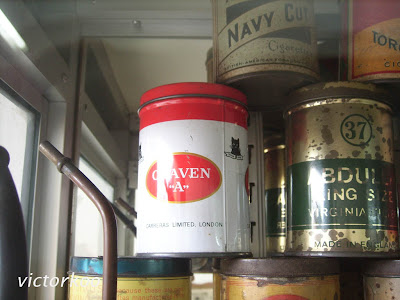 9. Finally, there was one item which I couldn't identify when I was a kid. It looked to me like chocolate gold coins. 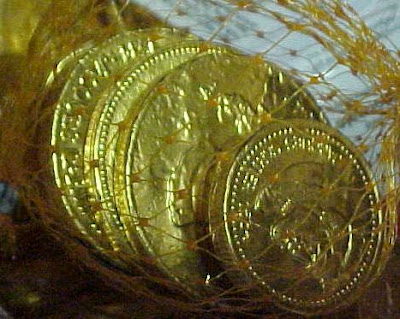 They were placed in a transparent glass container just like the Hacks sweets were. When I was about 10-year-old, I couldn't hold my curiosity any longer. So I asked my elder brother (who is 7 years older than me) what they were. His Confucius-like answer was, "You will know when you grow up."

Well, I have more than grown up now and indeed I know the answer. They are gold-coin condoms. 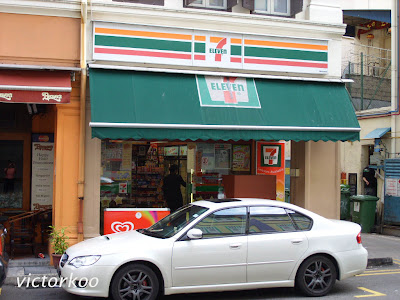 Some mama shops have transformed into what I would call "oiki" shops. You may be wondering, "What is an oiki shop?" Well, here is the answer: 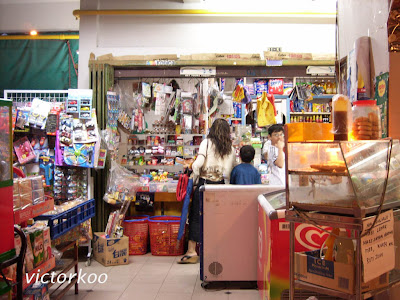 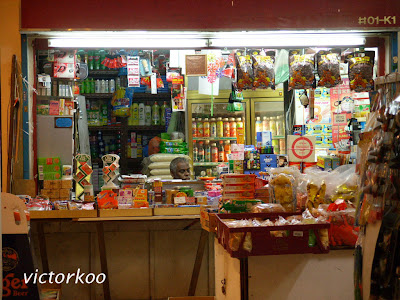 It is a convenience store set up in the void deck of an HDB block. Because it is located on the ground floor, it is on the 1st storey (or #01). It is called a kiosk (shortened to K). Since there is usually at most 1 kiosk at any HDB block, it follows that they always have the address "01K1". Hence "oiki". QED, not "quite easily done" but quod erat demonstrandum or Latin for "that which was to be demonstrated. ;) 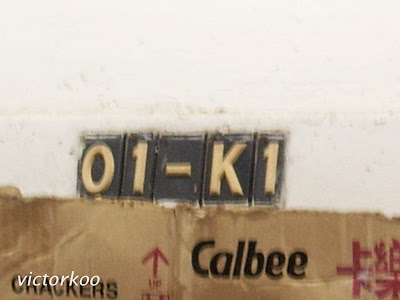 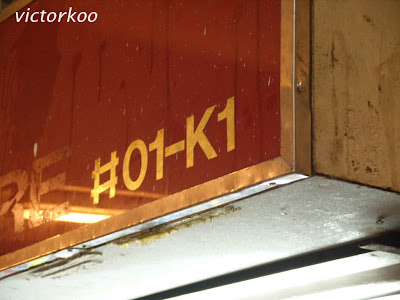 But don't be surprised if you find that your oiki shop is not manned by a mama. Nowadays, it is common to find oiki shops being manned by Chinese as well. What will become of the oiki shop in 50 years' time? I wish I know.
Posted by Victor at Monday, June 16, 2008

Chun See - Which photos are you referring to? Those that have my name as watermark are taken by me while those without the watermark are... you know lah.

Did you had packets of "satay" in those days? Remembered they were packed in 10s or so, over a plastic sheet, and tied with a rubber-band for sealing. And the satay sticks had 2 (or 3) pieces of dried meat, with sesame seeds. Tasted a little fishy.

Alex, I know what you are describing. Those "satay" sticks came later in the 1970s, I think. That's when you were a kid.

If you are interested, kindly mail back for confirmation(jules@bestrank.com).Please include your blog's URL.
Looking forward to doing business with you.

Jules - Thanks for your kind offer. I've decided not to take up the offer at this point in time because I am too busy with other things. Perhaps later... who knows?

Hi Victor! I don't know if this'll reach you. If so, I hope you and yours are well. I wanted to say Thank You for placing this on the internet. I was able to find a few things I was trying to remember, thanks to your kind contribution. -- J.

You’re welcome, J. Thank you for your comment. Yes, I am alive and kicking.