I have blogged about the mama shop before.

When I visited the Singapore Philatelic Museum last year, I was pleasantly surprised to find a mock-up of a mama shop: 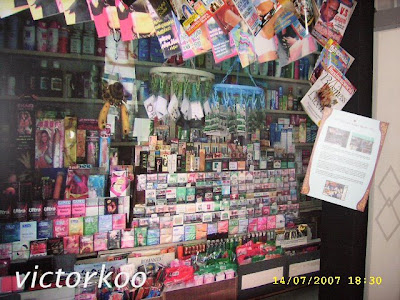 The explanatory notes accompanying the exhibit was as follows:

Such stalls were commonly found in Little India, the enclave of the Indian community in Singapore. Operating in very small and tight space, it is amazing that these stalls could sell a wide range of products - cigarettes, sweets and tidbits, fruits, toiletries, drinks, films, batteries, medicines, and lottery tickets. These stalls were indeed the convenient stall of early days.

With barely a metre depth of shop space, the stalls were usually stashed away at street corners along the five-foot-ways or along side alleys. It is however hard to miss the stalls because the display of colourful magazines and newspaper, strung across the stall with strings and cloth pegs, are very eye-catching. This display method has also become the trademark of the mama shops.

Urban redevelopment, introduction of modern convenient stalls and escalating rental fee are some of the causes that lead to the vanishing of mama shops in Little India. Today, very few mama shops are still in operation.

To pre-empt my philatelist friend Wee Kiat who never fails to point out relevant stamps, there was even a Singapore stamp issued in 2006 which featured the mama shop: 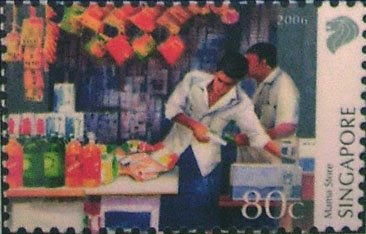 It was one of ten stamps issued in the "vanishing trade" series.

Today, there are probably less than 10 mama shops still running their trade in Singapore. I managed to hunt one down yesterday with my camera: 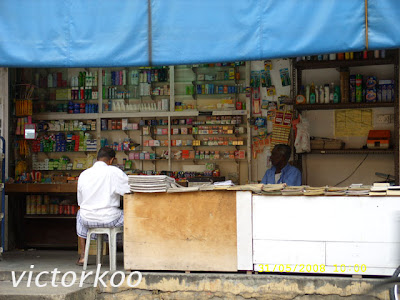 Can you guess where this mama shop is located?
Posted by Victor at Monday, June 02, 2008

Think in Cantonese we called them "Kek Ling Kuai Poh" (a direct translation - Kling Ghost Shop). Used to find such Mama store everywhere in the 60s or early 70s but now getting lesser and lesser.

I know there's one at Geylang...

Victor - the photo was shot at Tyrwitt Road near Lavender Street?

LKK - Yes, I remember seeing a mama shop in one of the lorongs in Geylang recently but I can't remember which one. I circled the area many times but failed to find it. So no choice got to settle for the alternative shop lor. Can you remember which lorong the mama shop is in?

Peter - Close but not quite.

At one of the short roads joining Jalan Besar and Tyrwhitt Road.

I think the one at Geylang is at the lane linking Lor 18 and Lor 20 in the middle.

When I looked at the title, I nearly thought its the OTHER mama shop - www.ourmamastore.com

Hamilton Road, opposite a church and the former Jalan Besar Stadium (now a swimming pool)?

Frannxis - Wrong. Oh, you mean there's one right in the middle of the redlight district? No wonder, I seldom go there. :p

Peter - You are getting further away.

Answer will be revealed this weekend.

Are you sure there are less than 10 in Spore? I see them everywhere man. Example, Serangoon Gardens, Serangoon Road, Ghim Moh Market, Jalan Besar.

I think this one near sungei Rd where you nearly got bashed up.

Chun See - My estimation is based on my gut feelings only. Like you, I don't do in-depth research when I blog, hee.

Peter - Huh? No lah, results will be announced this weekend. Must give other readers a chance to guess mah.

Chun See - I met the aggressive boxer-wannabe in Mohamad Ali Lane lah, not Sungei Road. Just because both locations have old stuff on sale doesn't mean they are the same. :p

I just recalled another mama shop. It's at the Super Bowl Complex along Yung Ho Road, in Jurong. Just next to the McDonalds. I dare say there are at least 100 such shops in Spore.

Dear readers, the answer to the quiz question is Kampong Kapor Road, along the stretch between Desker Road and Rowell Road.

Victor,
U forgot one hot item mama shop usually stock? Condoms. Those days not many places carry that product unlike in 7-eleven shops today.

Peter, I didn't forget. I intend to mention the unmentionable in one of the subsequent posts of this series.