Chun See's mention of this phrase 回头已是百年, literally meaning "when you look back, you are already 100", in this blog entry is indeed timely.

You see, I just came back from the 100th birthday celebration of my paternal aunt. The celebration was held at a posh Chinese restaurant on the 33rd floor of OCBC Centre. Below is the beautiful night scenery of the city as viewed from the restaurant. It is certainly no mean feat that Singapore managed to achieve this level of development in just over 40 years. 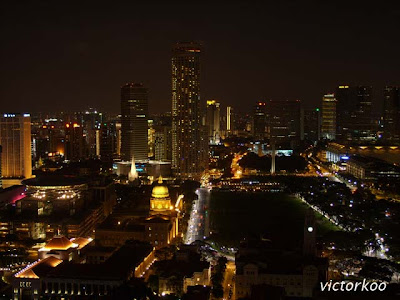 This bit of information is especially dedicated to my friend Walter - yes, there was sharksfin on the menu and there was no MC Hammer(head) to give my bowl of sharksfin to. So I not only touched the sharksfin but I ate it. Shucks, now I am wrecked with guilt. 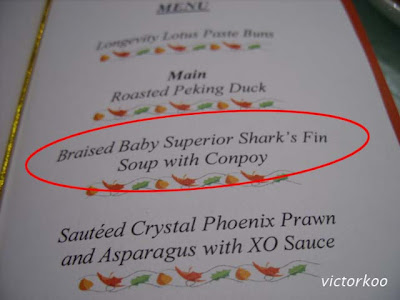 I remember more than 40 years ago, my aunt was a peddlar selling cloth in a Chinatown backlane. My mum brought me to her stall one morning. Her colourful wares, wrapped tidily around paper rolls (for 5-foot-wide cloth) and flat wooden frames (for 3-foot-wide cloth), were placed neatly on a groundsheet on the floor. She had no dearth of customers. Aunties would drop by her stall to buy a few yards of cloth to make their own clothes like many families do in those days. When the day is over, she would load all her cloth on a rickety cart and then push it to a nearby place where she would store them for the night.

She was married to my 7th uncle who passed away a few years ago at the age of more than 90. In comparison, my father who ranked 8th in the family died in 1993 at 82 while my mum joined him 10 years later at 83. Even then, I consider my parents to have lived fairly long lives. Yet, if the government's proposed annuity payout from age 85 onwards should go through, even my parents would not have lived long enough to benefit from it.

Let's face it. How many of us can expect to live till the grand old age of 100? 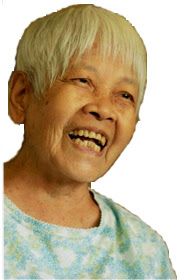 Centenarians like the "110-year young" Teresa Hsu and my aunt are more the exception rather than the norm. Singaporeans born between 1995-2000 can expect to live till only 77 years' old. Okay, it might have gone up to 80 by now but that is still a long way off 100.

MM Lee, who is turning 85 this year, recently revealed his secret for a long life - stay mentally and physically active as one ages. I would like to add some rather obvious points which MM Lee himself has made at one time or another, i.e. have a healthy lifestyle - eat carefully, exercise regularly and sleep properly.

I don't mind living to 100. But besides having a long life, the importance of having a good quality of life cannot be overstated. It is no use being alive but spending your days bedridden or immobile.

There is a certain beauty about her and if I can live to be a 100 and still have that smile on my face, why not? If only I can look half as good at that age and I think this is proof that inner beauty does shine thru eventually :D

I won't want to live to a 100 if it's suffering with pain, and sickness.

Kopi Soh - The woman in the photo is Teresa Hsu and not my aunt. She is also known as "Mother Teresa" of Singapore because of the charity work that she is involved in. She is truly one remarkable lady.

Tigerfish - Yes, quality of life is very important too.

Yes, and these two ladies are healthier than some younger people.

But we can't decide how long we want to live and most people still want to live even when they are very sick and bedridden despite what they say otherwise when they were young and healthy.

One factor is the family history. If everyone in your family lives up to 90, then most likely you will too.

According to a 'live expectancy' test I tried, I could live up to 80+, hahaha..

my ah ma is also 85 this year, but she has forgotten many things already.. when u live for 85 years, nothing much for u to remember anyway i guess.

I wouldnt wan to live to 85 i think? but I wan to live till after all my close ones has gone - for I do not want them to be upset if I go before them.

Have you heard what an old lady might say when she outlives her children?

Frannxis - What you said is so true. Most people want to live as long as they could because of the survival instinct of the human race. Hmm... now I know you are not 80+ yet. :p

GNE - You want to outlive all your loved ones? Sure or not? That's quite unconventional thinking, I must say. The experience of a loved one's departure can be quite traumatic. Moreover, one would need to have an extra-long life to be able outlive one's descendants.

Recently, there has been a bit of news about old people in Spore who died alone without neighbours knowing even. I think that is very sad indeed. On the other hand, I'd hate to spend my final days like Indonesia's ex-president Suharto. Being forcible kept alive by all sorts of machines, and the whole world seeing my miserable condition.

"The Last Mile" or the very last chapter just before we leave this world can be a very depressing one for both sufferer and NOK.

As a sufferer, there is pain and the disability to enjoy the finer things in life - lifestyle, joy and money. Even if one is alive during this period, the fact is you cannot partake all those things that a normal healthy person does.

Sometimes the suffer feels reluctant to depart because there is so much unfufilment; many things that might not have been achieved whilst living OR sadness because hopes and expectations have been dashed.

So the question should also included not whether one wants to live to 100 but whether one can one take the challenge of "The Last Mile".

Victor, can u email me on what you just wrote about the Cantonese proverb of white hair sending off black hair?

I remember my doctor's comment when i asked him to slow down his work and research activities a bit (he's in his early 70's) - "At my age, do you think i would be doing this if I didnt enjoy it? I hope I can work till I drop dead". I wouldnt want to sit around waiting to die either.

Chun See - Yes, it is indeed very sad for people to leave this world without any loved ones by their side. As for dying people being forcefully kept alive, I think our Advanced Medical Directive (AMD) system is supposed to take care of that. But I understand that not many people have signed one.

Peter - What you aaid is so true. Sadly we can't usually decide how and when we want to go.

Meow - I guess your doctor's work is his passion. Frankly, what can be better than that? But realistically speaking, not everyone is as lucky.

But then they say, "You can't always do what you love but you can always love what you do."