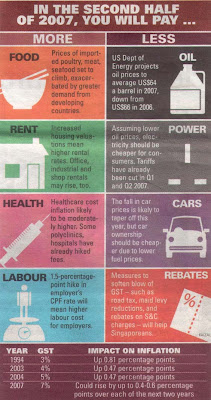 Table in Today 25 Apr 2007 on what to expect for the impending GST increase
Singapore's Goods and Services Tax (GST) will be raised from 5% to 7% on 1st July 2007. From the same day, the Government will hand out a GST Offset Package which is a "set of comprehensive measures to help Singaporeans with the increase in GST, with more for lower-income Singaporeans". For my wife and I, we both get $200 help each. (Thanks for the implied compliment from the Government that we are not that poor but the reality is we are not very rich either.)

A few months ago, Ya Kun Kaya Toast increased the prices of its drinks and toasts by at least 10 cents all round - about 10% increase. 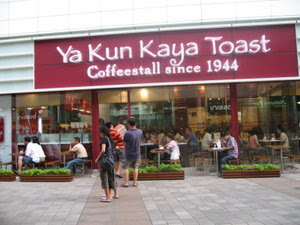 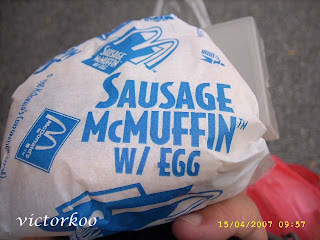 My favourite popiah sold at a stall in a coffeeshop in my neighbourhood now costs $1.20 instead of the usual $1.00 - a 20% increase. 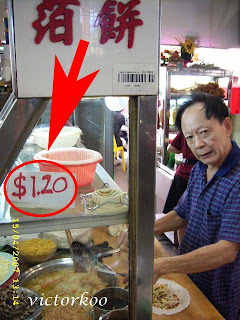 I don't earn very much, you know?
Perhaps most outrageous of all is that a can of Milkmaid condensed milk now costs $1.60 instead of $1.10 - a whopping 45% increase!

Granted, costs of labour, materials and overheads might have gone up but why must prices always be adjusted by at least 10% or more everytime? What I find hard to accept is the Milkmaid supplier's claim that the milk now "has more calcium in it", implying that the price increase is justified. Gee, I don't need more calcium, just give me back my old milk and charge me the same price for it.

I have yet to see a price increase that is limited to just 2%. The above are just 4 random examples which I quoted. There are probably dozens of other products which have their prices increased recently as well. Mind you, the above increases were effected even before the new GST rate kicked in. At this rate, you bet even bitter medicine is going to cost more. So it is better that you take it only once instead of twice (even though that might have been your preference in the first place).

Sorry, I don't mean to be rude but if you are a businessman and are putting up new prices for your products because of the impending GST increase, have you upped yours yet?
Posted by Victor at Saturday, June 02, 2007

Like it or not, the consumers are always at the receiving end, period.

Alex - As civil servants, we're not too badly affected by the GST increase. (*Whisper* - Because got about 3% pay rise mah, hehe.) I really pity the unemployed and the retired. It's going to make life even more difficult for them.

Haha Vic, some unemployed and retired can be very rich.

It is inevitable. I think it depends on raw material and labour cost. Most people will not be too much affected by the increase because as you said they have some increment and big bonuses.

So I feel it also depends on the economy. If the economy is bad, MaDonald, Ya Kun and the Popiah Stall would not dare to raise prices.

Maybe as consumers we need to exercise a bit more discernment. Conciously look for those stalls that do not exploit the GST increment. I believe becos of the competition, there are still many stalls that dare not take chances with indiscriminate increases. But sometimes, consumers have themselves to blame for being too lazy to check prices. I am one of them. But thanks to your post I will be more careful.

I believe that those who try to profiteer from the situation will find themselves at the wrong end of the stick. Ultimately, consumers will have the choice and there are price moderators like NTUC Fairprice in the marketplace to ensure that we get a fair deal. As the saying goes, we can sometimes vote with our own two feet!

There was a guy who shared a table with my friends and I at the Maxwell Food Centre not too long ago. We chatted with him. No, he didn't tell us that he was rich but he said, "In Singapore, if a couple doesn't have $2 million, they shouldn't even think of retiring."

That statement scared me to death (which would be good, 'cos I won't need any money then, haha). How many people in Singapore can achieve that? Maybe only the top 5% of high income earners. For most people, even fulfilling the CPF minimum sum of $120,000 at age 55 poses a big problem.

Chun See - Yes, NTUC Fairprice's housebrand condensed milk is still selling at $1.00. Consumers should band together and send a strong message to the supplier that they are not buying it (no pun intended).

Cool Insider - Yes I agree with you. (See my comment to Chun See above). But sometimes, consumers are also at fault, not because they don't do their homework but because they are brand conscious. They stick to one brand despite the price increase because they think that the brand is of better quality or simply tastes better, which may not be true.

aiyo..(other than the milkmaid lady), you mentioned all my fav food leh - ya kun toast with kopi gaw, sausage mcmuffin with EGG, popiah!!! What I like all cost more now :(

GST increase or not, kopitiam prices remain the same :P

Tigerfish - No problem. Your dollar is much stronger than ours. Some more, you can make much tastier alternatives yourself.

Firehorse - Your kopitiam has been serving free drinks so far, GST or no GST.

Probably due to different schemes, mine was the "fogotten" one. :<

my landlord also want to up my rent! The increase is nearly 20%!!

i am moving.... finally!
which might be a good thing!

Aiks you caught me on dat wan, sigh I kenot get away with anything here :P

Keropok Man - You should count yourself lucky when faced with a 20% rental increase. I heard some tenants were slapped with a more than 50% increase. It's a landlord's market now. Their attitude is "take it or leave it". They think that tenants who are willing to pay the asking price are aplenty now. I just saw a Sunday Times rental classified ad for a 1259 sq ft apt in Sims Ville asking for a ridiculous $3,500 pm rental. Crazy isn't it?

Eh, but why you don't consider buying ah?

Firehorse - We are regulars at your kopitiam and have become friends. How can charge us for drinks? Hehe.

Have a great weekend Victor.

Thank you Firehorse. I wish you the same. :)