Remuneration for My First Few Jobs 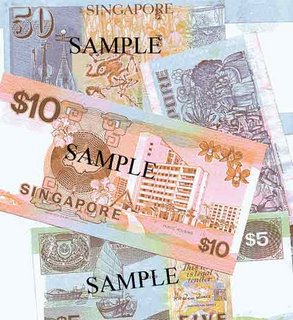 My first two consecutive 'permanent' jobs in the late 1970s was as a clerk in foreign banks Banque Nationale de Paris (BNP) and Bank Negara Indonesia 1946 (BNI 46). The former was then located in Overseas Union House in Collyer Quay while the latter was situated in Malacca Street. [I think the former is now known as BNP Paribas, still located in Collyer Quay but on the opposite side of the road. BNI 46 is now known as PT Bank Negara Indonesia (Persero) Tbk, now situated in Cecil Street. Don't ask me what the words 'Paribas' and 'Persero' mean - they sound like French and Indonesian to me. Meanwhile, my name has remained unchanged for the last 50 years.]

The two banks were where I learnt my first words of French and Indonesian (not 4-letter ones). I didn't go very far with French but I could manage some Indonesian, maybe because it is very similar to our National Language. I also didn't go very far with either bank - I worked only about 3 months in each. You know why when I tell you that BNP was paying me $250. Mind you, that was per month and not per week. And it was in Sing dollars and certainly not French Francs (or Euros now). In addition, it was gross pay, i.e. before the deduction of CPF. After CPF took its monthly painful bite, my take-home pay was a measly $220+. Although the cost of living then was much lower than now, after paying for my lunch and public transport costs, I was lucky if I had any money left over. But it was just as well because the banks expected you to work lots of overtime. So much so that you didn't have much leisure time. So why do you need so much money for? I could almost hear the banks saying. "Why not let us keep the money safely... as our profits?"

One would have thought that banks, which have so much money, would at least pay their staff fairly, if not generously? But no, $250 was the standard starting pay for clerks. That amount was decreed by the Association of Banks then, I think. The purpose was probably to prevent poaching of clerks by one bank from another, I guess. Well to be fair, the banks paid a standard of 3 months' bonus. But could a clerk possibly survive till the end of the year to collect his bonus? Maybe, but it was difficult.

My friend Chris asked me why my money photo for this post had the words 'SAMPLE' on the dollar notes instead of the usual 'SPECIMEN'. I told him that I used 'SAMPLE' deliberately because I consider a $250 pay packet as only a sample of a real pay. Today, that amount couldn't even pay for my monthly petrol bill. So sad and fed up (with progress).

The irony of it all was that we were made to handle transactions that were thousands of times the amount of our monthly salaries. On paper, the figures seemed so unreal and surreal. I could fully understand why some employees were tempted. Very honestly speaking (literally), if I was not made of stronger moral fibre, I would have similarly succumbed too. If so, I would probably be in one of the following businesses today - baking, cooking, laundry or electrical and plumbing works - jobs for ex-offenders for which training is provided by SCORE (Singapore Corporation of Rehabilitative Enterprises).

When Philip, a senior clerk in BNP saw me leaving the office at 5 pm sharp, he blared out: "You've got to take advantage of the time difference between Singapore and Paris, you know?"

(I philiped flipped and interpreted what he was saying as: "The bank has to take advantage of cheap labour, you know?")

He also said: "You've got to work lots of overtime when you want to work in the bank!"

(And I thought that he was saying: "If you are unwilling to work overtime, you might as well resign!")

So resign I did. I went home and typed my resignation letter on my good old-fashioned manual typewriter right away. When BNI 46 offered me $50 more per month as meal allowance, I literally grabbed the offer. True, $50 meal allowance wasn't very much but at least I wouldn't go hungry with it.

Three months later, my present employer offered me $465 a month, which was quite comfortable in those days. (Imagine, if someone offers you almost double your pay today, wouldn't you have grabbed it too?) Since then, no one offered me a better pay and I remained loyal to my employer till this day.

I heard that NHB (National Heritage Board) is looking for a Corporate Communications Executive. Hmm... I wonder how much they are paying?
Posted by Victor at Friday, July 14, 2006

Be very careful of what your wrote, Victor. There are some "bakers" among us, and what your wrote about a job opportunity offered by SCORE could well be an affront to them. :P

Oh, I'm sure your play of word with "specimen" and "sample" was intentional. Looking at your car and other assets, you've sure come a long way, kiddo. Can consider retire early, some more. LOL.

What I wrote are facts, Chris. Sorry, I know you are a baker yourself.

Frannxis, my story was in the late 70s. Don't remember paying 50 cts for char kway teow. More like $1.50. Bus fare was maybe about 50 cts for an average trip.

Cannot be lah victor, going by your age. I remember my mum used to pay on 50cents for a bowl of prawn noodles. I was about 10 or 11 in the early 70s. My recollection was vivid because I took (more like stole) the 50 cents (my mum always put it on top of the kitchen cupboard) to buy some titbits and got a caning from my mum I never forget. Hee.

You can't be younger than me, or Frannxis leh.