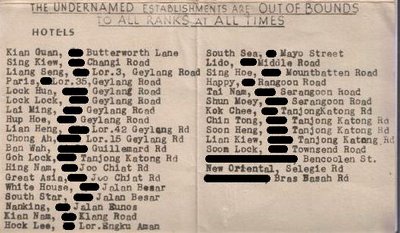 The establishments which were out-of-bounds to all ranks
at all times. House numbers and some details have
been masked out to protect existing property
business owners.

In my previous post titled British Legacies (1), there was a map showing the "out-of-bounds" areas to British military personnel in Singapore. In this post, Mr Peter Tan continues his story:

It must have come as a surprise to everybody as to why these restrictions existed. Did Singapore become the "Suzie Wong" of South East Asia? To side-track a bit, let's go back to the days of the Malayan Emergency (1948-1960) which saw the rising tide against imperialism and colonialism - two keywords often used by our country's founding fathers.

In order to provide manpower to contain the spread of Communism, Britain dispatched a number of regulars and National Servicemen to the region. National Service (NS)? Did I hear NS for the British? Indeed. NS was introduced in Britain in September 1939 by an Act of Parliament. At the end of WW2, the British Parliament decreed that all males in the British Isles, barring coal miners, between the age of 18 and 25 years had to do 18 months National Service in one of the three services: British Army (BA), Royal Navy (RN) or the Royal Air Force (RAF). This went up to 24 months because of the Korean War and the Malayan Emergency. Many chose an overseas posting for more pay and for the excitement of a foreign land. Many chose Singapore. When these single males arrived they were billeted in places like Nee Soon, Slim Barracks, Gloucester Barracks, Seletar, Kangaw, Terror, Selarang, Changi, Kranji, etc - names that should be very familiar to every SAF personnel.

Although there were the usual NAAFI or Union Jack Club that a young British male could go for that Tiger Beer (almost every British chap looked up to our Tiger, a sign of good international branding), there was always something mysterious about the tropics. Coming also at the time of the Maria Hertogh incident in 1956, it made sense for the British to impose strict discipline among the NS men. Since pay day was on a fortnightly basis, it was a time to leave camp and head for town. Many places soon understood that a typical "Johnny" was very generous when it came to fun and drinks.

Bars were not set-up by the triads but commercially-minded people who could make an offer few could resist. Many Chinese girls worked as bar girls, hoping for that better life - either more money or to marry a foreigner and sail to a distant land. There was very little a young Chinese girl or a woman with social-marital problems could do. Jobs were few to women in the 1950s and a good education for women was not well-received by many conservative families. So it made economical sense to consider the bar option.

Many bars sprouted up in the Bencoolen Street and Bras Basah area. Business cards were used as the means to lure the British. 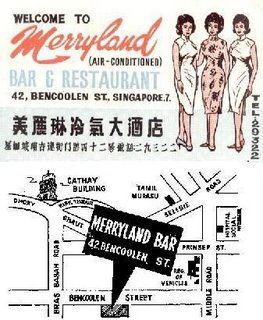 A business card of a bar at 42 Bencoolen St.
Note that the postal district there was only
a single digit "7" and the telephone number
had only 5 digits. Also, most illustrations then
were hand-drawn pictures or cartoons. 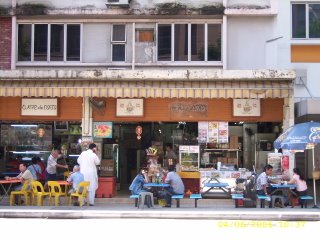 Coffeeshop at 42 Bencoolen Street today when
postal districts are in 6 digits and fixed line
telephone numbers have 8 digits.

Many "hotels" (a kinder term) bloomed all over Singapore. The punishment for any British soldier caught in a raid by the military authorities was the docking of half a month's pay. Though it had its initial impact, it was still not good enough. CROs (Company Routine Orders) and a card (see first photo) was handed to every new arrival to Singapore. The problem became less severe by 1963. By then, National Service was abolished, NS men demobilized and a new profile of regular British military personnel came to protect and bravely defend Singapore during the Indonesian Confrontation period.

Back in the mid-60s when a "swaku" like me came to town to study at one of the finest English-medium educational institutions, we spent our Saturday evenings (after a game of rugby or scouting) exploring the dark corners of Bras Basah Road and Bencoolen Street. Not too far from our great institution was a bar next to the Bethesda Bras Basah Church (which I think could now be the Carlton Hotel): 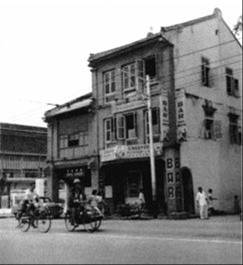 The bar in Bras Basah Road (above) and its business
card (below). Note that "In Bounds" simply meant
not "out-of-bounds" and the handwritten suggestion
to "just ask for Daisey".

By 1967, the neon advertising board on the building facade of the bar looked like almost falling to the ground. Luckily it was suspended on one side by a thin wire. The paint work on the concrete pillar which had the word "BAR" had faded away. One day, we sneaked up the creaky stairs to the second level and saw a row of flashing coloured tungsten bulbs, a singer blasting into the microphone and a crowd of locals doing the "Twist". Suddenly a big burly bouncer approached us. We quickly made our exit after a small "Q&A" session. We found out about the history of the place but its heyday was over.
So where we now find our traditional "red light" areas or bars in places like Joo Chiat, East Coast Road, Jalan Besar, Tanjung Katong Road and Geylang, spare a thought and think back to "Yesterday Once More” when it all happened.

2. Straits Times article dated 3 Feb 2004 about ex-British airmen based here visiting old haunts and recalling the 1950s-60s and Changi Village bars. (There is a photo of one such bar in the PDF version here. There is a also mention of Stamford Cafe (see map in previous post) in the article;

3. This site contains many photographs and images contributed by people who lived in Singapore during the 1960s and early 70s and who were mostly children of British Armed forces personnel.

Thanks for a very informative article. I remember the Bethesda Church you mentioned. Isn't it the one associated with the sentional murder case where the church caretaker chopped up the body of his victim and cooked curry with it?

No lah. That church was next to the YMCA at Stamford Road.

Chun See, apparently you have run out of comments to say.

Hmmm... the world's oldest profession. It happened during colonial Singapore, and it's happening now despite the clamp down on massage parlours in the heartland (they would simply move elsewhere). But why advertised the "sleazy hotels" by way of banning them to the British soldiers? Didn't they know that forbidden fruits always taste sweeter?

Yes Chris, at first I also thought that telling the soldiers not to visit those hotels could have the opposite effect instead. It was like giving the soldiers information on where such services were available and tempting the curious to give the establishments a try. But on second thought, I think that the authorities did the right thing because an errant soldier could not claim that he was not informed if ever he was caught.

I remember the dusty bookshops in BB where we look for second-hand story books and 10-year series...and there was a bookstall in the 'dark corners' selling 'forbidden' books and magazines.

The site with the old pictures of Singapore is interesting.

The movie "Virgin Soldiers" was based on a true story of British NS men who were based in Singapore. The camp was Nee Soon Camp. Unfortunately we won't get to see the movie because it had BUGIS STREET as one of the places frequented by the British boys.