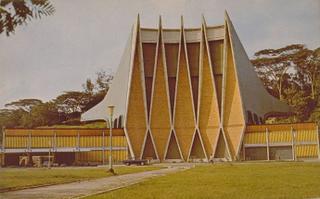 If you read my previous posts, you will know that I like to reminisce. My next few posts will be about vanishing scenes in Singapore. An integral part of the ever-changing landscape in Singapore must be the renewal of its old buildings. As we are a small and young nation undergoing rapid development, many old buildings have to be torn down to make way for new ones. Some buildings are demolished for justifiable reasons while others have to go solely because of commercial considerations.

That's the protagonists' point of view. On the other hand, the antagonists would argue that it is precisely because Singapore is a small and young nation that its history is so short and hence its historical relics so precious and few. Therefore old buildings with unique architecture are invaluable artefacts which ought to be preserved. Thankfully, this job of deciding whether a building is justified to be preserved rather than demolished rests in the hands of Urban Redevelopment Authority (URA) of Singapore. It identifies and recommends buildings of historical, architectural and cultural merits for conservation.

One good example is the National Theatre which used to stand near the junction of River Valley Road and Clemenceau Avenue. Officially opened on 8 August 1963, the theatre was built to commemorate the attainment of Singapore's self-government in 1959.

If this old memory of mine serves me right, in the late 1970s I attended a concert by the pop group America in the theatre. My recollection is that a resplendent fountain (by 1960s standard) stood at the front of the theatre. At the back, the distinctive feature of the building was its cantilever roof which provided spectators some form of shelter from the sun and the rain. It was however quite useless during heavy downpours as some rain could still get in. Being open at the back also meant that there was no air-con – a minus point which most 1960s folks didn't seem to mind. (There weren't many places with air-con then anyway. Even public buses were cooled by natural breezes from their open windows.) Besides, being a 'semi-open air' theatre somehow meant that people need not bother to dress up for the shows – they could come as they were, in their singlets, shorts and char kiaks (wooden clogs). The gate keepers (don't remember there were any ushers as it was free-seating), would never stop you because you were not properly attired so long as you did not over expose yourself. Yet another great advantage was that if the tickets for any show were sold out, you could still catch a free glimpse of the performance by standing on the hill slope (Fort Canning) which was overlooking the back of the theatre. It was even better if you had brought along a pair of binoculars.

When I think of the National Theatre, memories of the Van Kleef Aquarium just next to it comes flooding back. This aquarium was nowhere near the standard or the size of today's Underwater World in Sentosa but for a mere S$2 entrance fee, one could gawk at the 2 crocodiles (in an enclosure, of course) at the entrance before entering the aquarium to view the marine fishes. In contrast, today's entrance fee to Underwater World is more than S$10 and that's not counting the admission fee to Sentosa Island itself. (That's why people say that SENTOSA stands for So Expensive, Nothing TO See Anyway, haha.)

Then there was the River Valley swimming pool nearby too. I had a few swims there before it also had to make way for redevelopment. I guess it must be too expensive to maintain a swimming pool in the heart of the city. (This area is within Singapore Central Business District or CBD.) The land is just worth too much there, not to mention the water. Clarke Quay (see earlier post) was just opposite the swimming pool.

Many Singaporeans were deeply saddened when the National Theatre had to be demolished in 1986 due to structural reasons. (I think it was because the cantilever roof was structurally unstable, meaning that it might fall down anytime.) I was one of the sad people. Now we have the spanking new Esplanade Theatres on the Bay, also affectionately known to locals as 'the Durians' because of its thorny roof structure. (Actually the roof was designed that way to resemble a microphone – a supposedly clever and relevant reference to the activities to be staged inside the theatres.) But no matter how well-designed and acoustically-sound (pun intended) the Durians are, they could never evoke the nostalgia which many people have of the old National Theatre... sob, sob. 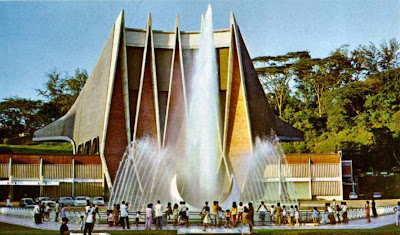 Here is another shot of the National Theatre. It is one of several other photos of old Singapore, probably from old postcards, that was emailed to me by a friend recently. This one has the resplendent fountain that I was talking about in this article. It was probably taken at a later date than the first one.
Posted by Victor at Wednesday, September 21, 2005

I have fond memories of National Theatre Victor. Shame it had to be torn down. Anyway, I was too young to care then. If the theatre was demolished because it was structurally unsound, why can't the gahmen build an exact replica, brick by brick? Does a Theatre built to commemorate the attainment of Singapore's self-rule in 1959 holds no sentimental value to anyone at all?

My dad used to bring us kids to the Van Kleef Aquarium. I can't recall seeing any crocodile but remember being thrilled by the many colourful fishes at the aquarium.

It's really sad that buildings of national significance have to give way to widen the roads, erection of monsterous, eye-sore skyscrapers and commercial buildings. All in the name of advancements of course, so we've been told. But then again, Andrew Matthews, the guy who gives us "Happiness in a Nutshell" and "Being Happy" once wrote that "trouble starts when one gets too attached to things". So, maybe it's a subtle we of telling us not to get too attached with our emotions and that changes are inevitable. As the saying goes, "the only thing that doesn't change is change". Hmmm... getting all philosophical again ...

I gather you'll be blogging on other buildings of yesteryears in your part 2 or part 3, etc, so I'd rather not spoil your fun by naming some of those bygone buildings. I'll just wait for your follow-up entries, hopefully not after the last spider has spun its web... hehehehe

And yes, the River Vally swimming pool. My sister and I, together with some of her friends used to swim there too. It was a public pool frequent by quite a few expatriates living near by. It was also a pool frequented by gays, if an article I read from the ST years ago is to be believed.

If you've read my blog, I've also posted an entry on Club Street, along which stood the house in which I grew up. In fact, the stretch of houses there have all been preserved and have been converted to pubs and advertising firms.

Never mind that you were too YOUNG to care about the National Theatre being torn down then, Chris. The fact that you remember all 3 old relics in that vicinity automatically qualifies you to be categorised as of the same generation as me, hee.

You seem to have a soft spot for old buildings too eh. Yes, I read your post on Club Stret, the street where you lived. Somehow, I feel that just retaining a building's facade but changing everything else behind it doesn't really count as preservation of the building. At most, it is 'superficial conservation', literally speaking.

Wah, I am so flattered by your very quick comments leh. What, do you regularly check my blog for new posts like you check Rockson's? Don't have to be so kiasu mah. I seldom post one, maybe only once or twice a month at most. Most of the times when you visit my blog, you will be disappointed because got no new posts. However you will usually be the first (and only one) to comment on my blog, save for that one time when Ria beat you to it, wahaha. If I don't blog on Pulau Ubin or other green issues, I bet she won't return. But wait... do you think that she's interested in conservation of old buildings too? Oh no, maybe she has already bookmarked my blog in her favourites!

Chris, Victor, you forgot to mention the most imp attraction at Van Kleef, namely the tank of Piranha's at the entrance on the 2nd floor (I think. Most of the kids were fascinated by the stories of these 'man-eating' fish.

One more thing. Talking about swimming pools, my brothers and I used to go to the one near "Ang Kio Tau" (Red bridge)

Test you - tell me if you know which pool I am talking about.

Can't remember a thing about those man-eating fish, probably because I was not in the water with them, haha.

Er... you got me there. I really don't know where is Ang Kio Tau (scratching my head). Maybe I will ask a senior taxi driver next time. (I just cheated and asked my father-in-law who is a retired taxi driver. He said it is near Norfolk Road. So I hazard a guess - is it Farrer Park Swimming Pool?).

But can I compensate for my ignorance by telling you that I do know where is Pek Kio ('White Bridge' near Cambridge Road) and Orh Kio Tau ('Black Bridge' near Lower Delta and Havelock Road junctions)?

Full marks to your father-in-law.

I have heard of the other 2 bridges, but only today I know where.

My parents had a picture in front of this theatre, during their pak tor days. Mum was wearing a big black rimmed specs, and the most retro, shortest dress and platform shoes, with the most precise flipped-out shoulder-length hair and Dad very slim, young and wrinkle-less.

Remembered the aquarium too, Mum brought us there a couple of times, the crocodiles (very huge) and the piranhas, very impressed with that. The theatre is no longer there by that time

Thanks Suzanne for visiting my blog. Do you have a blog too? If so, you can scan in your parents' photo for us to see. Yes, we all know how funny we can look in such dated photos - I have some where I was in bell-bottom pants and wearing black plastic rims glasses - too shy to put them in my blog. But you know what, fashion always seems to come around again.

Nice to see this. I am trying to construct this building. Do you know if there is any info on the side and rear of this building?

Most of the images that I see are on the front side, together with the fountain.

Someone told me that the national theater seems to be open air and the building structure is actually open on either side. Is this true.

If you have any info on this building, I'll like to contact you. Btw my email is at kopicreations@yahoo.com .

Thank you for your time :)

Sorry, I do not have any photos of the side views or back views of National Theatre.

Did a rough search for you on NHB's PICAS website and all I found was this picture.