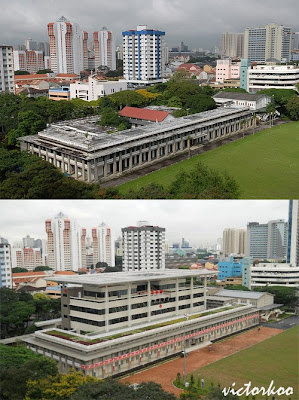 Oh my, how lucky the residents of this HDB block are - they could watch every football game held at the stadium from their homes!
Posted by Victor at Monday, August 30, 2010

i guess 'then and now (2)' will be the albert street sit flats.

I used to call mine, 'Manhunt' ie: seeking former band boys and girls.

All the best with the concept. Should prove challenging again!

Nice 2nd shot Victor. I wonder is there a need for so much space for the PA HQ? Are they conducting classes there too? It look rather odd with the tall building protruding out in the centre.

Hi Victor,
Is that what Victoria looks like after her facelift?

the lapse between the two pictures could not have been very long because the cityscape remained more or less the same except for an obvious change of colour in one of the buildings. or was it photoshopped?

The architect was the then Chief Govt Architect Frank Dorrington Ward

My brother was a student at Victoria School in 1949.
Not all HDB residents in the area can have a good view of the stadium. Can you tell me from which angle your photo was taken?

Thanks Anonymous for the information. The architect of Victoria School@Tyrwhitt Road was indeed Frank Dorrington Ward.

Philip - The photo was taken from the staircase at one end of the top floor of Blk 806 King George's Avenue.