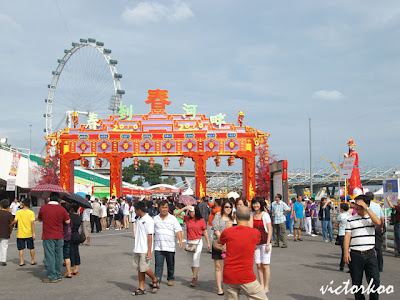 I was at the River Hongbao yesterday. River Hongbao is being held at The Float@Marina Bay, previously known as Marina Bay Floating Platform. (Have you noticed that even names of places keep changing here?) 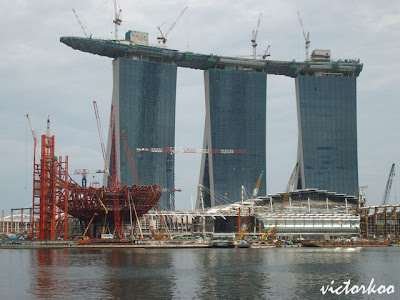 While at the event, one can't help but notice the Marina Bay Sands (MBS) standing just behind the God of Fortune. It is as if he is blessing the soon to be completed MBS with good luck in the Year of the Tiger.

Coincidentally, its counterpart Resorts World Sentosa (RWS) opened its doors at the auspicious time of 12.18 pm on 14 February 2010, the first day of the Lunar New Year. 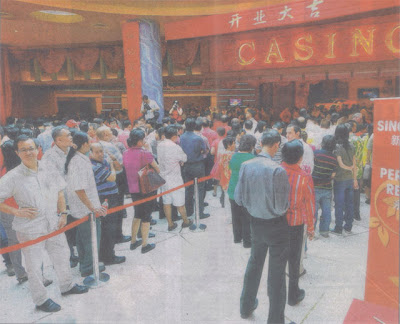 ST Photo dated 16 February, 2010
Perhaps a not so well-known but no less important "opening" is the recent launch of the online newspapers archive called NewspaperSG. It is an initiative of the National Library Singapore that provides library patrons with access to digital copies of Singapore newspapers dating back to 1831.

Do you know whose original idea it was to build the Integrated Resorts? Certainly not this guy. Searching through NewspaperSG, I found a letter in the Straits Times Forum page of 10 June 1985 which was written by someone with the pseudonym "Go for Broke" who suggested the development of a casino as well as a night racing track in Sentosa. (Possibly since the 1990s, Straits Times had disallowed the use of pseudonyms for letters to the Forum.) The letter is reproduced here:

While neighbouring countries are feverishly developing new holiday resorts to promote tourism, our own efforts in this area seem perfunctory by comparison.

On our part, we should upgrade Sentosa into a holiday resort of international standard. We could, I venture to suggest, develop a hotel-cum-casino complex there and perhaps throw in a race track for night racing as a novelty.

In these difficult times for the tourism industry, bold and imaginative steps need to be taken by the authorities concerned to attract more tourists to our shores.

Guess what was the reply from Sentosa Development Corporation (SDC)? The suggestions were dismissed, of course. Here's the reply dated 15 June 1985 from Miss Cheryl Lee, Head (Public Relations) of SDC:

Casino out of the question for Sentosa

We refer to the letter "Sentosa casino will draw tourists" by "Go for Broke". (ST, June 10).

The development philosophy of the Sentosa Development Corporation is to develop Sentosa into a resort island for tourists and a holiday retreat for Singaporeans.

The many attractions cater for the varied needs of the visitors and are aimed at the family group as well as the individual. Plans are in hand to upgrade existing facilities as well as to add new attractions.

Wholesome recreational activities are also organised for a wider participation. The casino and race track idea does not form part of the aforementioned concept.

We would however wish to thank "Go for Broke" for his interesting suggestions.

A quarter of a century later, everyone now knows that both ideas of "Go for Broke" have been adopted by the Government, although the night racing track is not located in Sentosa. But we did even better, didn't we? We will soon have TWO casinos instead of one. And the rest, as they say, is history.

In fact, we should thank "Go for Broke" for the suggestion to develop the casino and night racing track. He/she is obviously someone with great foresight. The only problem about expressing our gratitude is that we don't even his/her real name!
Posted by Victor at Tuesday, February 16, 2010

"In fact, we should thank "Go for Broke" for the suggestion to develop the casino and night racing track. He/she is obviously someone with great foresight."

Victor. I am afraid I have to totally disagree with you on this. Take for example, the casinos. It is too early to tell what the effects of these two projects will be in the long term; and you shouldn't be so quick to pass your judgment on the SDC's reply. SDC's decision was entirely consistent with the values held by our leaders, and Singaporeans of that generation. Of course we knew at that time that building casinoes would be an enormous commercial success, but that decision was made based on moral values; not economic factors.

You are also too quick to declare the building of the casinoes a success. I look at same photo of people queuing and sleeping at the RSW and I feel nothing but dread. MM Lee was right when he said that the Chinese are incorrigible gamblers. Today, there's another photo showing the ATM machines just a stone's throw from the casino.

Yes; indeed Go For Broke may be right in one thing. Your God of Fortune will bless the IRs and many Singaporeans will Go Broke.

As for the Night races, I think they are a big flop. So much resources and disruptions, and what do we get in return? On one hand our govt keep boasting about the 'green' efforts, and then they go and start this type on anti-green projects.

It's going to be tough for the casinos as well as the other new attractions. Crowded for a while but as the months go by... Just wondering.

They have since lost their family, homes and savings! Beware you casino crazies out there! Listen to what they say, "The house always wins!"

Wah Chun See, you seem to feel quite strongly about this topic. Now if you re-examine my article, nowhere in it have I declared the building of the casinoes a success. How can I when MBS has is still being constructed and RWS has only just opened its doors? It is too early to say whether they will be successful.

Anyway, I will not be surprised if the Government's yardstick for success is different from ours. Is the success of the casinoes measured by their earnings and economic benefits alone? How about the social costs which are hard to measure in the first place?

The nub of my article is about who came up with the idea for the casinoes and the night racing track, and not whether the decision to build them is right or wrong. Having put morals aside, someone who came up with ideas 25 years before they are implemented must have had great foresight.

Andy, I have heard stories about how one can stand a chance to beat the casinoes without cheating. One is that you only play big but limit the number of games to just a few. Another is to double your wager every time you lose a game. When you finally win, you stop playing altogether.

I will leave you to figure out whether the two stories are flawed. (Hint: How many people have the willpower to stop when winning and how many have enough resources to keep doubling their wagers? Before you realise it, you would have dug a hole big enough to bury you.)

Interesting little bit of trivia drawn from the NLB's archives and a reminder of how certain things have changed since then. I think that the decision on the Integrated Resorts and the Formula One Night Race must have been made after considerable deliberations on their pros and cons. What is hoped is that public education coupled with the $100 tax would deter potential problem gamblers from squandering away their life savings.

On a personal note, I am optimistic that the year of the Tiger will yield much great tidings for all of us. Oh, and before I forget, Happy Lunar New Year to you Victor!

I think it is right to make economics one of the main reasons when some formulating policies or even when deciding whether to preserve a building.

Because we are quite well off, we tend to disregard economics and say we are soulless and money-minded.

I do not think economic success make us less moral.

It is our economic stability or strength that enables us to help other countries or gives us the leisure to debate moral values. If we were in a poor country, we would be struggling to make ends meet. Some of us could be selling our organs illegally, some might even be working as maids or other profession in other countries.

Some of us fear that the casinos would erode our moral values or bring misery to family life.

I think some will gamble more, many will visit the casinos a few times but I doubt many people will become hardcore gamblers just because there are two casinos.

Those who harbour the idea of getting rich from the casinos will soon be disillusioned.

There might be a few sad cases and no doubt these will be highlighted in parliament and given prominence in the media.

I'm waiting for Casino Open House so I can go in free.

2 decades ago, I walked into some of Las Vegas's casinos like Casino Casino, Holiday Casino, Flamingo, Caesar's Palace, just to check out the place. I was looking for entertainment of another sort; musical/dinner shows. The going rate to watch Sammy Davies Junior, Tom Jones, Dinah Shore, Diana Ross was US$20/pax for 1 drink. Meals were reasonable by US standard - US$7 for buffet and eat as much as you like. This was possible because the casino subsidized the food and entertainment.

I was told by my friends (who just stepped into RWS)that the casinos in Singapore which charge you S$100/pax for entry offer foc entertainment (international stars), "live bands" and foc drinks and food.

So considering if one just want to looksie-looksie or go on a date at the casino (but not gamble much), then an evening's outing is worth more than S$100/pax.

Then I think the casino is good for SPG type dating - $50/pax. lol

I think I shall stick with my date in the hotel toilet, thank you.

Economics takes precedence over all else. Pointless to be coy over the establishment of casinos here. More countries in the region have recognised the tremendous economic benefits of casinos. Yes, may the God of Fortune bless the casinos!

Yes, may the god of fortune bless the casinos, all the non residents lose their life savings in our casino, muhahah ....

And we can all sing the chorus with MM, "Dunno why they like to lose their money in the casino".

not all who step into a casino are there to gamble. i have been to the crown casino in melbourne a number of times, not to gamble but to enjoy the food and the free entertainment. it is not that i have not gambled before; on my first visit to genting many years ago, i made a few hundred ringgit from the jackpot machine. i did not lose back because i stopped playing after collecting the winning.

I don't think we need to wait until the casino opens before we notice strange gambling habits.

Some of my late aunties used to gamble this way. They wrote numbers of pieces of paper and tolled them up and placed in a mug. Shaking the mug, the paper fell on the floor. They asked the pet dog to pick-up its favorite number. After the dog did that, they wrote the numbers down andw ent to a provision shop to place their bets. If the numbers did not turn in a winner, the dog was not given goodies.

I cannot tell what's the name of the game. Anyone can help?

I'd agree that it's quite a challenging landscape, but in my many visits i've never really had a problem getting around or finding hospitality for english speaking tourists. The casinos were pretty brilliant too although I'm not a massive gambler.