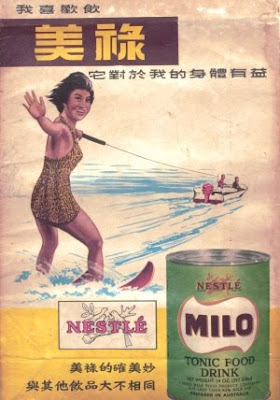 The National Museum of Singapore is currently holding a very interesting exhibition called "The Bag - Carrier Bags in Singapore from the 1950s to the 1980s":

"From basic utilitarian objects, carrier bags in Singapore have come a long way to become museum pieces. This exhibition traces the evolution of local consumer culture through 60 carrier bags from the 1950s to the 1980s." 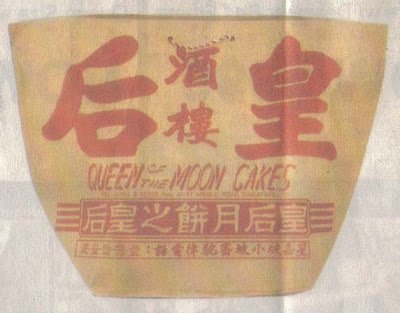 Empress Restaurant Paper Carrier Bag - This signature brown carrier bag was designed to hold mooncake boxes, which sit nicely on the brown square base. Over the years, the graphic designs on mooncake carriers have changed but their shape has remained pretty much the same.
Never did I imagine that the humble bags which my late mother used to carry live chickens back from the market would one day make it to the museum as exhibits! As a kid, I always looked forward to seeing the brown paper bag that brought delicious mooncakes and little pastry piggies in plastic cages from the Queen Of The Mooncakes. After the festival was over, the bag would be recycled for carrying things... and sometimes, even a live chicken. It was amazing how well the bag fitted the chicken snugly like a glove so it could not flap its wings. It was as if the bag was tailor-made for the chicken. Only its head and neck would be exposed and its head would bob about, surveying the surroundings like a submarine periscope. The light brown colour of the paper bag matched well with the darker brown feathers of the chicken. And if the chicken soiled the bag, simply discard it (the bag not the chicken). If not, you could recycle the bag again.

They say that a picture paints a thousand words. My friend Peter recently said that I've got great IT skills. So, here is a photoshopped photo to show you what I mean: 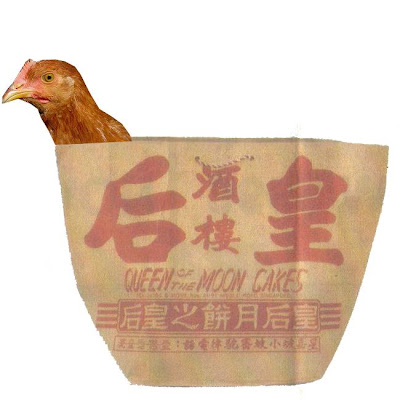 Chicken in a brown paper bag

Bata Carrier Bag (1960s) - Bata, a Czech shoe company which started operations in Singapore in 1931, positioned itself as a one-stop shoe store for everyone. Its carrier bag said as much with the picture of a family holding a big leather shoe.
Oh yes, I remember the Bata bag which came with intertwined red and white strings for a handle and the slogan "First to Bata then to school". And then there were some people who made fun out of the brand by saying that it stood for "Buy And Throw Away". But in a way, that is true even today, isn't it? If you don't use your old shoes until they are good bad enough to throw away, would you have the chance to buy new ones? Definitely not in those days when most families were poor. 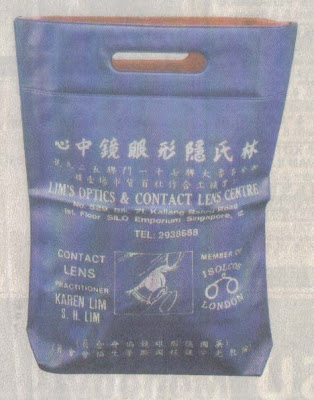 PVC Carrier Bag (1970s) - In the late 1970s and early 1980s, the production of the plastic bag emerged as the largest manufacturing group in Singapore's plastic industry. Consumers preferred such bags as they were light, water-resistant, easy to carry and durable. Thick bags with die-cut handles such as this were extremely popular.
I was given a bag similar to the one above when I collected my black plastic spectacles from Chai Meng Optician located on the ground floor of a 9-storey red-brick SIT flat in Upper Pickering Street. Maybe they had to use such a heavy-duty bag because my glasses were thick and heavy like the "bottom of a Coca Cola bottle", as a so-called "friend" puts it. The SIT flat, my thick glasses as well as the friend are gone today - I had cataract operations done for both eyes 10 years ago and the short-sightedness was corrected as a "side-benefit". I don't think I need to elaborate why the other two items disappeared as well. 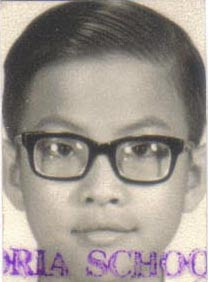 Unidentified student wearing thick black plastic-rimmed spectacles (not an exhibit) like mine.
Other exhibits include the following items: 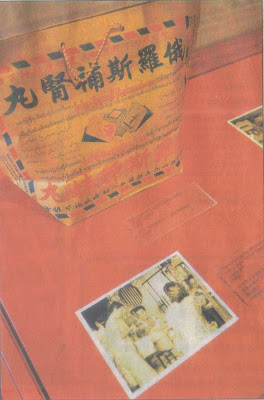 Paper Carrier Bag With Advertisement (1954) - The oldest carrier bag in the exhibition doubles up as an advertisement for Goles kidney purifying tablets, with text in English and Burmese. An accompanying image shows how the bag travelled with its owner to public spaces. 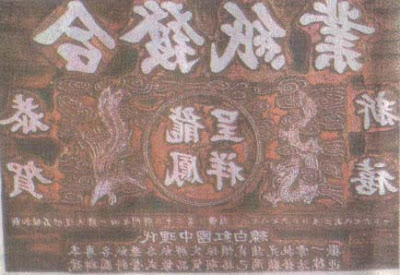 Letterpress Metal Template (1980s) - This template belonged to Hup Huat Paper Products, which went into the paper-bag business in 1942. Eventually, the production of paper bags became less profitable and the family-run business stopped making them in the 1990s to focus on supplying paper instead. 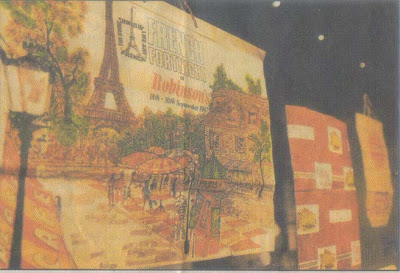 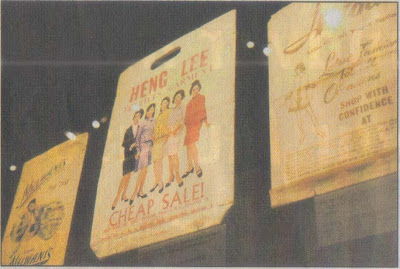 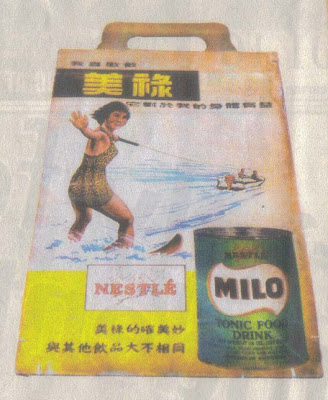 Carrier Bag For Nestle With Milo Advertisement (1960s to 1970s) - Advertising text and illustrations covered bags, promoting products and services like posters and banners did. Bold prints and colours were used to make the message or product stand out. 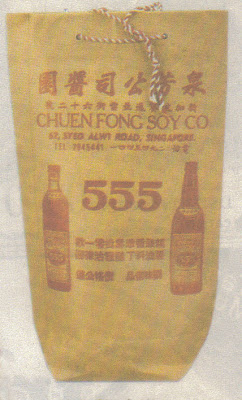 Paper Bag (1980s) - This paper bag of Chuen Fong Soy Company advertises the product and comes with intertwined red and white strings for a handle.
More About The Exhibition:

You can find out more about the exhibition from this link.

Source of photos and captions used for this post:

Here's a sypnosis of the exhibition from the organisers themselves, i.e. the National Heritage Board, extracted from the Dec 09 - Jan 10 issue of the NHBuzz: 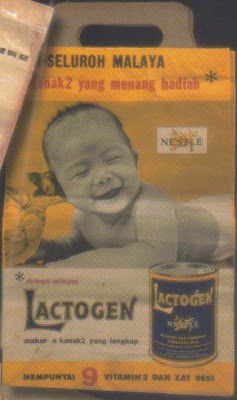 This one by Lactogen, a brand of baby formula milk, is in Malay. Translation by Victor: "Throughout Malaya, prize-winning children drink Lactogen. Children's food that is complete. Contains 9 vitamins and iron." (Note that there are even 2 asterisks to indicate that the phrase on top should join to the one below. How thoughtful!)
"From its humble beginnings as a form of packaging to its present status as a fashion accessory, the simple carrier bag has come along way. And paying tribute to this daily necessity is a special exhibition titled THE BAG: Carrier bags in Singapore from the 1950s to the 1980s at the National Museum of Singapore. Featuring over 60 rare vintage carrier bags (Bata and Yaohan anyone?) from the National Museum's collection, THE BAG documents Singapore's consumer culture through the years.

Apart from their utilitarian function, mass produced carrier bags also serve as markers of Singapore's retail history and evolution. Changing patterns of affluence, the growth of local consumer demand and the influence of Western culture were all instrumental in bringing about changes in Singapore's retail industry, and these were captured through carrier bags. Paper bags, for one, gave way to the increasing popular plastic bag in the late 1970s which were favoured for their lightness and durability. Preceding the onset of mass media, carrier bags were also one of the earliest and simplest forms of mobile advertising as businesses started using carriers to publicise their products and services.

Aside from charting the progress of our retail scene, this exhibition also shows how carrier bags spawned an industry of paper bag makers made up of industrious women who worked hard to produce the bags to help supplement family income in Singapore's early post-war period.

Amidst the sea of carrier bags we have today that take on all shapes and forms, THE BAG takes a nostalgic walk down memory lane and provides a refreshing look at the retail icons of yesteryears. Don't miss the chance to view original vintage carrier bags that have endured the times and survived chapters of Singapore's history."

i will try and identify the schoolboy. picture was taken in the 70s. student of victoria school at tyrwhitt road. now subject has a son, also in victoria school.

YG, this post is about old baggage, not old students. Er... maybe he just happens to look like somebody you know? :p Aiyah, people who look alike are a dime a dozen. Even Obama has a counterpart in Indonesia who looks 90% like him.

victor, should not use recycled bag to contain cock. bag may burst and you will have an accident on hand.
seriously, making paper bags was a cottage industry. i used to watch my neighbour make those paper bags in her kampong house.

Interesting read that brings back memories.

When I looked at the photo, the first thing I thought of was the bus-pass. Maybe the photo was taken from a bus-pass.

fr, victor's time in victorIA, no bus pass yet. more likely from his report card (book).

FR, you are right. The mugshot came from the bus pass of the unidentified boy.

Saw the carrier bags show about two weeks ago. Didn't quite like it though. Some of the bags are not that old.

There's another show on the same floor featuring Singapore 60s Malay and Chinese movies, music and street performances like the Chinese Wayang and Malay Bangsawan.

Notice that in those days, they often write the Chinese characters from right to left?

Thanks for sharing these photos of the "chee toi's" from bygone days.

Not that I'll have a chance to troop down to the exhibition anytime soon, but this is so interesting! Thanks for the great photos. Are you sure that boy is not you? Haahaa ..

Thanks for the post on this exhibition. I went there recently and enjoyed the displays which even people of my generation are able to connect with. The white plastic bag with the Yaohan logo was especially iconic and symbolic. It represented the lure of consumerist desire back when my brother and I were kids, and I can still remember the toy section at its store in Plaza Singapura which was truly "The Place To Be"... :)

Thanks for blog topic on nostalgic stuff of "old baggage"...for your surprise that these are uncommon collectible items for memorable keepsafe.

The cocks can always get new ones though ; )

Andy - Believe it or not, I have not visited this exhibition. Would love to visit when I have the time. But I like to proscrastinate. And I have 3 months to do so.

Chun See - Yes, the only direction which Chinese characters do not come in is from bottom up.

Walter - So your favourite shopping place was Yaohan. Mine was Chancellor at Outram Park.