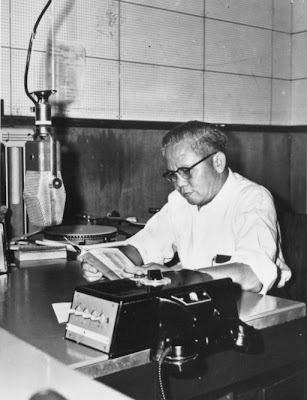 Lee Dai Soh telling a Cantonese story at Rediffusion in 1960. Photo courtesy of the National Archives.
My earlier post on the legendary storyteller Lee Dai Soh 李大傻 (literally "Big Fool Lee") attracted a comment from a reader named Jon. Among other things, he asked, "Could you kindly tell whether his recordings are available on CDs anywhere? I'm very keen to get hold of them, if available."

I got in touch with Roger via his email address roger@rediffusion.com.sg and collected 2 sets of the CDs personally from Rediffusion's office today. 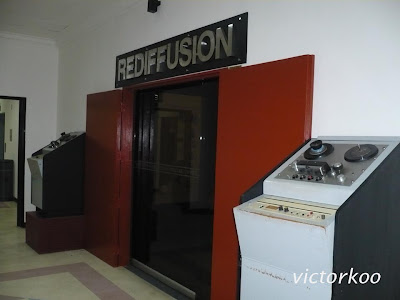 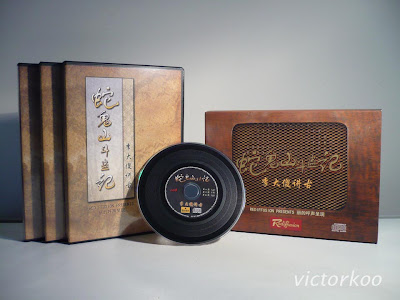 Rediffusion's office is no longer located in Clemenceau Avenue as shown below in a 1950 photo， courtesy of the National Archives. 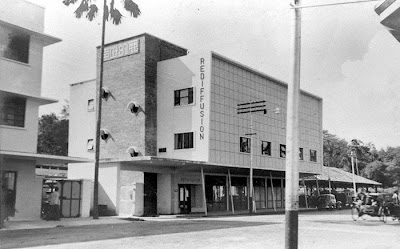 Their office was in Clemenceau Avenue up to the late 1980s or early 1990s, I think. Now it is at Morningstar Centre, 12 New Industrial Road: 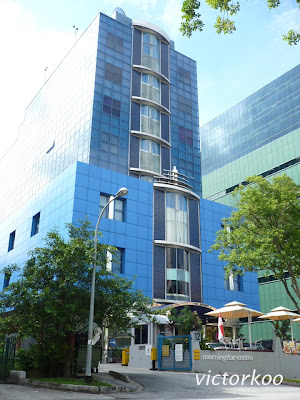 I met up with a very friendly Roger and we had an hour-long chat (off the air) about the good old days of Rediffusion as well as Roger's plans in moving his business forward.

Roger showed me what Rediffusion is offering now. 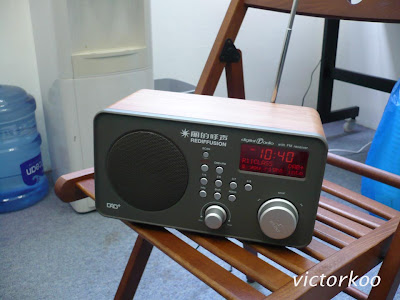 It is called Digital Audio Broadcast (DAB) service. The above DAB receiver set is provided free-of-charge with a minimum 15-month (1 year + 3 months free) subscription at S$192.60. The set produces crisp, clear and interference-free digital sound which is even more evident when played via an audiophile valve amplifier: 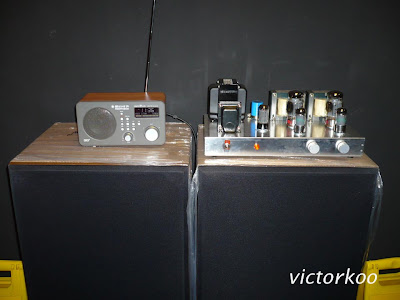 In terms of aesthetics, the receiver set is definitely far better-looking and more compact than the toaster-like boxes of the 1950-60s: 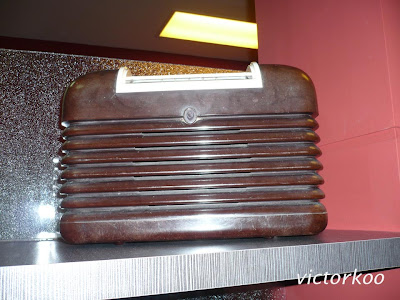 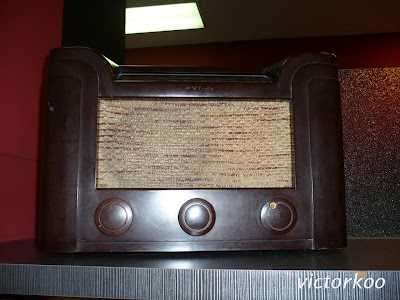 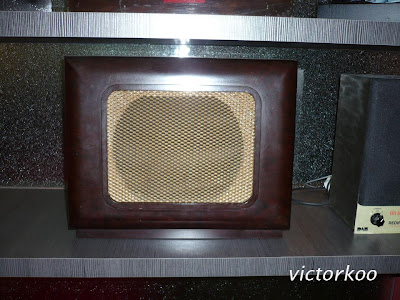 You can have access to 19 "unique informative, music and entertainment content" for as little as 43 cents a day. 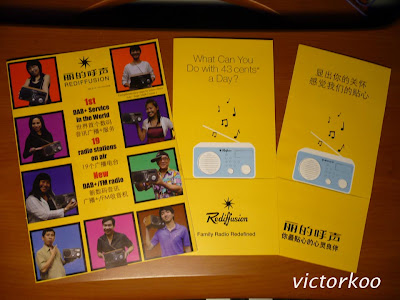 Some of the stations provide 24-hour non-stop commercial-free music, ranging from classical, jazz to hip-hop. Of course, the traditional Chinese dialect stations "Gold" (now called "RediGold") and "Silver" (now "RediSilver 25") are included in the package. Personally, I think it is very good value for your money.

If you are interested in Rediffusion's services or the Lee Dai Soh CDs, you may contact Roger directly via his above email address.

You can read more about the history of Rediffusion from this Infopedia link.

Other articles about Rediffusion in my blog are accessible via the following links:

I have faint memories of Rediffusion when I stayed with my grandparents as a kid... I think I recall listening to some Cantonese or Hokkien comedy routine; found them funny even though I didn't know what they were talking about.

Would love to hear audio samples from our early days.

Thanks for sharing this information with us. I thought Redifussion has ceased to exist. I think they should thank you for doing this free 'advertising' for them. I should say, 5 free sets of the Lee Dai Soh CDs should be just nice; one for each of you oldie friends :)

we had a reddiffusion set at home but because we do not speak or understand cantonese, we did not follow lee dai soh's stories. instead, my mother and my sisters listened to the hokkien stories told by ong toh at 9.00 p.m. at times, they would listen to ng chia kheng's teochew stories.

Victor, I task u to negotiate with them for a free trial service in our homes. Can or not?

Actually I tune in every night to Brian Richmond's program on 90.5FM. There's a small section called "memories" I think. It has contributions from people who knew the 60s and 70s. Worth listernin!!!!

Kevin - According to the Singapore Encyclopedia, Rediffusion was first introduced to Singapore in 1949. It was before my time and way before yours. :)

Those were the days before TV which was introduced only in 1963. Cinema shows, radio and rediffusion were the only affordable types of entertainment then.

Chun See - You forgot that I cannot take bribes.

YG - I remember Ong Toh but not Ng Chia Kheng.

Peter - Okay I will try. How long a trial period would you like? Is one month enough?

I listen to Brian Richmond's late night's radio shows once a while too. Yes, I also like the "memories" segment.

Roger - Are you reading this? Can you give a few of us a one-month no-obligation trial of Rediffusion DAB service, please? :p

LOL sorry guys haven't seen the blog in a week or so. Why didn't you guys drop me an email or call me directly.
How many sets and for how long? Promote for me lah... got 'incentive' :)

Roger - Thanks for the offer. I just polled my friends at yesterday.sg. So far no response yet. Will keep you posted.

Thanks everyone for the fond memories and support of Rediffusion.
Rediffusion will stop broadcasting on the 30th April 2012.
Although that is the official statement, but we still keep our spirits up and have not given up hope.

We, the staff of Rediffusion will strive our best and help preserve Redigold to carry on through the generations!

Meanwhile, we are collecting all memories, photos and videos on our official Redigold facebook group at www.facebook.com/rdfGOLD

[IMG]http://i40.tinypic.com/359ms2c.jpg[/IMG]
We will not be selling or giving away any of our old boxsets or vinyl collections, but you can purchase our production of Li Dai Sor's Audio Book at $28 a set of 6 CDs at our Rediffusion Studios.
Please let us know if you wish to purchase!

Please share all your memories there and don't let Rediffusion fade away!

We are so sad to hear that the Rediffusion is closing at the end of Apr 2012. I knew of Rediffusion as a very young kid in the late 1950s thro' my neighbour who subscribed one. I remember too that those years, the station's programs closed at 11 pm with the playing of the "Majullah Singapura". When Lee Dai Song's program was on air at I think 6 pm, people will gathered at the coffeeshop and listened attentively to his story-telling (Cantonese, esp. those old "sword-fighting" classics.

Hi Rediffusion and FL, thank you for your comments.

I also lived through the Rediffusion years from the late 1950s till the 1970s and am truly sad to see this "iconic entertainment box" go down history like this.

Many of us have fond memories of the dialect stories and songs which the box played throughout the day and night. Life was so much simpler then.

Hi, Victor, allow me to add something interesting. When my family was staying in Bukit Ho Swee flat, Rediffusion used to have promotions around 1964 to 1969. They would wired those flats with their sets (i.e. for those without Rediffusion subscriptions), and offered them free 7-day listening pleasure. After the free trial period, those who wanted to continue listening my subscribe. I wonder how many remember this.

So Rediffusion started the "free trial" thingy way before what modern-day outfits like Singtel did to their Mio TV. I certainly didn't remember this marketing strategy of Rediffusion. Thanks for the comment, FL.

Hi Claire, thanks for writing.

The original CDs are very hard to get now. However, if you are really interested, you can still get copies (not original). Please email me at koo[dot]victor[at]gmail[dot]com for more details.