David Marshall was appointed as Singapore's first Chief Minister on 6 Apr 1955 but resigned on 6 Jun 1956, after the breakdown of constitutional talks in London on attaining full internal self-government. Singapore managed to attain self-government only in 1959. In May that year, Singapore's first general election was held and PAP came into power in an uneasy united front with the communists to fight British Colonialism.

The defence of Singapore then was still the responsibility of the British. However on 16 Jan 1968, the British PM, Mr Harold Wilson announced the intention to withdraw all of Britain's 35,000 troops stationed in Singapore by end 1971. Singapore was unprepared for this bad and shocking news as the nation was less than three years into independence from Malaysia. It was only in the very initial stages of building up its Armed Forces - the first batch of 900 National Servicemen was still under training. It also badly needed a strong defence force in order to attract investments. Even with National Service, Singapore was under severe pressure to take on the burden of defence in just under four years. But we did, as the lyrics of a national song goes. And as they say, the rest is history.

So what are some of the legacies which the British left behind? This post, the first part in a series, will surely either bring back memories for you or if you are younger (ahem, cough), you will be surprised like I was by some of the details uncovered here.

Mr Peter Tan, a recent friend I made in blogosphere, very kindly provided me with some old images for this series. He also elaborated on the very interesting history behind the images (which I will blog more about in my next post). When Peter was about 10-year old, he inherited a pile of photos and memorabilia from his British neighbour who was based in Keat Hong Camp at that time. Clearly sentimental about the legacy which the British neighbour had left him, Peter had faithfully kept these artefacts for more than 40 years, despite objection from his wife.

The first image which Peter provided me was an old map, circa early 1950s:

For a larger image of the above map, please click here.

The map covered part of the city area and showed the areas declared out-of-bounds to the British army personnel based in Singapore. Coincidentally, my childhood home (1), primary school (2) and secondary school (3) are all within the map. Bugis Street (0), a favourite haunt for British servicemen, was only a stone's throw away from my childhood home.

Here is a quiz. Out of the following 10 landmarks in the map, how many can you recall or associate with? (Warning: Answering the quiz honestly would reveal your age.)

1. Cathay Cinema - The building was opened in 1939 and was Singapore's first skyscraper. It still houses the Cathay Cineplex today.

2. Rex Cinema - Opened in 1946 and still standing today. It has gone through many transformations - was once a skating rink and recently turned into a nightclub.

3. NAAFI Club - Navy, Army and Air Force Institution Club, originally established as Britannia Club in 1951 to serve the social and recreational needs of the members of the British Armed Forces and their allied counterparts. The SAF NCO Club took over the facilities in Mar 1974. SAFE Superstore was located there for a number of years. The Club was renamed in 1994 to the SAF Warrant Officers and Specialists Club. There is ongoing construction of the Circle Line at the site. Hopefully this magnificent and historic building will be preserved: 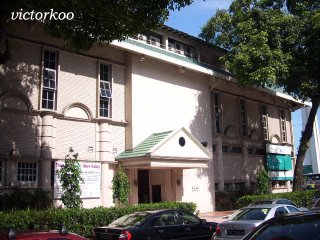 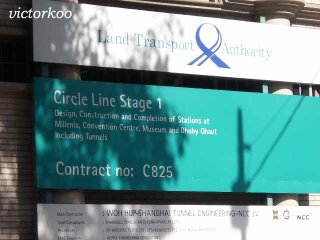 4. Alhambra Cinema - Located on Beach Road together with nearby Marlborough Cinema, it was the first cinema to have air-conditioning. Both the Alhambra and the Marlborough cinemas mark the site where Shaw Tower stands today.

5. Stamford Cafe - Located at the junction of Bras Basah and North Bridge Roads, a popular eating place for the British Armed Forces personnel.

6. New World Amusement Park - In its heyday, it was one of three very popular amusement parks frequented by locals and foreigners alike. In contrast, only the faded arch at entrance still stands today. Behind it, a brand new condominium is taking shape.

7. Combined Police HQ and Mountbatten Club in Bras Basah Road - (No information was available on the Internet.)

10. Tidal swamp bounded by Kallang Road, Lavender Street and Bendemeer Road - Will someone please tell me that I am not seeing things?

I wish to express my sincere appreciation to Mr Peter Tan. This post would not have been possible without his kind contributions.

Details of Singapore's history were obtained from:

I thot New World belonged to Shaw org? How is it related to the British?

My siblings and I have some wonderful memories of this place. Must blog about it some time.

Chun See, have you been speed reading again? I was blogging about the landmarks that appear in the map lah. The map is a British legacy, not the landmarks.

Really ah? New World belonged to Shaw org? I didn't know that. Thanks for the info.

Sorry. So little time, and so many blogs to read ... and write. I asked my youngest daughter what she thought of my blog. Her reply? So many words.

My dad was employee of British Naval Base in Sembawang. He was retrenched when they left.

I wonder whether anybody has some ideas about Singaporean reactions being seen in public dating an "Ang Mo" girl" or dated by those british girls from St. John's Comprehensive School?

I can only recall 6 landmarks. There was a cinema in New World which used to screen cantonese and mandarin movies produced by Shaw Brothers. I also remember a Musical Hall where for a few dollars you could sit at a table, order soft drinks and wateh shows by Malaysain and Singapore artistes - songs, dances and comic sketches.

Peter - Did that ever happen? I mean an Ang Moh girl dating a local man? I almost always see it happening the other way round nowadays.

Frannxis - Welcome back to S'pore. Hope you've had a wonderful time in Hong Kong. You recalled 6 out of 10 landmarks? So you're not so old after all. (Either that or your memory must be failing you, wahaha.) I remember that for a few dollars more, you get to joget with the cabaret girls in the musical hall of the New World Amusement Park. And for yet another few dollars more, you get to 'go all the way'. Not that I've tried either services.

In my time, it seems Singapore school boys were afraid to be seen in the company of ang-mos, though there might have been some strong incentives to know them. A bit of polarization between the locals and expatriate community.

On the other hand, I know that the girls were only too eager to know the local boys. Only boys from Saint Joseph succeeded whilst other schools did not have that kind of success. I still wonder why.

Most of the local boys who were dated by the ang-mo girls didn't have to pay for "2 persons". You see, everybody went Dutch which it now a common practice today in Singapore. Not in those days, the local girls would want the local boys to pick up the tab. A popular place for a show (4pm show time) was at the Orchard or the Lido. If there was a British movie like "Carry On Series" sure can get dates - no problem! However please note, no front stall or back stall tickets but circle seats were preferred - for good reasons...alamak too shy to disclose

Meal was also cheap (no kachang puteh please but coke would do). If you can lagi bowl, you are 1-up already.

However when it comes to discos, the ang-mo girls had "curfew" - even with their own boys, so there's no prejudice toweards Asians. Because their parents were in the military there was some "honour system" practised - be home early, cannot get pregnant, etc.

Thanks for the very insightful information, Peter. So I see that the SJI boys seemed to have all the luck over the RI boys, whose school was also in that vicinity at that time, I remember. First they got to date the Ang Moh girls. Then their school building was preserved as a national monument - now its the S'pore Arts Museum. As you know, RI's building was torn down long ago and had since shifted twice(?) before it ended up at its current location in Bishan.