This post was first inspired by Frannxis' Shanghai trip. Frannxis didn't say explicitly that he was going to Shanghai. Always very secretive, he only said that he was going to an Asian country that was prone to bird flu. At the same time, he posted a photo of Shanghai's city at night. But Frannxis might not be going to Shanghai after all - he once misled me that he owned a certain make of car in the same way... but he didn't.

Secondly, I read Kenny Sia's 'Everiday Shanghai Engrish' yesterday. It was only then that I remembered having taken some similar photos when my family visited Suzhou, Shanghai, Wuxi and Jiangnan in November last year. The educational tour was jointly organised by my elder son's school and its sister school. I put up this post only now because I didn't have a blog then.

We stayed mostly in Great Wall Hotel in Suzhou. I would say that it was a 4-star hotel. This hotel did not lack amenities. With more than 200 participants, including teachers, students, parents and guardians, we were entitled to use this conference hall (which was not designed for small meetings) for most of our activities: 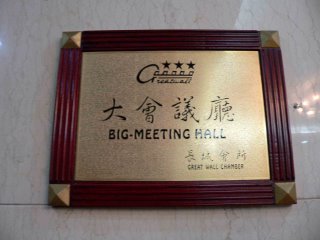 The hotel food was not particularly appetising but it was palatable. The cooks were very generous with the use of lard - our soup usually came with a layer of oil on top and sometimes even chunks of fat pork can be found floating on it. The food was also generally too salty for our liking. Despite these minor irritations, we were very grateful that we weren't served this dish: 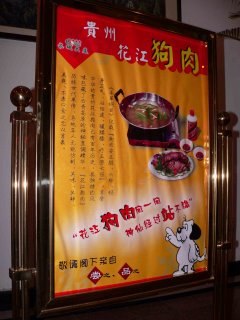 With the Snoopy lookalike cartoon, it should be clear to non-Chinese readers what meat they were peddling. In any case, I will try to do a translation of the key phrases:

The red sentence that the dog is pointing to, says: "Hua Jiang dog's meat - try it once and even immortals who pass by will not be able to stand steadily." What a catchphrase! And I thought that eating this meat will make people (especially men; don't know about immortals) stand steadily.

You think that eating dog meat is cruel? Well, at least the dog was dead long before it was eaten. Not these creatures though, which were found tied up and arranged neatly in a tiny refrigerator with glass panels just next to the dog-dish sign: 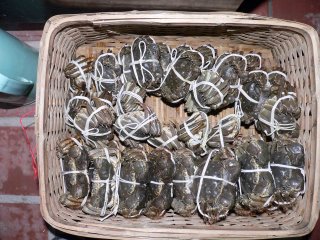 These are called 'Shanghai hairy crabs' and they are freshest if they are slaughtered just before they are cooked. So they may be spending several days alive and tied up in the fridge until someone is willing to part with about S$15 to savour one of them.

Elsewhere, I found several signs using atrocious English. All rules in the book that could be broken were broken - there were typographical errors, spelling errors, translation errors, factual errors, syntax errors, context errors and even 'word order' errors, if there is such a thing. (If there isn't, it has just been invented.) These errors would make the 'BIG-MEETING HALL' sign above seemed very well-written by comparison. This sign was spotted near an old bridge: 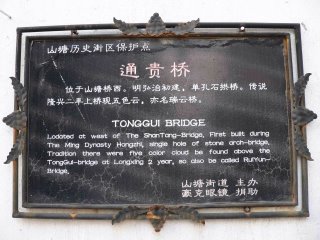 To save you the trouble of straining your eyes in order to have a good laugh, I have transcribed the English portion here, as it appears:

TONGGUI BRIDGE - Lodated at west of The ShanTang-Bridge. First built during The Ming Dynasty Hongzhi, single hole of stone arch-bridge. Tradition there were five color cloud be found above the TongGui-bridge at Longxing 2 year, so also be called RuiYun-Bridge

Hmm... I didn't know that the Ming Dynasty people played golf on a single hole course. And I always thought that clouds came only in 2 colours - black and white.

Here in Singapore and internationally, you often see ambulances with the word ' AMBULANCE' painted on their bonnets as a mirror image: 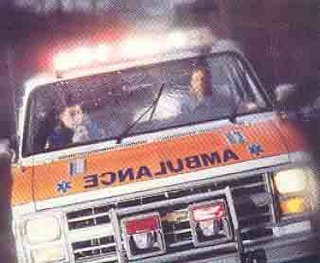 We all know that this is done wilfully so that the drivers in the cars in front of these emergency vehicles who could not see the flashing lights nor hear the noisy sirens could at least read from their rear-view mirrors that there is an ambulance behind them and they are supposed to give way to it. However, a Red Cross vehicle that supplied blood in Suzhou got the words all wrongly painted. It would 'supply blood aid first', no matter what the situation was: 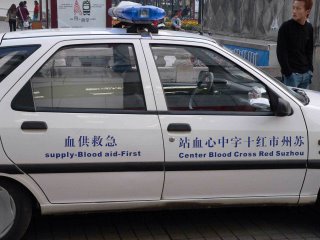 Maybe they wanted to help Malay learners of English understand what they do.

With all the confusing signs and chaotic traffic in Shanghai, I better not cycle in that city even though I am an avid cyclist. Otherwise, my bicycle may just end up like this: 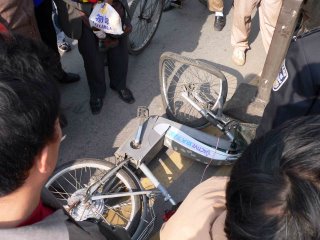 Notice that there were many onlookers but no helpers. To make matters worse, one typical ugly and selfish Singaporean was busy snapping photos for his blog.

Of course I know that some of my blog readers like to see old scenes in Suzhou. So how could my post be complete without some of such photos? These scenes could well be the same as those in Singapore in the 1950's -70's: 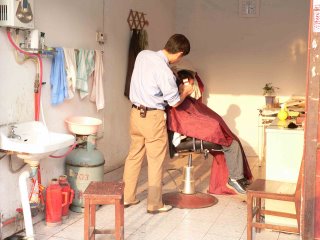 A barber shop in Suzhou. The LPG tank was probably not used for cooking the barber's lunch but for the gas water heater just above the sink. If you wanted a hair wash, you'll probably have to do it in the sink. Daytime temperatures in Suzhou during the month of November can be quite cold - below 10 degree Celsius. 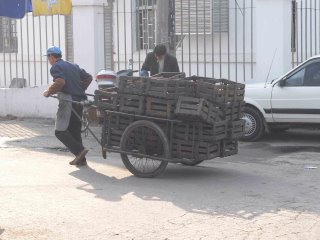 A scene you would probably only have seen in those 'bull cart water' days in Kreta Ayer of Singapore. 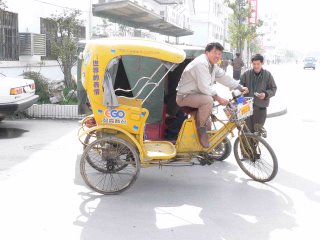 A trishaw rider who was willing to take both locals and tourists alike. 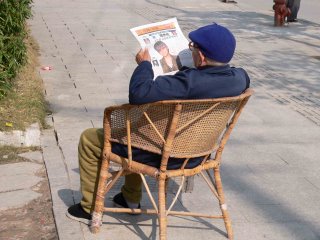 An elderly man sitting in a rattan chair by the pavement, reading his morning papers. 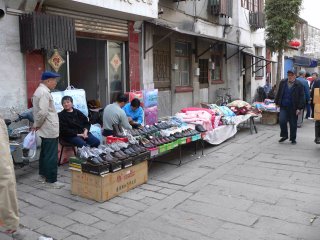 I hope Frannxis will post some of his holiday snapshots when he comes back.

Hi Victor,
I'm on my way to Langkawi for two days of sand, sun and the sea. See, even if I'm on holiday, I still think of you, or rather you blog. Nice entry on shanghai. And I love the way you always inject humour into your life experience.
Till we meet again pal. The internet kiosk is free courtesy of Changi Airport. I've got 8 minutes left! And it's almost time to board the plan.

So observant as usual.

I once saw a unforgetttable sight at a restaurant in Guangzhou. This guy grabbed a 'bundle' of snakes in his left hand at the neck region - they were very thin, grassy looking ones - and then proceeded to snip of their heads with a pair of scissors. Just like people stripping electrical wires.

I went to Hong Kong.

Your roadside snapshots are interesting.

In HK, you see masses of people almost everywhere and they seem to be in a hurry most the time.