A Futile Effort To Win Back A Lost Customer

I have no doubt about what Frannxis said in my last post that when my 24-month MaxOnLine contract was almost up, Starhub would dangle carrots in front of me to make me sign up for another extension. But that will be 2 years from now which is quite a long time and I am not going to worry about it so soon.

I just received a mail from Singnet that looked like an air ticket folder: 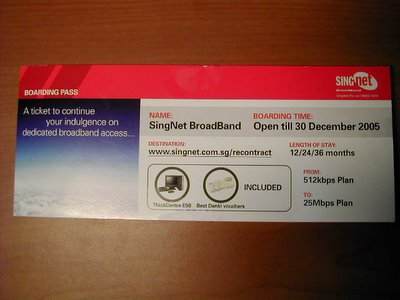 The mail was probably sent out automatically by their tracking system because my 18-month Singnet contract expires on 2 Dec 2005. Singnet probably didn't know that I have terminated the contract with effect from that day because of earlier connection problems. I remember a similar Singnet promotion several weeks earlier which was printed on photos of pizzas. Amused by Singnet's marketing creativity and sense of humour, I opened the folder to find my 'air tickets': 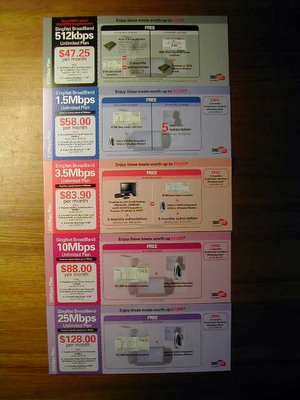 The offers are quite attractive I must say. They range from $150 - $1,400 Best Denki vouchers and/or other freebies, even a free desktop for the 3.5 Mbps package. But I am not so amused by their quality of service and hence I regret to say that they have lost me as a customer forever.

Seventeen months into the contract, I gave notice personally to the Singnet counter staff at Parkway Parade's Hello Shop that I would be terminating the service after the 18-month contract. Initially, the staff had the audacity to insist that I stay with them for 19 months, claiming that the extra month was the 'requisite 1-month notice for termination'. After I stood my ground, he checked with his supervisor. He came back after a while and said, 'Ok, for this special case, we waive the notice as a goodwill.' What goodwill? What impertinence!

If Singnet has made more effort earlier to retain my business, things might have turned out differently. Singtel will suffer too - I am soon terminating my 16-year old fixed line too because Starhub has provided toll-free/subscription-free local incoming/outgoing calls (till Dec 2007) on the voice-enabled cable modem.

As I am typing now, I am already on MaxOnLine 6500. I am impressed by the fuss-free set up, the 'always on' connection and the speed. It can only get better when my Pentium IV 3.06 GHz HT PC which is highly subsidised by Starhub, arrives within the next few weeks.

Frannxis asked me how much faster the MaxOnLine 6500 was, compared to his MaxOnLine 2000. I have experienced both but can't really tell much difference, maybe it's because I am still using my old PC or it may be dependent on the sites that I normally visit. I was told that 6500 would be noticeably faster if you were setting up a home wireless network of 2 or more PCs. I signed up for the 6500 mainly because it was the cheapest package that qualified for the subsidised PC.

Starhub has promotions quite regularly it seems. So the next freebies might come in a few months.

Vic, I will be away on holiday, so won't be able access the internet as I don't have a notebook.

Frannxis, bon voyage. I am looking to your blog about your holiday experience when you come back :). Have a pleasant trip.

Frannxis, I've replied to your query about the speed of MaxOnLine 6500 vs 2000 via an update to the post. Cheers.

phew... i almost wanted to sign up with singnet...

Victor, did u see article by Mr Miyagi in TODAY today? He said some nice things about my blog. Also said I was probably one of the oldest bloggers in Spore. That will probably put you in the top 10 spot then.

Well done Chun See. You shot to fame practically overnight in blogosphere and I am really proud of you. (Your business might improve too because of this, hee.)Seems like my prophesy has come true hor. As for me, I am very paiseh to be proclaimed as amongst the top 10 elderly bloggers instead of being top 10 for having a good blog.

Henceforth, there might be hundreds of comments for each of your posts and it becomes impractical to personally acknowledge or reply each and every one of them. You may even have difficulty picking out my comments from the rest, as 'Victor' is a very common name. Oh, how I long for those good old yesterdays when you would reply to each and everyone of my comments with haste, wit and humour.:)

Today, I missed collecting a copy of the Today newspaper. After you notified me, I quickly visited www.todayonline.com to get a copy (see, I am quite computer-literate and resourceful).

I am so proud of you that I'll try to put a link to the article in my blog so that everyone could read about your achievements.

Yl, thanks for visiting my blog. I guess I was plain unlucky. I have been quite satisfied using Singnet's service since Mar 2001 starting with 56K dial-up, then Jetpack 256K and finally 256K/512K unlimited BB 18 months ago. To be fair to Singnet, the technical glitch I encountered was an isolated incident. It was their handling of the incident that could have been improved upon.

i like your entries as well! will be back for more definitely!

Hi Etel, welcome to my blog. I visited yours too and left my comments there.

Like I said, I blog about anything I like (or dislike). If you check out my latest blog dated 2 Dec 2005, you will find that even at my age, I can be quite cheeky too (not to be mistaken with being 'cheeko' hor). :)

Wow, finaly, after 2 days without PC access, I'm back to say my piece, Victor. Phew!

Still at your Singnet story again, huh? I was a Singnet subscriber before I "jumped ship" to Starhub, all because it was giving away X-Box for a 24-month contract. That was more than a year ago. But it seems the same offer is back.

But I have no bad experience whatsoever with Singnet. On the contrary, the tech dept was always helpful. I also didn't remember having signed any contract with Singet. I converted to broadband from dial-up plan. Competition then wasn't that stiff. So no freebies, if my memory serves.

But you can't deny that Singnet's offer is equally good. They gave away Apples notebook once, and NANO. Of course, I know Apple's products suck but that's besides the point. Apple is really selling a "Life-style". That's why Creative can never catch up with Apple.