Much Ado About Nothing

My elder son has been carrying a handphone for several years now. Initially, I subscribed a postpaid line for him. Gradually, he started to chalk up average monthly bills of $30-$40, even more than the amounts spent by both my wife and I. The reason for the high charges was that he had been using his handphone to read his emails via GPRS. (GPRS charges are based on the amount of data transferred.)

Despite having been reminded several times to cut down on his handphone bill, his behaviour persisted for several months. Finally, I decided that enough was enough. It was time to switch to a prepaid line. I would pay any monthly amount up to the minimum postpaid subscription of $21 while he would use his savings to pay whatever amount that was in excess of that. I figured that this measure could teach him a thing or two about spending money responsibly, especially since he didn't know how to earn any yet. So I subscribed a "Starhub Green Card" line for him.

It was indeed a correct decision - his monthly handphone bill amount never exceeded $10 since then. In fact, I only needed to top up his account once every few months. Just in case his account ran low, I bought a top-up card several months ago. The $18 card was bought from a shop in Marine Parade Central which sold it for only $15. Good deal, I thought. 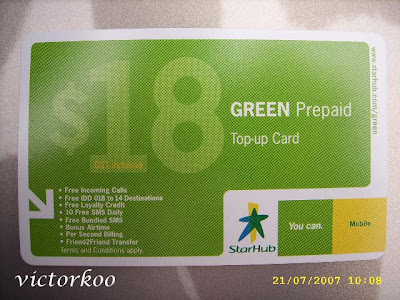 (For those who don't know how topping-up works, the top-up card has 2 secret numbers hidden by a black coating - one is a top-up card number while the other is a PIN number. When you buy the card, make sure that 2 numbers are not visible, otherwise the card may have already been used by someone else and you won't be able use the card again. When you want to top-up your account using the card, you use a coin to scratch away the black coating to reveal the 2 secret numbers. You call 98500000 on the handphone that you want to top-up and follow the voice prompts to key in your top-up card number and PIN number.)

Two weeks ago, I tried topping-up several times but the voice prompts kept saying "Your top-up card number is invalid". My suspicion was aroused, especially since I bought the card at a $3 discount. I immediately called the Customer Care Officer (CSO) at 1633 and asked if there were fake top-up cards being sold in the market. The CSO said that no fake cards had been detected so far. He requested me to bring the card down to any Starhub outlet for further investigation.

As instructed, I went to the Starhub outlet at Tampines Mall. The CSO at the counter took a close look at the card and scratched it again to reveal the mystery of the invalid top-up card number.

Alamak! I was so embarrassed that I didn't know where to hide my face.

That's a good one Victor. I guess it helps to be completely clean when scratching off the debris? Now imagine if this isn't just a prepaid phone card but a chance for a huge lucky draw...

>Now imagine if this isn't just a prepaid phone card but a chance for a huge lucky draw...

Hmm... I haven't thought of that Walter. Well, I guess if such a mistake happens in a huge lucky draw, then banker wins lor.

It is just like the casino game tai sai, if the outcome is a triple number, it is neither considered big nor small. Unless you have placed a bet on the specific triple number, the banker wins all big or small bets.

It is funny. I thought you would be laughing or grinning.

like that must look at big sweep ticket numbers carefully, some print residue could be sticking there, the 8 could turn out be some other digits

Frannxis - Yes, I must learn to laugh at myself more often.

Good values to impart. My youngest is also using a prepaid card. He's very frugal with his usage but already lost his handphone twice so far (second time, he was lucky to have it returned).

hey do you think you should at least not reveal your pin number just in case someone else who reads this entry decides to make use of YOUR prepaid credit? :)

Justcate - Yes that's the other advantage of using a prepaid card. If you lose your phone, no one can chalk up thousands of dollars worth of phone calls for you to pay.

GSH (feel more comfortable addressing you by your nick's initials, heh) - No worries, I have used the card already. So no one can make use of it again.

Hello! how's things and I am wondering where i can get a copy of your book?

Reminds me of those "scratch and win" lucky" draw that always read "Please try again"....:p

I think I own my first hp after I started working....was still using pagers then...hahah :D

Meow - Is Singapore one of your "prowling grounds"? If so, I'll be glad to give you a complimentary copy. Just let me know how. My email address is koo[dot]victor[at]gmail[dot]com.

For some unknown reason, the book is not available at S'pore Philatelic Museum yet. (Hmm... could it be at the Censorship Board because of something I wrote in it? :P)

Moreover, if you get a (uncensored) copy from me, I can autograph it. Just let me know how to address you if you don't want to be called "Meow". :)

Tigerfish - Ah, so you are from the same pager generation as me, hee. Nowadays, handphones are so cheap, I see many primary school children carrying phones that are far newer and better than mine.

It's a very kind offer Victor but you seem to be giving complimentary copies to all and sundry. How are you going to recover even your costs?

Meow - We've got a sponsor for the book so there was no cost on our part to speak of. I was given 50 copies to give to friends and relatives but sadly, I don't have so many. (Alright, I admit that I sold a couple of copies but that was for a charity event, with all proceeds donated.)

I still have some spare copies. The kachang puteh man (traditional nut-seller) here doesn't want them as wrappers for his wares - the pages are too small. And it's so sayang (Malay for "waste") to sell them to the garang guni (rag-and-bone) man.

Hmm... I've got a strange feeling that I know you, Meow. Either that or you seem to be tracking my every action - how many copies of the book I gave out, whether to close friends or just acquaintances.

So do you want the book or not? I can also send you the PDF copy via email (if you don't want your identity to be compromised). :)

yes, i would like to have a copy of the book, thank you.

I think there is no need to feel embarrassed. It was an honest mistake, and the one who paid for it was yourself - the wasted trip etc. In fact, I consider it partly the fault of Starhub for not coming up with a foolproof (sorry - I did not invent this word) design. Plus judging from the CSO's action, I suspect, he or she has encountered this type of problem before.

aiyo, all the trouble and suddenly got to go back malu-ed.

I shall learn from your lesson next time if I have any scratchies :-)