The Singapore Fireworks Celebrations took place at the Marina Bay floating platform on the nights of 17 and 18 Aug 2007. My friend Walter saw it on 17 Aug 2007. (Read his very interesting review here. However, as I was unwilling to pay for couldn't get the $8 tickets, I did not get to see some of the sights which Walter did.) My family watched it on 18 Aug 2007. (My elder son did not join us as he was at a friend's place to do a school project.)

It started with a 10-minute queue into the Raffles City Carpark at about 8 pm. 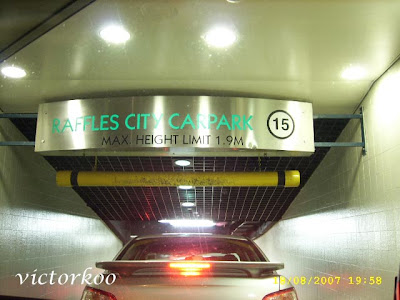 I thought I was very smart by not parking too near to the Esplanade. 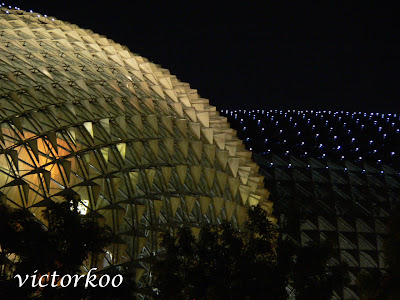 I drove straight down to Basement 3, thinking that I might be able to find a parking lot there. However, after circling the carpark for more than 20 minutes, I failed to find a place to park. Even the illegal parking lots were all taken up. In the end, I had no choice but to exit the carpark. To rub salt into the wound, $2.14 was deducted from my cashcard. Dammit.

I dropped my family off at Empress Place and drove to Bras Basah Complex where I finally found a place to park. Then, it was another 10-minute walk to the Civilian War Memorial near the display area.

Update: Mr Laokokok asked me about the location from which I took the fireworks photos (see comments to this post). As I am not very good at describing a place, I have drawn a map to show the spot (the red-paw mark). As they say, a picture paints a thousand words. 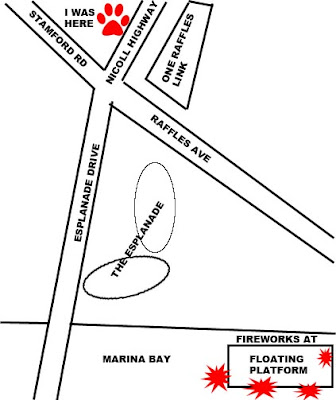 My wife and 10-year-old son were at another place. My son took this photo: 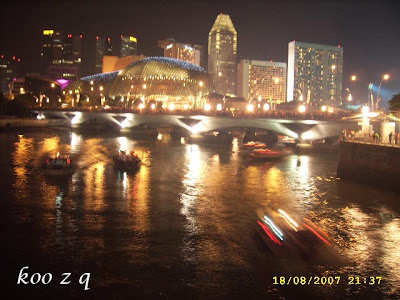 (That wasn't too bad eh, considering the fact that it was a nightshot taken without a camera stand. Like father like son, kekeke.)

When the fireworks started, some cars stopped in the rightmost (fastest) lane of Nicoll Highway to watch it. Some passengers even got out of their cars to gawk at the display! They were later waved on by a very efficient Traffic Policeman on a motorcycle. 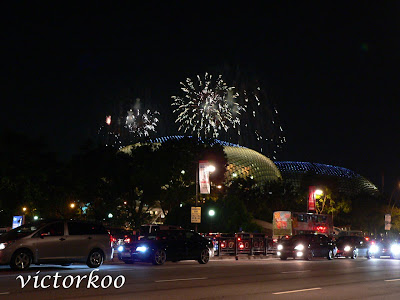 On the way back, I saw someone carrying a camera with stand. He was Mr Kwek Leng Joo, MD of City Developments Limited, who was known to be an avid photographer. I asked if he managed to get some good shots of the fireworks and he replied, "Yes".

Below are some of the better photos that I have taken, although I am quite sure they are no where as good as those of Mr Kwek's. 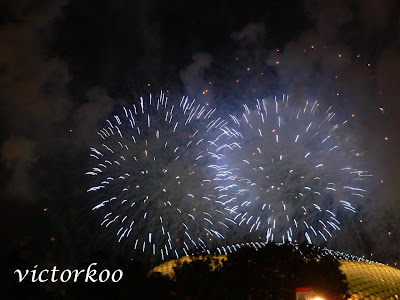 Two Durians On Top Of Another Two 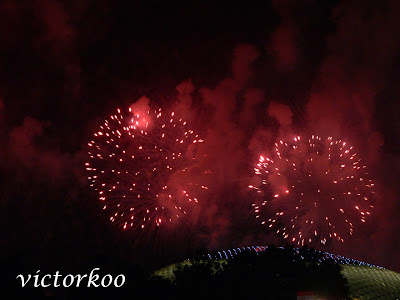 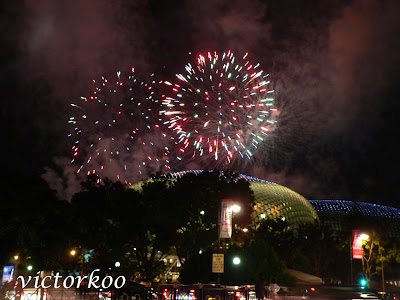 And the above pair is a hybrid of the durian and rambutan. Then come the sea urchins below. 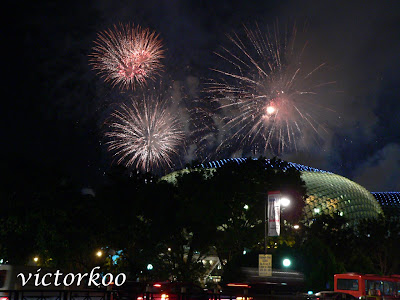 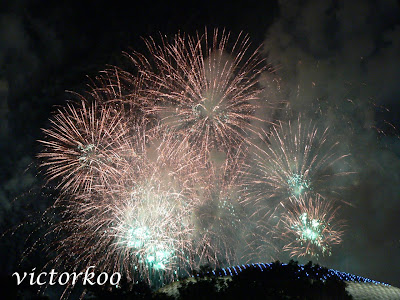 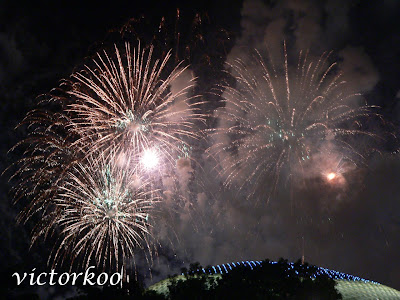 How long did the fireworks last? The only thing I really loved about NDP was the fireworks. I stopped watching the parade ages ago, but would tune in for the last half hour or so just to watch the fireworks.

I was treated to 32 minutes of fireworks at the Venice Redentore Festival on July 14th this year: http://picasaweb.google.com/Patricea
While it is a festival to celebrate the redeemer (http://www.whatsonwhen.com/sisp/index.htm?fx=event&event_id=44944), my husband and I were there with friends mainly for the fireworks!

I also just sent an email to friends saying how I had forgotten that Aug 9 is our national day, until I had to explain our country's history and political system to my friends in Belgium on our first day there during our recent holiday.

Nice photos there of the fireworks Victor. Guess you got inspired by my experience the night before? Hehe...BTW, did you use a tripod? I wanted to bring mine but couldn't find it (grrr) so ended up just point and shoot. Lucky that you managed to catch it despite the carpark hiccups earlier.

Patricea - I didn't really time it but I guess it's definitely less than Venice Redentore Festival's 32-minute display. Maybe it's about 15 minutes.

I took a look at your fireworks photos. Wow, I am impressed! They are very nice and there are so many different patterns. In comparison, ours looked so amateurish.

While I was at it, I also took a peek at the radiant and beautiful bride. Congratulations!

Walter - A tripod is a must when taking photos of night scenery and fireworks. Yes I used one.

One thing that I have learnt is that it is better to use public transport when going to such mass events.

Yes, use public transport. During these events, all the carparks around the area will already be full in the later afternoon.

Fr - I heard that the MRT trains were also packed to capacity.

You must be hungry when you saw the fireworks :P

Hi Victor, so where is the location from which you took those firework photos? My wife keep asking me to go, but I hate the traffic and human congestion...

VL wanted to go there and take photos (just like any other photographer, which I thought are boring =x) but in the end we decided not to. Aiya, should have gone then can see you ... hehe

GD the shots you took are GOOD. The "flowers" are at their bloomest when you took the photos.. teach me some tips to getting a gd photo? :p

Wat u mean not too bad, your son's pictures were pretty good. Got rambutan and durian where is the mangosteen?

Tigerfish, all those physical activities (looking for a carpark, walking and carrying heavy photographic equipment) do make one feel hungry. BTW, the last few photos look like a seafood delicacy aka sea urchins, don't they?

Mr Laokokok, as they say, "a picture paints a thousand words". So for your sake, I have updated the post with a map showing where I was standing. Even for this location, you should be there early as there was quite a crowd gathering at this spot too.

Etel - You really should have gone there with VL. Even if the fireworks were boring, GD is not. :P

There is really no secret to taking "relatively passable" fireworks photos:

2. Activate the shutter using the "2-second delay button" (most modern cameras have this feature) because if you use the shutter release directly, you may inadvertently shake the camera.

3. As Walter mentioned in his post (link provided above), take lots of shots. Flash cards can be re-used countless times so don't have to stinge on using them like what we did with good, old and expensive 35 mm films. According to the Law Of Averages, some of your shots will turn out "relatively passable" even if you are an amateur photographer (which I know VL is not).

Firehorse - No mangosteen but got sea-urchin.

So glad to hear from you again. Er... are you returning to blogging anytime soon?

Hi Victor,
Really appreciate and thank you for that map. I'll archive it and plan for my future trip there if my wife insists.

Were the explosions very loud. I could hear them from here in Bt Timah 6th Ave. Alas, my fear of crowds kept me away.

Ya I think I am semi back to blogging, glad you hopped over, go back and see my response to your comment k *_~

Chun See - The explosions were not very loud. Either that, or I'd better go and get my hearing checked. :P

Firehorse - Yeah, weekend entertainment is back!

Laokokok - You're welcome. Hope to meet you at the Esplanade next year... without your batman's mask. :P

These articles are fantastic; the information you show us is interesting for everybody and is really good written. It’s just great!! Do you want to know something more? Read it...:Great investment opportunity in Costa Rica: hotel in jaco beach, jaco beach review, apartment beach jaco rental. Visit us for more info at: http://www.jaco-bay.com/