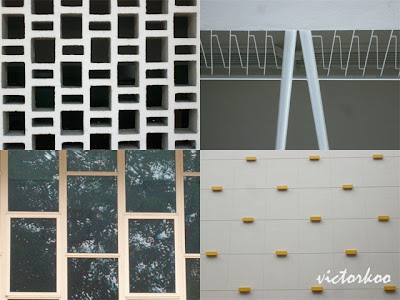 What a disappointment! Despite so many clues given, nobody came up with the correct guess for the last quiz. I am sure that once I reveal the answer, you will be saying to yourself, "Why didn't I think of that?"

Where did these patterns come from?

Not from an old blanket but from Fairfield Methodist Church (花菲卫理公会). This church is located at the junction of Maxwell Road and Tanjong Pagar Road. The building has been conserved. (Owners of conservation buildings cannot demolish the buildings or make major alterations to their structures or facades.)

"Another post-war building approved for conservation is the former Metropole Cinema, otherwise known as Jing Hwa Cinema. Together with the Majestic and the Oriental, Jing Hwa Cinema, built in 1958, was one of Chinatown’s three famous cinemas. Some of you may recall traveling from outlying areas to catch your favourite Chinese movies there. Its successful new life as Fairfield Methodist Church today shows that modern-style buildings can be retained and modified for new use."

The building was built in 1958 as Metropole Theatre (金華大戯院). It was one of three famous cinemas in Chinatown - the other two being Majestic Theatre and Oriental Theatre. In the 1990s, Metrolpole Theatre was converted into Fairfield Methodist Church. 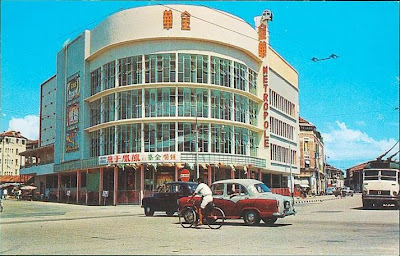 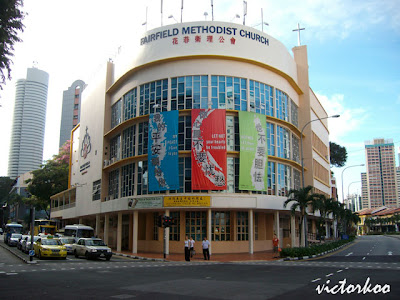 As I mentioned in one of the clues, I took the photos from only one side of the building. As indicated by the red arrows, all the 4 patterns appeared in this photo: 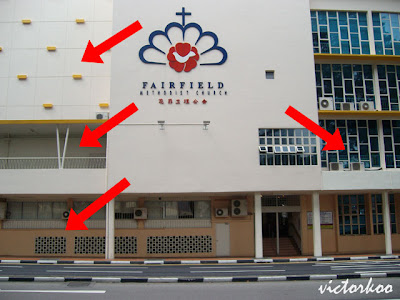 The following description of Metropole Theatre was taken from 4 posters displayed on its ground floor: 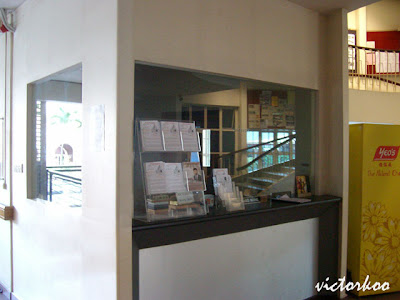 This was the main ticketing booth of Metropole Cinema. Patrons could purchase $1 and $1.50 tickets for seats in the main cinema hall at Level 2. The cheaper $1 seats were in the first few rows. 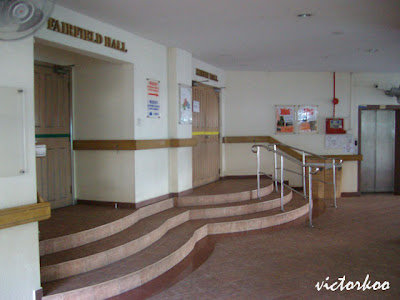 Kuehn Hall [entrance door in the centre of the above photo] was part of the cinema's basement car park. This car park is significant because it is the first basement car park ever constructed in an air-conditioned cinema in Singapore!

The front of Kuehn Hall was the ticketing booth for the more expensive $2 and $2.50 circle seats at Level 4.

At both ticketing booths, cinema goers would choose their seats from a piece of paper that displayed the overall seating arrangement before the seat numbers were manually written on the tickets. 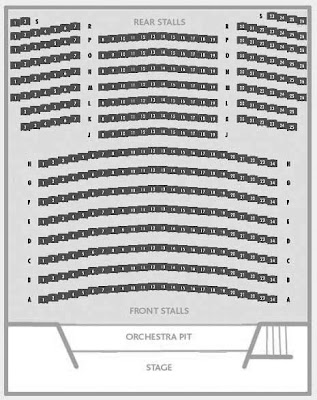 A typical cinema seating plan in those days looked like the one in the above photo. The ticket seller, usually a woman, would cross out with a blue or red colour pencil the seats on the plan for which the tickets have been sold.

To get to the various levels of the cinema, patrons could either use the main spiral staircase... 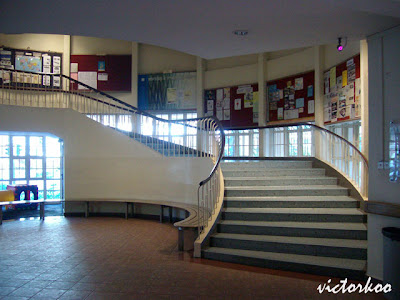 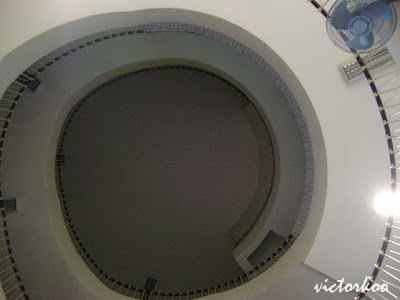 ...or the lift which was manually operated by a dedicated lift operator. (You can see the current lift in one of the photos above.) The lift had a foldable iron gate as the lift door. (Please see this post for a description of a similar cage lift.)

More Recent Photos of the Church 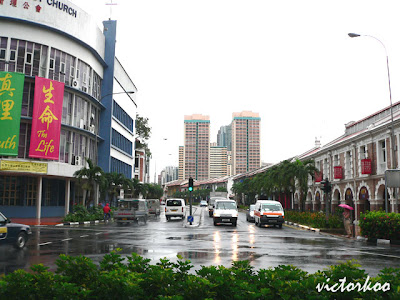 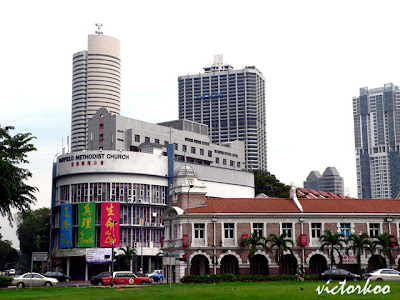 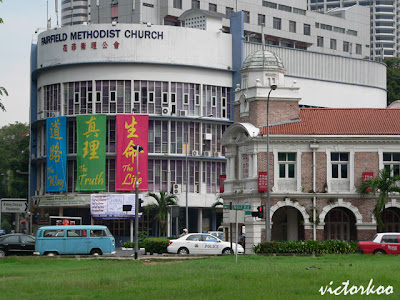 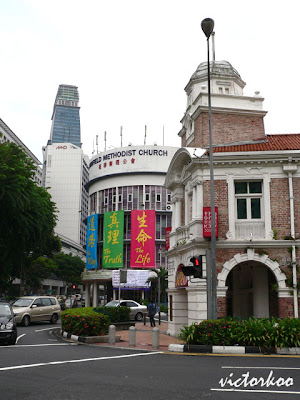 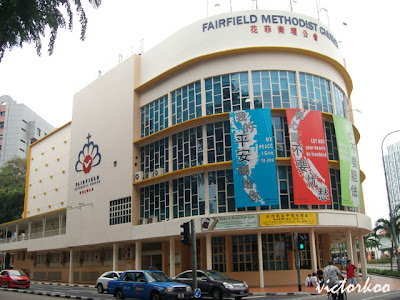 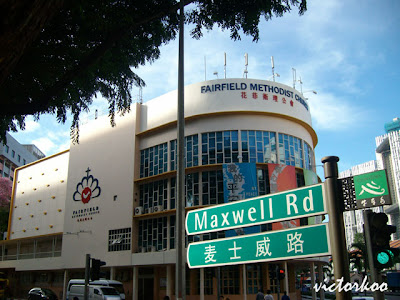 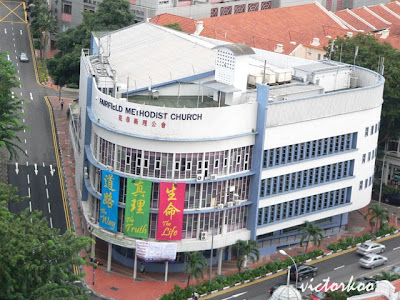 But How Did The Interior of the Cinema Look Like in the 1960s?

All the black-and-white photos below are by courtesy of the National Archives of Singapore: 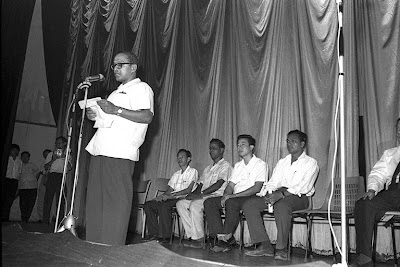 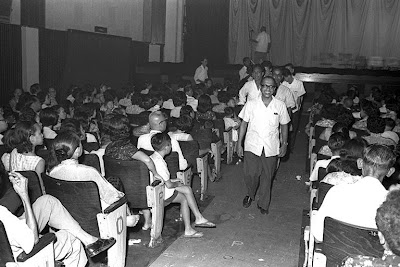 The above photos were taken at a speech by C.V. Devan Nair, Member of Education Advisory Council at the Metropole Theatre in 1964. 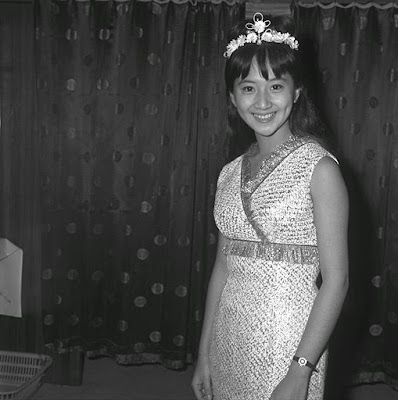 Do you recognise this very famous Cantonese star who made an appearance at the Metropole Theatre in 1967? She was only 16 then. 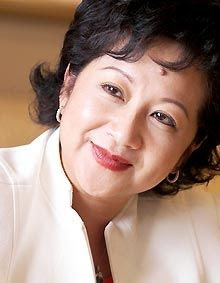 Yes, she is Sit Kar Yin, also known as Nancy Sit. She is still pretty and charming after all these years, just like the Metropole Theatre.

It is too hard for me, would not have thought of that. Didn't know there is this building next to Jinriksha? Building.

Come and think of it, Peter said the quiz not fair 'cos youngsters not born yet. then later he guesses ACM. I think even school children can recognize ACM after class outing lor. so his comment very suspicious hor.

There was ala "Kallang Gaswork" storage tank opposite Murray Street in the ealry 1960s.

If you go to this street Tras Street, there is a 3-storey building where now KTV with China Girls - it was a kindergarten as I saw it then.

We used to get our supply of fresh beef (and tulang for my dogs) from the market opposite the cinema back then.

For several days in the past weeks I have been looking at this building. It is just about 10m from the street opera site in Chinatown.

You know, the day you posted the quiz was the last day of the opera shows. If you had posted this earlier, I might have a very slim chance of guessing correctly.

You are right "Why didn't I think of that?"

I don't think it would have made any difference whether you are an 'oldie' or a 'youngie' as far as this quiz is concerned. Only those who are familiar with this building as it is today would have been able to answer. I htink your quiz was too tough.

Icemoon, as I type this reply there is a documentary on CNA about the Bridge Over River Kwai. Did you watch it?

I think the quiz is difficult because people usually don't pay attention to details. But I thought that the spiral staircase photo should have made it easier.

Nope I did not watch it. Hey how come you always inform me after the show has started. :P

Haha, looks like you don't have a Fairfield Methodist Church member among your readers.

Ahh. And I walked past this building's door the day before my post. Should've looked closer..

Never could have guessed the place. Beautiful pictures and in colour too. And Nancy Sit... So pretty as a teenager. Where did you get her latest picture?
Cheers.

Hi Andy, I got Nancy's latest photo from this link.

Ah ... I wish I had that old photo of Nancy Sit when I blogged about how I saw her whilst on holiday in Penang in 1970 here.

"An interesting thing happened in Penang. At the hotel we stayed in, there was a stir in the evening around dinner time. It turned out that an up-and-coming teenage a-go-go star was also staying (or performing) at the hotel. Some of the girls in our tour group got very excited and wanted her autograph. Can you guess the name of the singer? Answer - Nancy Sit."

you all should revisit Rex Cinema - recently re-opened as a cinema after being put to many other uses like karaoke lounge niteclub or ice skating rink. If I am not wrong, Rex is the LAST stand-alone (i.e. not part of a shopping arcade) old-style one-building cinema left in Singapore still operational.

Foo C M - Good idea! Visit Rex and maybe write a blog article on it, eh? But wait a minute... someone already beat me to it. :(

There was a story bout this cinema.

2 of the seats was permanently "sold out". This was told to me by my parents. Reason given was that it is haunted.

Mentioned that someone once tried to occupy those seats and was interrupted throughout the entire movie.

During my childhood days, my parents brought us to watch a movie there. My brother and I found the spiral staircase very fun and decided to run up the flight to the top level.

But not knowing why, when we were almost to the 2nd highest level, we felt something unpleasant and we ran down faster than usual. I swear we both felt something eerie.

There was a story bout this cinema.

2 of the seats was permanently "sold out". This was told to me by my parents. Reason given was that it is haunted.

Mentioned that someone once tried to occupy those seats and was interrupted throughout the entire movie.

During my childhood days, my parents brought us to watch a movie there. My brother and I found the spiral staircase very fun and decided to run up the flight to the top level.

But not knowing why, when we were almost to the 2nd highest level, we felt something unpleasant and we ran down faster than usual. I swear we both felt something eerie.

Hi Wai Kit, thank you for your comment. I didn't know that the Metropole Theatre was haunted!