I have previously blogged about the ice ball man before, both in my own blog here and in yesterday.sg, here.

I recently bought some old Singapore postcards from Sungei Road and there was one with a very good snapshot of a real ice ball man: 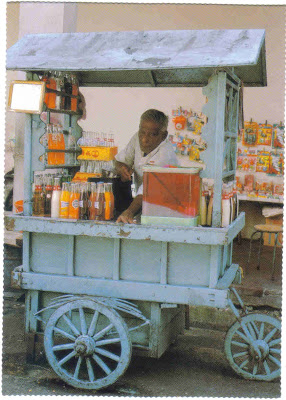 Behind the undated postcard, the words "久式冰水摊" (meaning "old-style drink stall"), "VANISHING HAWKER" and some Japanese words (which I couldn't understand) were printed. The company name LIAN HONG STATIONERY (PTE) LTD was printed as well. (This company is still around today but has since shifted to a new location.) The company address printed on the postcard was "15 Seah St Singapore 0718". Thus the postcard must have been printed some time between 1979 and 1995 because that was the period when Singapore had a 4-digit postal district system.

Notice the big container in front which looks like a modern-day fish tank with no fish but with some sand at its bottom. The transparent red liquid within the container is the drink that I talked about in the earlier article. It is called air selasih in Malay and the 'sand' below looks like frog eggs but they are actually basil seeds. They have a slippery mucous coating after they have been soaked in water for some time. When you bite the seeds, they crunch delightfully.

If you look carefully, you could see the man's right hand resting on something black which I believe is a first generation ice shaver. You might even make out an ice block with a cloth on top of it lying on the ice shaver.

Below are some of my personal observations about the postcard. (Could you come up with some of your own?) -

a. Some of the bottled drinks were Yeo Hiap Seng's chrysanthemum and soya bean; Magnolia's orange; Green Spot (an orange non-carbonated drink); F&N's orange and ice-cream soda; and Pepsi Cola.

b. The stall was mainly made of wood - even the cart wheels;

c. The hawker was an Indian man. Almost all ice ball men then were Indian; and

d. Behind the hawker, along the "five-foot way" was a mama stall. (This is a stall usually manned by one or two Indians selling toys, tidbits, sweets, cigarettes, batteries and other small items. The mama stall still exists in Singapore today and it certainly deserves a separate blog post on its own.)

Recently, I saw some bottled soft drinks still being sold at a modern-day pasar malam (Malay for "night market"). I could tell that the words on some of the bottles were Thai. Hence the drinks should rightfully be called "Thai water" instead of "Holland water", a name by which most Cantonese people called them at that time. (Chun See mentioned about the name "Holland water" in this post.) 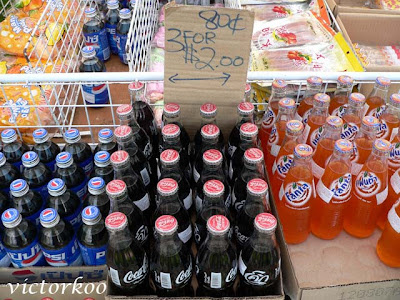 The ice ball man from whom I bought my ice balls in the 1960s was located at the junction of Albert Street and Queen Street. (The location of the stall is indicated by the red box in the photo below. The exact location should be just behind the lorry with the green canvas in the photo, near the lamp post. 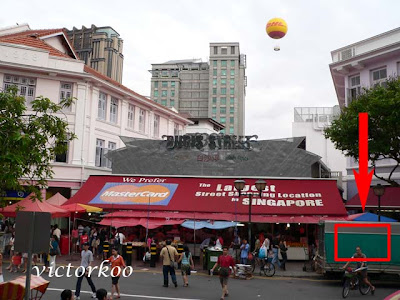 At that time, Albert Street was a bustling pasar malam at night. Every night you could find street peddlars selling all sorts of wares - toys, cassette tapes (no CDs then yet), snacks, clothes, sundry goods, etc. Most of the stalls were lighted by kerosene lamps. Many people thronged the night bazaar after dinner because they did not have a lot of night entertainment then. That was probably the main reason why we had a post war baby boom too, haha.

Now I heard it's Anything or Whatever :P

The 'fish tank' container hasn't changed to this day actually. Many hawkers still use it for drinks like grass jelly and soya bean drink and of course pineapple water.

BTW, is there a mistake in you Chinese character for 'old'. Shouldn't that be: 旧式?

Firehorse - Yes, the modern day equivalent of ice ball that is the ice kacang nowadays also comes with grounded roast peanuts. The bangkuang with shrimp paste and peanuts is a separate dish, am I right? Hmm... wonder how it would taste if they are mixed with ice kacang.

Chun See - Thanks for pointing out the error. Yes, you are right. The character I have used meant "long (time)", of course. That's is the problem when one gets only grade P3 for Chinese at 'O' levels. (Same lousy grade as my literature, which explains my crappy poems, haha).

To further complicate the matter, I don't know how to switch my PC's Chinese input mode to traditional Chinese. (The Chinese on the postcard was in traditional Chinese.) I couldn't find any character that looked similar, so I just took the first character which has the same hanyu pinyin. So paiseh.

hey GD! I love those bottles.. and i miss drinking my soya bean from them too.. hehe..

nice post u've got this time, really brings me memories :)

I remeber we had to pay a 5 cts deposit for the soft drink bottles. I guess the manufacturer reuses them quite a bit becos even some new drinks came in rather worn-out looking bottles.

Not so sure if Sungei Road still as good as in the past now?

Etel - Glad that you like this post and that your nick has changed colour from black to blue again.

Another observation: The cart actually have leaf springs!

Chun See - I visited F&N factory during a student excursion, possibly in the 60s. We were shown all the processes in the manufacture of soft drinks. Almost all processes were mechanised even in those days. Yes, they recycled old bottles many times over. One of the earliest processes was the automated washing of old bottles.

Laokokok - How far 'past' are you referring to? Sungei Road is still much the same now compared to the 1970s as I remember it, except that most of the old pre-war houses around there have been torn down. The empty plots of land there have been fenced up and there is grass overgrowing within them. When you enter this area, you are instantly brought back in time. Better visit again and blog about it because I have a feeling that it may not be there for very long.

Alex G - Oh, are those things near the larger wheel 'leaf springs'? I thought they were just decorations. Thanks for enlightening us.

i was in Bangkok last week, they still have those bottle drinks.

when ordered in restaurants they are 20baht.

i suddenly can remember the taste of the YHS soya milk in the bottle! haha...

Keropok Man - A bottled drink probably costs less than 10 baht in the market. You got ripped off, haha.

I enjoyed reading your blog ~ thanks for posting such useful content.

Anonymous said...
This comment has been removed by a blog administrator.
Thursday, April 10, 2014