After a chance encounter of my primary school post, my ex-classmate Mr Ong emailed me our class photo. In 1968, Mr Ong and I were in Pr 6J of Selegie Integrated School: 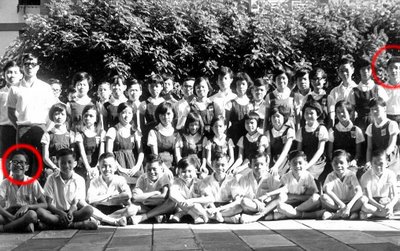 I was the cheeky-looking fellow with the nerdy black spectacles (circled at the bottom-left of the photo) while Mr Ong was the tall handsome boy standing at the right of the back row (circled). Notice that besides the teacher, there were only 4 out of 41 pupils wearing spectacles. (Today, the situation is likely to be the opposite - you will probably find only about 10% of the primary 6 cohort not wearing spectacles and don't forget that those with apparently good eyesight may be wearing contact lenses instead. So in that sense, you can call me the 'pioneering' batch, heh. Another thing you might have noticed is that there were no obese children then - all of us were as skinny as a monkey. Coincidentally, the pupils in our class were born in the Year of the Monkey. If many of us were overweight, you will probably need a wide-angle lens for a shot like this.) I must qualify that I have become more good-looking since my primary school days, especially since I junked my thick glasses after my cataract operations in 1998. Believe it or not, I have changed so much that I nearly couldn't recognise myself in the photo, haha.

Notice also how good-looking our form teacher Mr Teo was. He must have set many pubescent female students' hearts a-flutter. I am sure that some of the 19 girls in my class had secret crushes on him. Good thing that he was as upright a man as the way he stood in the photo.

Actually, after viewing the photo, I realise that I could recall the names of quite a few of my classmates. Some of them even went on to Sec 1 with me in Victoria Secondary School. And I didn't even realise that they were my Pr 6 classmates until now. In my primary school post, I mentioned that Mr Lam C M (seated 4th from left in the front row of the above photo) met me at Hong Lim Food Centre a few years ago and revealed the sad news that at least 3 of our classmates in the above photo had since passed on. I have no wish to guess who they were.

On the other hand, I have no recollection whatsoever of the faces or the names of a few of the boys and most of the girls. This should not be surprising since boys normally mature later then girls hence I took little notice of the girls then. Luckily, I was posted to an all-boys secondary school. If not, I would probably have spent more time ogling at girls instead of studying.

To all my Pr 6 classmates (especially the girls ladies), if you are reading this post, I would be very pleased if you could drop me a comment. Those reading from the nether world are exempted.
Posted by Victor at Sunday, August 13, 2006

aaahh uncle vic, i see that you added the links column and that you've linked me (and the rest). its about time, no? *winks* hehe. take care!

Offside! Evan, say something about my post leh. Don't I look cute when I was a 12-year old? Okay, I admit I looked kind of 'Koo-Koo' then. But I was only living up to my name mah, hehe.

Joking only, as usual. It was really nice of you to drop by to say hello. Trust that you're doing fine too. Ah, the links - I finally learned how to copy the HTML codes from Chun See's blogsite, haha.

You sure looked like "Koo-Koo", Victor. And it's no coincidence that your surname is Koo. Haha. You looked koo-koo but in a cute way. Heh.

And fancy writing stuff like "Those reading from the nether world are exempted". Ooi! It's that month leh. You ah! Always anyhow talk, I mean write one.

Did you get any nicknames when you were in school? I got one which has stuck on me until now; they still tease me

Sure I have a nickname, Peter. But it was given when I started working, not when I was in school. If you pronounce the first 2 words of my name in Cantonese, it means something like 'shylock' in Cantonese. Oops, I've said too much already - I am in real danger of becoming Chun See's next target.

Frannxis, is that how you got your motivation in school? Haha.

You looked cheerful and cheeky. I guess it wasn't long before the letter 'y' turned to 'o'.

OooYyy, ouch that hitting me below the belt.

say something abt the post huh...why shd i? u oso nvr say anything abt my food entries, only commenting in my non-food related ones *bleah* LOL

ya u very cute lah, but now i'm sure even cuter rite :p

And Victor, why oh why must you mentioned "SHYLOCK"? Arrrgghh! Whenever someone (you know who)said that word, I just break into my "poetic" mood. You ah!

Evan, I'm sure you're way cuter than Victor. Show us your photo leh :P

Evan, as they say, "the proof of the pudding is in the eating". How can I comment when I haven't tasted the food yet? All I had were just glorious photos of delicious-looking food which I can't stop salivating at. I still have yet to find out if they really taste as good as they look, especially the popiah.

Chris, go on and compose another poem leh. That's what I want you to do because I enjoy reading them, haha.

Chris, u only know how to ask people to show their photos. I don't see any of yours on yr blog. I trying to picture how Botak Chris looked like.

Chun See, I'm still searching for my best mugshot to upload on my blog. Dun want to look so fierce like someone I know leh. LOL.

But how u know I botak hah?

Hi, I am Toy Him. Do you remember me?

I am working closely with Loh Chee Meng now. Have been visiting Mr Teo almost every year at his home with some regulars:

Hi Toy Him, it was indeed a pleasant surprise to hear from you after 39 years. I heard from Dave Ong that you got married last year. Please accept my heartiest, albeit much-belated congratulations.

I have sent an email with my contact details and some of my nostalgic ramblings to your gmail account.

Hope to hear from you soon.

Interesting..I graduated one year after you. I was in 6E with Mr Choo as my form teacher. Not long ago, I used to see one of our Maths teachers walking at Botanic Gdn every day. An old man but looks very fit. Wonder how old he is.
I wish I could have a reunion with Mr Choo and my primary sch classmates.
One thing I remember was our principal Mr Wee teaching us to sing the national anthem properly..haha

KHP, hmm.... interesting too that you share the same initials with me. You have an amazing memory - you still can remember your teachers' surnames. I can't.

>I wish I could have a reunion with Mr Choo and my primary sch classmates.

I have a suggestion. Like what I have done, start a blog and upload some old class photos in it. Then sit back and wait. I have made contact with a classmate I have not seen in 40 years this way.

Hi Victor,Thanks for the compliment. It is actually not difficult to remember a good teacher who was nice to us, and could teach so well.
I may take up your suggestion. I can't believe that I have not seen any of my classmates although Spore is so small.

Hi khp, you might have actually met your primary school classmates before but both parties would have difficulty recognising each other. A great deal of physical changes could have happened in more than 30 years. (Read this post about how a former pr sch classmate recognised me but I couldn't recognised him.)

Please keep me informed if you set up a blog.

I was googling Selegie School to see what I could find about the school where my parents used to teach and I found your post. My parents (Chng Peng Ton, Margaret Sim) taught at Selegie Integrated School in the 1960s and 3 of my father's brothers were students there at the same time.

Fuzzoo, thanks for visiting my blog and leaving a comment. I have seen your nick before in Chun See's blog before. (Chun See is someone I got to know quite well from blogging.)

During my time (1963-1968) in Selegie Integrated School, I don't recall being taught by your parents. Or maybe I could have forgotten their names. I could only remember my Pr 5 form teacher was a certain "Mr Koh" and my Pr 6 form teacher was Mr Teo Keng Koon.

Hi Victor. My mum's name was Margaret Nancy Sim (I think maybe she used Nancy more). She taught at Selegie from 1963-1968 and my dad taught there from 1964-1967. And they lived next door at Selegie House. My mum's best friend at Selegie School was this teacher called Ms Chao who is the sister of Prof Chao the famous pathologist. I am piecing together my parents' life stories with help from my dad who has an elephant memory but whom I can't persuade to start a blog like yours and Chun See's. It's just nice to see some people who might have a connection with my parents' past.

Fuzzoo, as it was more than 40 years ago, I can't remember who were my teachers other than the following form teachers:

Maybe you could ask your parents whether they taught any of the above classes? (Unless they kept a record, I doubt they could remember either.)

I had a very good friend/classmate Mr Lim G L who stayed in Selegie House. I remember visiting him a few times after school. I heard he is a doctor now.