I Should Be So Lucky 2

You can say that I unabashedly got the inspiration for the title of this post from Chris' I Should Be So Lucky post and Jack Neo's latest blockbuster movie, I Not Stupid 2, for which Chris also wrote a post about here.

Talking about Jack Neo's films, those of you who have watched his 2004 film, The Best Bet, will probably recall the following hilarious scenes in which God(s) Of Wealth appeared: 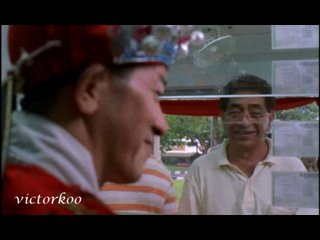 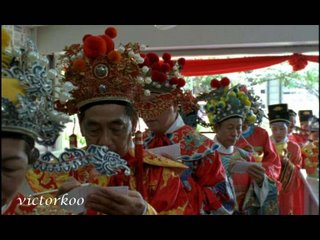 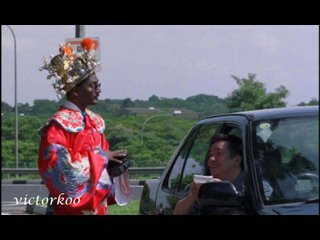 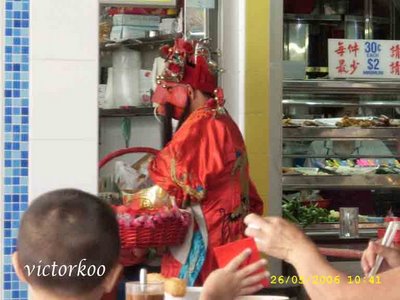 (Boy, am I confused. And if my convulated words here are considered blasphemous to anyone, I am sorry. Since I also happen to believe in "sorry also must explain" for some sorry cases, let me explain.)

Although I was confused, there was definitely no mistaken identity - this God Of Wealth was no God Of Health for he walked with a noticeable limp. He looked like he just walked out from a Mediacorp movie shoot. He had his face painted red and was in a full red outfit complete with matching headgear. He was carrying a basket. Inside the basket were not flowers but angpows (red packets) which I believe contained lucky 4D numbers. Not 4D tickets, mind you, but 4D numbers. (I think it is illegal to resell 4D tickets for a profit in Singapore, even if the seller had obtained the original tickets from a legal source.) For the benefit of people like Chun See, who don't buy 4D, the 4D numbers are usually written or printed on pieces of paper and they merely offer dubious tips on what are the 'lucky' 4D numbers to buy. Of course, the Law Of Averages still work here - for every 10,000 4D numbers which the God Of Wealth sells, on the average, one is likely to hit the first prize, another the 2nd, another the 3rd and so on. So these few lucky people think that the God Of Wealth is really God.

He approached stall holders and customers alike. A few people who believed in him in their luck actually bought the angpows from him. (Notice the angpow in the little boy's right hand.)

I think that God Of Wealth was selling the 4D-number angpows for a minimum of S$2 each. I say 'minimum' because you are always welcome to give more. When it comes to donating to Immortals, no amount is too much. Whatever amount you give in excess of S$2 will be readily accepted. You will notice that the loudness of the 'thank you' coming your way is directly proportional to the amount that you have donated.

I didn't buy any 4D number from that man God Of Wealth mainly because I don't believe in him that I can be that lucky. Besides, I have no lack of 4D numbers to buy. There are already so many that I just can't keep up with - numbers coming from flat units, HDB blocks, car registrations, birth dates, identity cards, handphones, receipts, etc of people like family, relatives, friends, colleagues, ex-girlfriends, mistresses, and so on.
Posted by Victor at Monday, May 29, 2006

Lucky you, Victor, fancy meeting the God of Wealth. This smacks of "exploitation". People would do anything just to get your money. I think it's illegal even if he's just selling 4D numbers. Book him Dano.

Friend, I know what is 4D. I used to buy when I first started work. Even won a small amount when I bought my first car. But I stopped after I became a Christian. I realized that God has already blessed me with everything I need to be happy on this earth. Whatever else I need, He will provide. FYI, I don't even buy shares.

In fact, I also know what is chap-ji-ki. I intend to blog about it sometime.

did u see the ST article about Dr Cheong's speech in Adelaide U? He wants them to be contrarian.

Oh really? Did it appear in today's ST? I didn't know that my philosophy is now taught in the University.