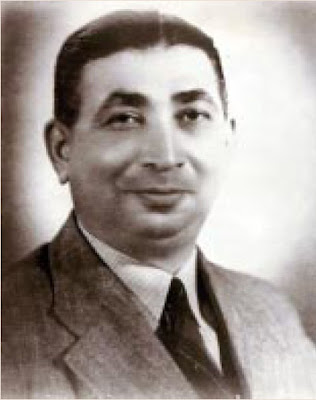 Phoenix Aerated Waters was started by Mr Navroji R. Mistri in 1925. Mistri was trained as an engineer. From 1913-1923, he was working in a fellow Parsi's company Framroz Aerated Waters as a manager. Relation between Mistri and Framroz soured as the former had signed an undertaking not to start a similar business after leaving Framroz. The matter was brought to court which ruled in Mistri's favour.

Mistri was also a philanthropist. In 1952, he donated a princely sum of $950,000 to the government. The money went towards the erection of a 4-storey building for sick children in Singapore General Hospital which was named Mistri Wing in his honour. Sadly, Mistri passed away a year later. Today, the Mistri Wing houses the National Heart Centre.

Phoenix Advertisements in the Newspapers:

However, the most classic advertisment of all must be this one from a Chinese newspaper dated 10 Mar 1926: 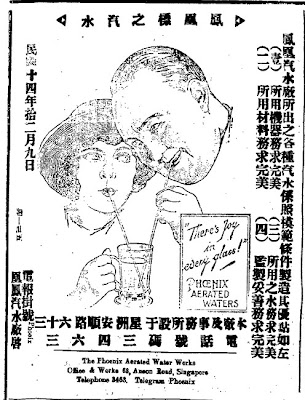 The following information is revealed in the last advertisement of Phoenix Aerated Water Works:

1. Its tagline was "There's joy in every glass!"

And the piece de resistance is a kind contribution by "Anony-mouse" - a 1957 photo of him sitting on stacked-up crates of Phoenix bottles: 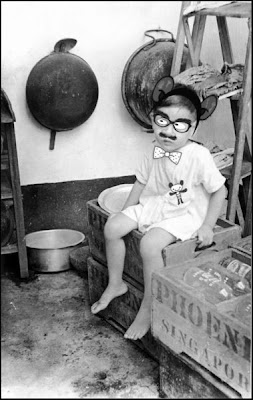 Hmm... how come I've never played with such a cute face mask when I was a kid?

And they certainly don't make such strong glass bottles anymore!

2. National Heritage Board (NHB) publication Flame of the Faith - An Insight into the Parsi Zoroastrian Tradition.

5. The Parsi Community in Singapore
Posted by Victor at Monday, October 26, 2009

I am making a guess because of the 2 -clour wall - was that background in the Tiong Bharu Estate area, on the ground floor backyard?

Peter, the last photo was taken in the vicinity of Serangoon Road.

Those times, we did not use latex paint to paint the walls. We whitewashed them with 'kapur' or slaked lime mixture. This whitewash was impermanent, in the sense, it peeled easily from the walls.
For the bottom part, we used a kind of coal tar, brownish black in colour. It has waterproof qualities but was sticky.

The slaked lime is similar to the 'kapur sireh' used for chewing with betel nuts, gambir and tobacco leaves. During those times, the roads and pavements were dotted with red spittle from the 'kapur sireh' chewers.

The Mistri Wing at the Singapore General Hospital will soon regain its status as a children's wing of the hospital since there were objections by the family about its use as a heart centre.
If gossip is reliable, a new heart centre will soon be in place near the present one.

Andy, thank you for the information. I didn't know about that.

Unknown said...
This comment has been removed by the author.
Wednesday, October 28, 2009

Victor, your 2 articles about aerated water really interesting. Must bookmark for further reading when the school exam is over.

Thanks LKK. What exam are you taking? :p

Slack lime - now I am remembering something. Was that a kind of white clayish paste stored in a wooden upright rectangular crate? I think I might have seen it before. You took some clay and mix with water and then start painting. Am I correct?

What about the bottom paint? How was it stored?

Pete, yes you are correct.

My grandma would engage a painting contractor to whitewash the house.
They would mix the whitewash in our backyard. My grandma would keep the remainder of the unutilized slaked lime. I have an old photo, taken in 1956, of my elder brother and part of the wooden upright crate is visible therein. I will crop the photo, to show only the crate, and will email it to Vic. He can then either email the photo to you or post it, somewhere in his blog.

After a day or two, when the whitewashed walls have dried, the contractor will paint the borders or bottom portion with the tar-like paint. I cannot remember exactly where he keeps it but I believe, in tin containers.

You mention that the bottom part is tar-like and used for the bitumen road. Can you remember whether the contractor needed to heat the "black tar" block until it turns into liquid form? I am trying hard to remember because we used to have this kind of 2 -colour walls in the backyard of my grandparents' flat.

hey so who made the cute mask for anonymouse? didn't know he is another oldie. :P

Sorry, I cannot recall whether the contractor required to heat the 'black tar' to turn it into liquid form. All I recollect was when the whitewash walls dried, after a day or two, he would bring a big can of the paint, stir it, and apply it on the lower portion of the walls.

Perhaps, someone in the paint business or who has knowledge of this, can help.

Icemoon, you mean the mask came from the Photoshop and not the mama shop? Hmm... I don't know. Anonymouse?

Icemoon, What mask? There is no mask. A mouse, by nature, is born without a mask. Wait until you see me in a human-like mask. Eek, eek, eek!

I acme across a 1934 street map which shows the Phoenix Aerated Water factory at the corner of Maxwell Road and Cecil Street.

I am writing a book on the Parsi community of Singapore to which Mistri (Phoenix) and Framroze belong... and I am truly enjoying reading these anecdotes about these two drink manufacturers...
anybody has a tincture of the bottle by Phoenix - Ornage Pop or Vimto?