What Kind Of Insect Is This?

No, I am not scolding the people involved in the recent illegal kidney transplant fiasco. Neither am I admonishing the alleged 26-year-old killer of the aged transvestite nor the wife of the Slipperman who was alleged to have fatally knifed her brother-in-law and critically injured his wife during a violent argument. I am referring to a real insect.

Today in the New Paper, there is a feature on Mt Pleasant colonial bungalows which are popular among expatriates. One British national who has been living in there for two years remarked， "I absolutely love it - the space, the house, the garden and especially the wildlife... This place is close to nature; we get monkeys, monitor lizards, skinks (small, shiny lizards) and even snakes here, and it's lovely."

I guess there must have been insects as well. This monstrous one was found dead in Peter Chan's house, although Peter lived no where near Mt Pleasant: 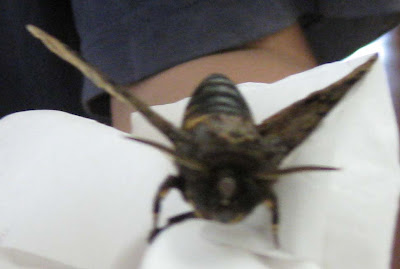 Peter found it dead inside the house during the day. It must have come in through the window because it was found below it. The insect's body was about 2-inch long while its wing-span was about 4-inch. It had a huge thorax, at least half-inch in height and its backside had yellow stripes on black.

Do you know what insect is this? This is a quiz for which I don't know the answer. I must confess that I have never seen anything like this before, not even in Sentosa Butterfly Park and Insect Kingdom. Maybe my entomology-trained friends Walter and Sivasothi can? Hurry, identify it before someone else does!
Posted by Victor at Sunday, June 29, 2008

may be a hornet - a large wasp

Peter, are you tuning in?

please lah dont frighten me. Wasp? I must find the nest now. actually talking about pest, have u found a way how to "chase away" those manors and crows when they come into your house? I found a unique way but I think many naturlaists and "SPCA-type" will dislike me. BUT this is effective considering that many corws and manors often invade our left-overs in hawker centers. Not hygenic in a way if you allow these birds to continue.

At yesterday's FOYers' gathering, Walter said that it could be a moth. Hmm... now don't tell me both Chun See and you don't know how a moth looks like? Haha. (Didn't I tell you to take more photos of the insect from different angles?)

You mean the mynahs that came into your manor? ;)

Shoot them with lastik ah? :p