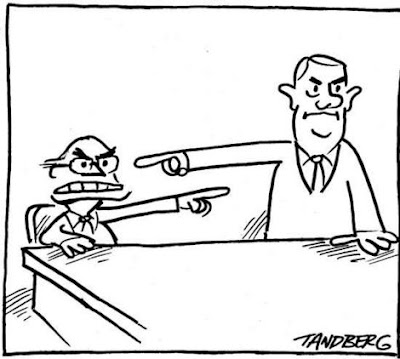 Like it or not, whenever something goes wrong that affects the public, the government often ends up getting the blame. When Mas Selamat escaped, some people called for the Minister for Home Affairs to take responsibility and step down.

The LTA (Land Transport Authority) is another government agency that is often blamed when accidents happen. When the trailer transporting concrete slabs skidded, fell on its side and blocked all 4 lanes of the PIE, some people felt that LTA should not allow such heavy vehicles on the expressways during busy hours. Some even thought that heavy vehicles should be banned from using the expressways at all times.

When the driver stopped his car abruptly in the fast lane of the CTE to insert his cash card thereby causing a motorcyclist to collide into another car, he thought that he was totally blameless! He didn't say this but while grinning in court, he must be thinking that if the LTA didn't erect a ERP gantry there, the accident wouldn't have happened at all. And why fine him only $200 if he had committed a serious offence?

When 8-year-old Russell Koh died after being flung out of the mini-van taking him to school, it was because LTA didn't heed earlier calls for safety belts to be installed in all school buses. And so the blame game goes on.

Some ask accusingly, "Why does the government always have to wait for something tragic to happen before it does something?" Yet when the LTA recently banned taxis from stopping anywhere else except at taxi stands in the CBD, the public asked if there was any precedence of accidents caused by taxis not stopping at taxi stands. The LTA was also accused of being insensitive to the needs of the elderly and the disabled people.

But if the government doesn't take the blame, then who does? After all, the government runs the country and therefore it is reasonable to assume that it is ultimately responsible for all the flaws in its systems as well as in the civil servants who run the systems. Of course, it is understandable that systemic and human failures do happen every now and then, and not all of them are preventable or even foreseeable.

Having said that, in the case of Mas Selamat's escape, it is sad that nobody saw the whole picture except Mas himself. He certainly made very good use of all the systemic and human weaknesses for his very dramatic and successful escape. It all looked very complicated but it was actually very simple.

The WRDC superintendent probably thought that window grilles were not crucial because the area outside the window was still a guarded area. But why install doors to the toilet cubicles at all when the guards were supposed have line-of-sight of the prisoners at all times? Oh, so the toilet was supposed to be used by visitors and hence toilet doors must be in place? Okay, then don't allow prisoners to use that toilet for heaven's sake! Make them wear diapers if you can't construct another toilet for them.

Also, why put a female officer in the team that guards a dangerous male prisoner? Not enough MANpower? Afraid that prisoners get MANhandled? Lame excuses.

Finally, why was the old CCTV system switched off when the new ones weren't even operational yet? We all know that for any crucial system, there should always be a parallel run to ensure continuity. For goodness sake, if it is not already done, please remember to install motion detectors as well, if there is not going to be anyone watching the CCTV monitors 24x7. And don't forget to link the motion detectors to a very loud alarm system. Test the systems regularly to ensure that they are working. Have exercises and dry-runs frequently to make sure that procedures and processes run smoothly when required.
Posted by Victor at Thursday, May 01, 2008

CCTV turned off? Dont think so. I think they purchased a CCTV that has no recording facility. Like someone found out when there were a number of people committing suicide at MRT Stations. Someone better ask how th tender specifications were first designed. I remembered that MRT officials said that during tender, it was found to be very expensive to have recording facility.

I believe some red light cameras also are dummies. Only certain areas the cameras are working. This I am sure because I approached one of the technicians who are responsible for traffic camera management. Anyway this project also out-sourced.