I have been rather busy lately and have not been actively blogging. Read on and you'll know why.

Two years ago, I signed up with Starhub's MaxOnLine (a local ISP). At the same time, I also installed home wireless networking. This required the connection of a wireless broadband router which sat between the modem and one of my PCs. (The PC was connected to the router by a cable. However, if I like, I could also choose to go completely wireless, i.e. all PCs connecting wirelessly.) 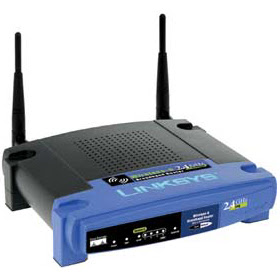 For some service packages, the Linksys WRT54G router (photo above) was bundled as a "free gift" by MaxOnLine at that time. However, I had to buy my own router as I was already given a "nearly free" desktop PC. I decided to buy the same model of router because I thought it would be the most suitable one for MaxOnLine. Otherwise Starhub wouldn't have bundled it, right?

After some trial and error (more of the latter than the former) I eventually managed to set up wireless networking successfully. Don't pray pray, okay? I even secured my network with 128-bit WEP (Wireless Encryption Protocol) although I might not know exactly how it worked.

Ever since then, I consistently experienced difficulty in loading some websites regardless of which PC I used. Some of the problematic websites were:

2. Blogsites hosted by Wordpress. (That explains why I didn't visit Wee Kiat's and Laokokok's blog as often as I would have liked to);

Oddly though, I had no problem accessing other websites. For example, my Gmail account was alright. Blogs hosted by Blogspot could also be displayed normally.

I recently got a "nearly free" laptop when I recontracted my MaxOnLine subscription for another 28 months. I also bought a new Compaq Quad-processor desktop. Immediately after setting up the laptop and desktop, I tried accessing the problematic websites. Yes, the problem was still there so it could not be due to viruses, spyware or a slow PC.

So I decided to call the MaxOnLine hotline 1633 for advice. The automated answering system said something like this:

"If you are calling us because of a problem connecting to the Internet via a router, try connecting directly to the cable modem, by-passing the router. Power off and on the modem and try again. If you could access the Internet this way, then the problem could be due to your router. You may want to contact the router's vendor for further technical assistance."

Following the instructions, I tried again. Indeed, the problem went away. So it must be the fault of the router.

I googled for more information on the router and found this very useful Linksys Customer Help Site. After searching further, I arrived at this relevant page.

I tried adjusting the security setting of the browser and the MTU values for the problematic websites as well as opening the port for secured websites but all to no avail.

At the bottom of the page, it said that if all the above didn't work, I should upgrade the firmware of the router. That I did and voila, the problem was solved!
Posted by Victor at Tuesday, January 29, 2008

Thanks for info, I've been experiencing the same thing.

Can be worthwhile checking for firmware updates from time to time Victor. You sometimes see them on MS Update as well if you select the Custom update instead of express. I run the MS update this way about once a month in addition to the automatic updates that I have set for express updates.

I read your post, "yat tau moe soi" (Cantonese for foggy). I also have a Linksys router with my MaxOnline account. This one can accept both line and wireless connection. So we connect desktops to the line and the laptops to the wireless. So far no problem.

Kopi Soh - Glad that you find my post useful. So are you going to try upgrading your router's firmware anytime soon?

Jollygreenp - Will take note of your advice and check for driver updates more frequently in the future. I do have automatic "Windows Update" and "Hewlett Packard software and hardware update" switched on but they have not prompted me for any hardware driver updates so far.

Actually I do feel rather reluctant to actively update or upgrade anything when everything is working fine. But when something is obviously not working, I will try all means to get it solved.

My wireless router also can accept up to 4 PC connections via cable as there are 4 LAN ports at the back.

If everything is working fine, I will also not do anything.

BTW, do you know that you can share files and printers on your network? That is, if you share your files, you can see say PC A's files from PC B. That way, you don't have to use a thumbdrive to transfer files between your PCs. Very convenient.

If you share printers, you can work with only one printer and send your printing wirelessly.

For YouTube videos, my experience is that it is usually quite smooth in the morning whereas it is very slow at night.

Fr - That is probably a bandwidth problem and not a technical issue. Maybe a lot of people in your block have to go to work or school in the morning and could only use the Internet at night, thereby causing congestion and slow response time over the shared connection.

so does it mean that u can go into flickr easily already GD?

I dont think you guys shoudl do anything except to lobby against Starhub. I faced the same problem bu the moment Starhub etchnicains came to my place and install Starhub's latest cable modem, woh the speed average 8mbps although the new model could run as fasr as 100 mbp[s.

our old model seems to be max 10 mpbs but averages 3 mbps. The problem arose because when Starhub decided to introduce 8mbps service to subscribers, they forgot to advise customers of the old cable modem that they should upgrade. So the problem is not due to your router cos I also use the same model. Somewhere there is a "breakdown" between the old cable modem and the new faster broadband speed.

When I enquired how do I get my hands on the new cable modem, they said 1) subscribe to the new 18 months service, get a reduction in your monthly Internet bill and get free cable modem. BUT there is a catch. if you call t0 1633 you pay additional installation charge but if you walk down to service centers you DIY. 2) Buy from service service at $99++ and DIY

U see the markeitng ploy of Starhub? I would have thought that when they upgraded the braodband transmission speed they should have advise the customers. No wonder my system slowed down for 21 weeks in January 2008 which also coincided with a general disruption of service as reported by IDA.

If u wanna tlak to 1633 sales people, dont waste them. You talk one thing they talk about something else. they not interested to hear your complaints.

GNE - Yes, seems like no problem accessing Flickr and Photobucket now. But problem is no time. (Alright, actually I am lazy. :p)

Peter - I actually tested out my 2-year old modem first. (I have explained how to do it in the article.). My modem was found to be in good working order. In my case, it was definitely the router's obsolete firmware that caused the slow connection.

If your modem has both USB and ethernet connections, I suggest that you use the later as it is capable of faster data transfer - ethernet could transmit/receive up to 100 Mbps (some even 1000 Mbps) while USB could only manage 12 Mbps. I think it is no problem at all for the modem to handle 12 Mbps which is the speed which my MaxOnLine Ultimate plan is supposed to operate at. (Previously, Starhub provided a "download speed test" on its website. I can't find it now. Otherwise you can test how fast your download speed is.)

I am using a Motorola voice-enabled "surfboard" modem model no. SBV4200 which I find to be quite reliable. Someone is selling the same model very cheaply on Yahoo Auctions. The current bid is only about $10. Please see this link. If you need a modem, may I suggest that you try bidding for it.

Hi Victor,
Thanks for bringing this issue up. Didn't know about this problem until now. So updating of firmware is rather important.