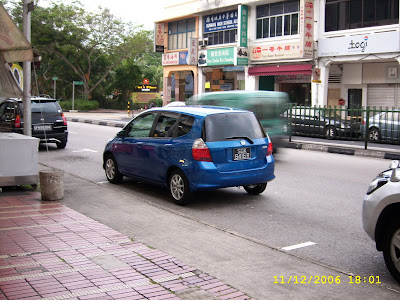 This article is written as a timely response to Chun See's post yesterday about disgraceful Singaporeans.

Yesterday, I was at East Coast Road for dinner with my family. I was looking for a hard-to-find parking lot when what I saw next made me flew into a rage - I saw this car parked at the roadside occupying two parking lots. The car was parked this way for at least half an hour. When the idiot driver came back for his car, I saw that it he was a man.

I have just submitted the photo to parkingidiots.blogspot.com with the following accompanying text:

This Fit driver is not fit to park!

His car (reg. no. SGK8416R) was caught on 11 Dec 2006 at about 6 pm along East Coast Road. His car was occupying two lots in East Coast Road where there is usually a shortage of parking lots especially during dinner time. He was parked there like this for at least half an hour. Meanwhile many car drivers like me slowed down while driving by, thinking that there was a space to park but moved away after realizing that this inconsiderate idiot had occupied two lots.

I hope that parkingidiots.blogspot.com will publish my entry. Through this "blogo-community policing", especially for matters falling outside the jurisdiction of the blogo-policeman, I hope that Singaporean drivers will gradually be educated not only to drive safely but also to park considerately. It is a slow process but with the power and the reach of the Internet, I believe it can be done. Singaporeans will be more graceful with some effort - our combined effort, that is.
Posted by Victor at Tuesday, December 12, 2006

Sometimes, I worry that people get condemned unfairly as a 'parking idiot'. For example, if the previous driver next to you did not park properly, so you are forced to also park off position. After that the guy leaves, and somebody comes along and snap a photo of your car and you kena 'sarboed'.

So in mitigation, the defence lawyer is suggesting that the defendant could have been a victim of circumstances? Okay, let's examine the testimony.

For a parked car to occupy 2 lots because of circumstances, there must be two adjacent cars doing the same. And not only the same, the wayward parking must be wrong to the same degree as well. Even if only one of the adjacent cars had parked improperly, the defendant still had a way to park properly, i.e. next to the nicely parked car. Now what is the chance of 2 cars being parked improperly in a similar manner? Not entirely impossible but quite unlikely.

Even if the nearly impossible scenario did occur, the defendant was still guilty of abetting and perpectuating an offense. Hence I feel strongly that the defendant is guilty as charged.

What Chun See wrote actually made sense. Blessed is he who gives people the benefits of doubt.

Not that I'm siding Chun See, Victor. You blew your chance of knowing the truth when you lacked the conviction to confront that man as he left in his car. What's the point of complaining and posting it to parkingidiot when telling the man off to his face would have been more effective?

Sorry, tot you've bola as big as coconuts. I was wrong. Sigh.

I think that my coconuts are still fairly big, unlike some people. LOL.

Judging from the photo, I believe he is not being 'sarboed' but a PARKING IDIOT. The only reason I can think of is that he might be 'chopping' the lot for another car which belongs to his friend or relative.

Yeah, the score now stands at "two all". Thanks Chuck.

No Chuck, he wasn't "choping" the other lot for his friend or relative because I saw him drive off his car half an hour later.

Generally Singaporean has a kiasu nature. I tend to believe Chuck's observation, basing on the general average concept.